A PLATE OF chocolate chip cookies sits on the marble countertop in the kitchen of interior designer Erin Anderson’s one-story lake house.

April sunlight pours into the room, bouncing off the globes of glass pendant lights that dangle above the counter. It’s spring break, and Anderson’s three daughters—11-year-old Anna Grace and 7-year-old twins Lily and Claire—play and laugh in another room.

Anderson offers me a treat; it’s mid-morning, but never too early for chocolate. “I’m sorta known for these cookies in these parts,” she says with a laugh. “It’s a little extra salt. That’s the trick.”

That she could even make a batch of cookies in this kitchen is something of a triumph.

When she and her husband, Steven, bought the Sherrills Ford home in 2010, it was a foreclosure with a badly outdated kitchen. The cramped space was tough to move around in; dark teal cabinets made it feel even more claustrophobic. And the oven was barely functional. “The appliances came over on the ark, I think,” she says. “The oven wouldn’t fit a full-sized cookie sheet.” The family lives in Wilkesboro, but wanted a relaxing place to spend summer weekends. The lake house had potential, but it needed work. “Every time we’d come down here,” Anderson says, “I’d dream about how I was going to redo it.”

After battling the kitchen for a few years, Anderson, who was a high school history teacher for eight years, set out on an ambitious remodel to bring the house into this century. Her bright, Southern-inspired touch led to a vacation home that actually feels like a vacation.

“We don’t want one of these giant McMansions to take care of,” she says. “I’d prefer a smaller space where we’re all together.” 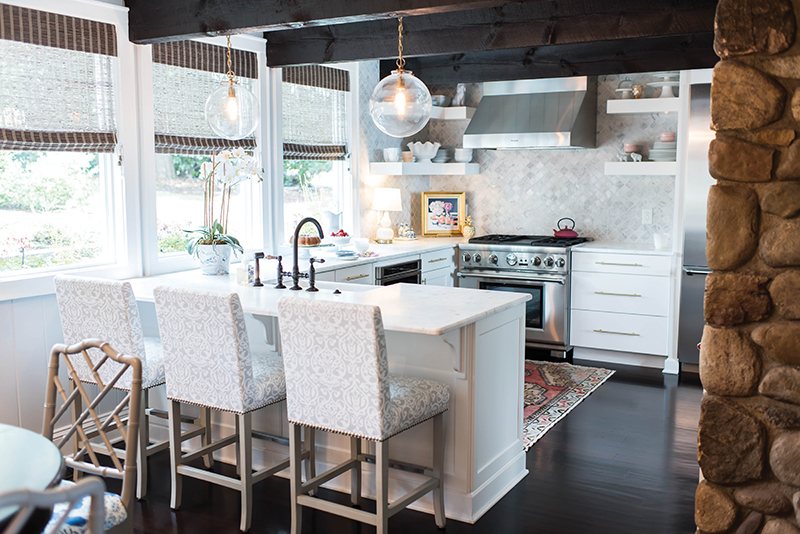 Anderson wanted marble countertops and open shelving in the kitchen from the beginning.

Anderson and contractor Pedicino Construction expanded the kitchen, ripped out the cabinets, and added open shelving above. Marble countertops, white lower cabinets, and gold hardware lend modern touches to the 1970s-era home. A nook in the back of the freestanding chimney became a coffee bar, stocked with mugs and a French press.

We walk around to the front of the imposing stone fireplace and into the living room, which bursts with sunlight from a row of windows that face the lake. Dark wood beams overhead stand out against the light walls. “When we first bought the house, no matter everything else, it was this fireplace and the beams that sold me,” Anderson says. “And then, obviously,” she points to the view from the windows, almost a panorama of Lake Norman. “When we walked in and I saw this view, I was like, ‘Sold! I’ll eat ramen noodles so we can have this place.’”

Through a set of French doors across the living room, the girls play with dolls on the floor of their bedroom. A brass sign reads “Crew’s Quarters.” Anderson converted an awkward porch—screened on only one side—into a bunk room for her daughters. She and her husband drew plans for four built-in bunks. The white beds with bright pink spreads provide space for the girls to sleep and play with each other, while mom and dad relax in the adjacent living room.

“When we’re down here on the weekends, we all hang out together,” Anderson says. “At home, our girls are in their playroom or their rooms.”

Although togetherness is important, every parent needs an escape.

A hallway from the living room toward the master suite underscores that point. The Andersons turned what could have been wasted space into a small bar with the same marble, cabinetry, and fixtures as the kitchen. An icemaker (“With, you know, the good ice,” Anderson says) stands by to help the couple prepare their favorite cocktails: a margarita on the rocks for her and a gin and tonic for him. 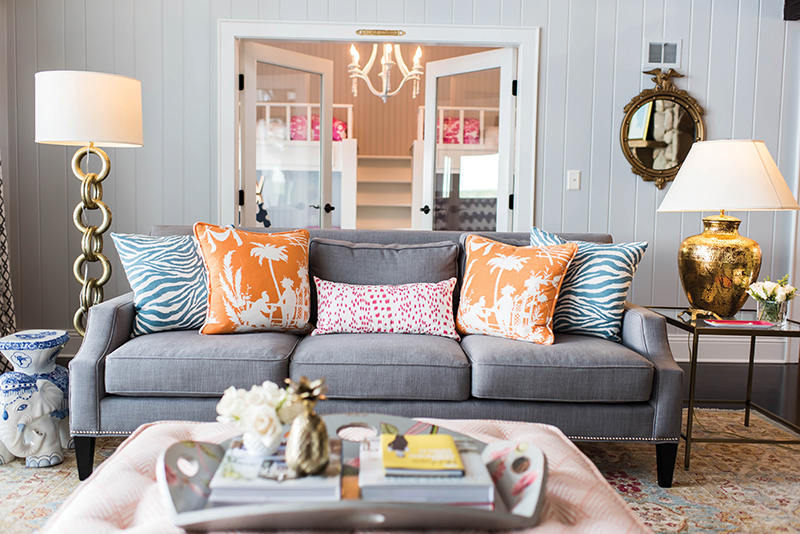 From the living room, a set of French doors opens into a four-bunk bedroom. The Andersons’ daughters sleep and play there while mom and dad relax by the stone fireplace. Bright colors pop from the neutral walls, which Anderson painted Sherwin Williams’ “Reflection” throughout the house.

They updated the ceiling, flooring, and design details in the master bedroom. A brass sign, similar to the one that hangs above the bunk room, reads “Captain.” But the master bath took the brunt of their renovations. Workers ripped the room apart, down to the studs, and centered a rectangular window for symmetry. Beneath it, Anderson added a modern porcelain, soaking tub. On the opposite wall, a large, glass-walled shower gives the room a spa feel.

Like all of the bedrooms in the home, the master suite has views of the lake. Three decks run the length of the house, beckoning visitors outside, where the family spends most of their time during summer visits.

White chairs against the gray exterior paint evoke a New England cottage; it’s easy to imagine a table scattered with candles and food, surrounded by barefoot kids and adults on a breezy night. Just off the deck, closer to the water, Adirondack chairs surround a stone firepit. “It’s the s’mores and wine spot,” Anderson says.

As we walk inside and back to the kitchen, where I’d left half of my chocolate chip cookie, Anderson explains that she and her husband wanted to create a space their daughters would want to visit, with friends and extended family. 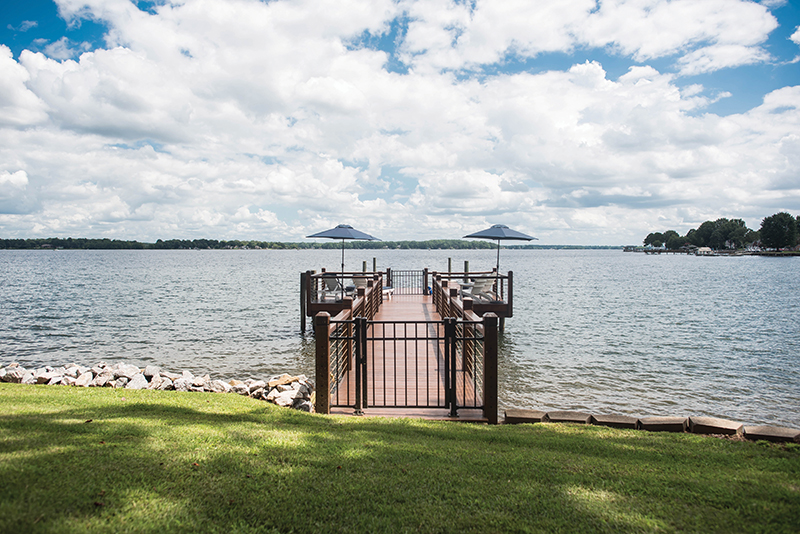 The home’s location, at the end of a cul-de-sac, comes with a remarkable view of Lake Norman, making for quick access to the water all summer long.