Long before Johnny Appleseed and long before Washington state became the nation's number one grower of apples, Henderson County was the birthplace of America's most iconic fruit 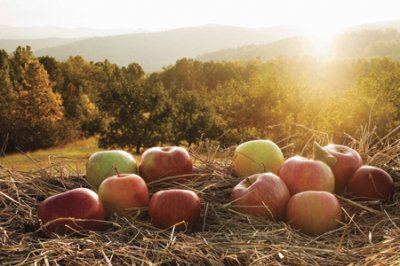 This was Cherokee country in the years after the Revolutionary War, when William Mills made his way to a lush, untamed basin surrounded by mountains not yet named by white settlers.

Mills had been a devoted Tory and survived the brief and bloody Battle of King’s Mountain by playing dead among the fallen Loyalists. But in the aftermath of war, he swore his allegiance to this new country and set out to explore it. Crossing the Blue Ridge Mountains, he settled the land that would become Henderson County. Though much of Mills’s story has been faded by time, his legacy remains here. He is said to have named these peaks—Bearwallow, Bald Top—and to have brought the first apples to the basin, seeding, as history tells it, 100 fruit trees every year of his long life.

Apples have flourished in the sunny, warm days and cool nights of Western North Carolina for more than 114 years, since the Hendersonville Times boasted of Mills’s orchards, "There will never be a time when western North Carolina fruit will not be in demand. Its flavor has no superior." Washington, the country’s top apple-growing state, might challenge that today (its slogan: "The Best Apples on Earth"), but apples remain a source of great pride and tradition in Henderson County, just an hour west of Charlotte. There, just driving along route 64 leads you to no fewer than a half dozen wooden signs for orchards and even more apple stands boasting freshly made pies, breads, and crisps, and crates full of apples glistening with the cool morning dew. North Carolina is the seventh-largest apple grower in the country, and Henderson County, home to September’s North Carolina Apple Festival for sixty-three years, is the number-one grower in the state, producing 65 percent of the state’s apples most years.

Of the 200 apple orchards that dot the Henderson County countryside, many trace back their lineage several generations. The region’s apple industry has changed significantly in that time. Advances in transportation and distribution brought more competition from imported apples, and advances in agriculture blurred the growing seasons of different regions. Today, most apples that were once destined for nearby processing and packing plants to be turned into juice, baby food, and other apple products are now sold directly to the customer, at the farm stand, or in the field, you-pick style.

"When we started, it was all red and golden delicious, Romes and Staymans—your grandparent’s apples. Now people want gala and pink lady and honeycrisp," says David Butler of Sky Top Orchard. He’s been farming the idyllic Mount McAlpine orchard for twenty-five years. The snaking, winding road up the mountain to the orchard was only just recently paved, making it easier to climb to the top and take in the view: mountaintops and valleys painted with brushstrokes of deep orange, yellow, and red. Thick-skinned Rome apples still dominate the county’s 5,000 acres of orchards, but smaller growers like Butler are coming to rely on picking for eating, not processing, apples. Twenty-five varieties—from August’s sweet ginger golds to late October’s hearty Arkansas blacks—stretch across Sky Top’s forty acres. "It’s a tourist business that sells apples now," he says. The orchard’s other sixty acres include a nature walk, hayride, and barnyard. "People come to picnic and play. We have family reunions and weddings. And apples."

"It takes twelve months to grow a good crop of apples," says Don Justus, a third-generation farmer at Justus Orchard in Hendersonville. That part hasn’t changed much: Henderson County’s apple farmers are still farmers, working year round tending the orchard in preparation for four months of harvest, always at the mercy of the weather.

In 2007, temperatures dropped into the low twenties over Easter weekend, devastating a significant portion of the apple crop. A midsummer drought stunted the rest, resulting in the state’s smallest apple harvest since 1955. In 2008, another year of drought threatened the harvest, but a deluge of late summer rain reinvigorated it, and Henderson County harvested a $50 million crop. This year’s unpredictable weather—a warm June followed by a cool July and August—has fooled apples into ripening early, but farmers predict a good harvest.

"I think it’s going to be a pretty good one," Justus says. "The apples have tremendous flavor and good size thanks to all the rain." And he’s equally optimistic about the future of the Henderson County apple tradition that has been passed down from William Mills.

"I think you may have to be born into apples," says Justus. His twenty-one-year-old son recently joined the family business. "But our thirty acres will always be apples, as long as the good Lord is willing."

April White is the author of the cookbook Latin Evolution. The former food editor of Philadelphia magazine, her food and travel writing has appeared in Food & Wine, US Airways magazine, and The Philadelphia Inquirer.

This article appears in the October 2009 issue of Charlotte magazine.
Contest of the Month