Let Charlotte natives teach you about where you live 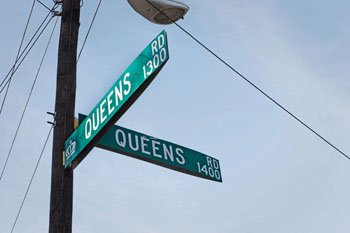 Attend a Charlotte 101 class and you’ll learn interesting facts about the city, such as why Queens Road intersects Queens Road.

If you pull someone's hair on this bus ride, you may end up in Biddlesville looking for cornbread on your own.

Longtime Charlotte residents Genie Hufham and Mary Schultz offer plenty of entertaining advice for students in Charlotte 101, their new class at Central Piedmont Community College. "If you ask me where to find really great cornbread or where to ride a bicycle—or where to go rent a bicycle—I've got the answer," Hufham says, laughing.

A Charlotte native, Hufham lives in Myers Park and has worked for years in the travel and tourism industry, as has Schultz, who lives in north Mecklenburg County. The two women met while taking travel classes ten years ago at CPCC and became friends. Last month, they launched the class to take the "fear" out of going downtown. Part history, part geography, and part bus ride, the two-Saturday class is an insider's guide to Charlotte.

"We'll cover all four wards," Hufham says. "We'll go out of the center city and look at the neighborhoods that began to grow around it," she says. Students will ride the red Gold Rush bus, which looks like a trolley on wheels. Landmarks downtown will be covered, and halfway through the ride the class will stop at the Visitor Info Center on South Tryon Street.

The class is for newcomers as well as residents who don't often stray from their part of town. "What I find, with the people in my area of the county," says Schultz, "is they say, 'I'm afraid to go into the city. I don't know anything about it.' "

This article appears in the March 2008 issue of Charlotte magazine.
Categories: Buzz > QC Culture, Feature, The Buzz
Contest of the Month