Local businessman puts his sports drink up against the big boys 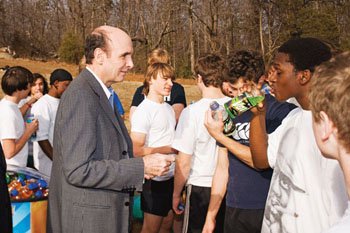 It's a classic David and Goliath story. In this case, David is Owen Ryan, a sixty-year-old high school dropout with an indomitable entrepreneurial spirit. Goliath is a multibillion-dollar sports drink behemoth known as Gatorade, which gobbles up more than 80 percent of the market. But Ryan isn't intimidated. He's armed with a new sports drink he developed called Volt, and plans on using it to "kick Gatorade's butt."

Prior to delving into the beverage industry, Ryan held a number of jobs, including doughnut-truck driver and dairy farmer. He also worked as a new-product consultant for companies such as Coca-Cola, Cadbury, and Anheuser-Busch. With a flair for brand creation and marketing, Ryan, who was living in New York at the time, decided to launch his own sports drink company.

In summer 2006, he moved his wife and infant daughter to the Queen City and set up shop in a small office on the outskirts of uptown. "I believed in this strong enough to invest my own money," Ryan says.

He created Volt with flavor developer Cydney Whitmoyer, and then tapped Charlotte's Independent Beverage Corp. to produce it. Last year, Royal Crown Bottling began distributing the sports drink to about 400 stores throughout the Asheville area. Ryan himself hand delivers cases of Volt to several Charlotte stores.

Ryan describes Volt's taste as midway between Gatorade and Vitaminwater. "Volt is formulated with 100 percent of the daily value of antioxidant vitamins B6 and B12, the energy vitamins, which are not in Gatorade," he says. "And we use some of the ingredients fueling the meteoric sales growth of Red Bull."

In September, former 7UP president Jim Harford joined the company to oversee retailer and bottler relationships (this brings Volt's number of employees to three). Moreover, Volt has replaced Gatorade as the official sports drink of North Carolina AAU baseball and softball.

Helping further spur on Ryan is a letter he says he received from Gatorade just before Christmas alleging "unfair competition," and stating the company was concerned some of Volt's advertising would lead people to think there was a connection between the two beverages. "I politely told them to take a long walk off a short pier, and then I mailed them a copy of the Constitution."

This article appears in the March 2008 issue of Charlotte magazine.
Categories: Buzz > Power
Contest of the Month