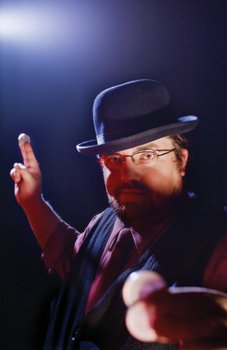 Hannibal the Magician is in the middle of a card trick when a cell phone rings. Without missing a beat, he steps to the edge of the stage and firmly but politely wrests custody of the offending instrument. After a tongue-in-cheek dressing down of the caller, he returns the phone to its chastened owner, and deftly resumes making cards appear in and disappear from the décolletage of two female audience volunteers, all to a round of enthusiastic applause.

In addition to sleight of hand, Hannibal is adept at razor-witted repartee that makes for an intelligent, sophisticated show unmistakably geared toward grown-ups. "I'm not your average tailcoat–and-bunny rabbit magician," he says.

Hannibal cites the Marx Brothers, Laurel and Hardy, and Charlie Chaplin as his inspirations. "A lot of the younger crowd hasn't really had much exposure to that kind of humor, so it's all new to them. They think I'm way ahead of my time, when I'm really falling back on things that I grew up with."

Born Christopher Hannibal and raised in Charlotte, the forty-two-year-old has been performing since age six (his grandfather, a former circus performer, taught him his earliest tricks). After graduating from UNC-Charlotte, Hannibal’s family convinced him to become an accountant, but cubicle life was one act he couldn’t master. At twenty-seven, he escaped for a full-time magic career that now includes restaurant appearances and a strolling act he performs at private functions and charity events.

Ironically, however, it's the custom-tailored corporate gigs he’s developed that earn Hannibal most of his income. "I'm in the enviable position of being one of the few artists in Charlotte who can make a living at their craft," says the married father of four.

Along with continued appearances with Big Mamma D’s House of Burlesque at the Visulite Theatre and at Harper's SouthPark, Hannibal hopes to bankroll one-man magic shows at theater venues such as the Booth Playhouse. A more complicated feat than pulling a rabbit out of a hat? Sure. But for Hannibal the Magician, it's in the cards.
Visit www.hegmagic.com for a list of Hannibal's scheduled shows.

This article appears in the September 2007 issue of Charlotte magazine.
Categories: Buzz > Spotlight
Contest of the Month