Living on the Edge

Charlotte's working poor are the subject of a new photographic exhibit 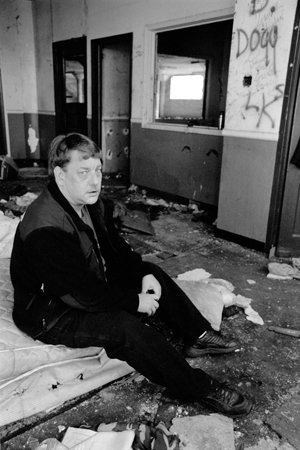 A hospital employee. A CMS teacher. A grocery store manager. Photographer Susan Sidebottom's latest project gives a face to a population that often goes unnoticed: the working poor. Through photographs and oral interviews, Sidebottom shares the stories of individuals and families transitioning from homelessness to subsidized housing. The exhibit, On the Edge: Homeless and Living Among Us, illuminates the make-or-break difference between a paying wage and a living wage. "They know they are always a step away—one paycheck away—from finding themselves homeless again," says Sidebottom. "There is never a feeling of complete comfort."

(Photo: For nine months, photographer Susan Sidebottom documented Charlotte's working homeless, such as the man here who revisited the abandoned building he once lived in years ago.)

Exclusively @charlottemagazine.com
Hear more from photographer Susan Sidebottom about the exhibit and her collaboration with Working Initiative for Supportive Housing (WISH) to create a DVD highlighting the difficulties facing Charlotte's working poor.

What led you to create this project?

I was in an underground passageway leading to the tube in London when my then four-year-old daughter dropped something. I bent down to pick it up and realized I was within arms reach of a homeless person. I looked up from where I was crouched and saw my passage from point A to point B in a completely different way. In just that instant I saw the dark, dank, graffiti-filled space from the eyes of the homeless person. I had not even seen him before I bent down, and that feeling of being in someone else's space without even having an awareness of the person stayed with me.

I came home and began researching the homeless population in Charlotte and became particularly interested in the working poor. Unlike the chronically homeless who you may see asking for change on the street, the working poor are a community that virtually goes unnoticed because they view their current state of homelessness as situational and temporary. The more I learned of the working poor in Charlotte, the more I felt the need and desire to bring greater awareness of the issue to the broader community.

This project is titled On the Edge: Homeless and Working Among Us. Explain what you mean by "on the edge."

The title has multiple implications. The participants in my project have all been homeless, but have been able to move into subsidized housing during the time I have known them. However, they know they are always a step away – one paycheck away – from finding themselves homeless again, so that there is never a feeling of complete comfort.

In addition, the people featured in the photographs feel on the edge of society and the greater community.  Even though they are working, like us, they feel that because they need assistance to live that they are not really a part of our community. They always feel just on the edge.

How did you find the people featured in the photos?

One of my collaborating partners for this project is Workforce Initiative for Supportive Housing (WISH). They are a wonderful organization providing subsidized housing and much-needed resources to aid in the success of the working poor population. They then introduced me to some of their partnership organizations.

I worked primarily with Charlotte Emergency Housing, Family Promise of Charlotte, Salvation Army, and Urban Ministry's Homeless to Homes program to identify people who we thought would be interested in sharing their stories so that others could benefit from their experiences. Over the last nine months, I developed relationships with the individuals and families, documenting through interviews and photographs their journey from homelessness to their current home.

Is homelessness a growing problem in Charlotte? What can people do to help?

Yes. Homelessness is a growing challenge, particularly among the working poor. The discrepancy between a paying wage and a living wage is creating much of the problem.

The individuals that I photographed are doing jobs that are vital to our community. These are the stories of a CMS teacher, hospital employees, food service providers, and a manager at a high-end grocery store. We are failing this segment of our community, and where we see this most dramatically is in the number of children in the CMS school system that is registered as homeless. As of May 2009, that number is over 2,900.

The problem is so complex that I recommend people reach out to organizations like WISH who are currently addressing the issue. There is need for appropriate housing, financial support and volunteer support.

What did you learn from this project?

Anyone can find themselves homeless, so I try to see all people as part of my community, realizing that the people I have photographed are at their core not that different from me. They want to have a nice home, provide food for their families, be able to give their children a birthday present, and have friendships that come without judgment.

I look at people differently. I take more time to show my appreciation toward people who provide services for me, such as the bagger at the grocery store, the bank teller, the fast food server, or the receptionist at my doctor's office. I try to have more grace.

What do you hope people take away from the exhibit at the Levine Museum?

I hope people leave the exhibit with a greater awareness of the difference between the working poor and the chronically homeless, a sensitivity and compassion toward those who are different, and a desire to act on behalf of the working poor so that they may feel connected to our broader community and appreciated for their contribution to society.

Are there any outreach programs attached/related to this exhibit?

Outreach related to the project comes in the form of youth and faith. We are working with The Light Factory and Trinity Episcopal School, where the students will be using this exhibit as inspiration to create their own art, photographs, or written word to explore art for social change.

We are also creating a DVD in partnership with WISH, using some of the photographs and my journal entries along with facts about the working poor population in Charlotte. We're coordinating a luncheon with Mecklenburg Ministries and the Urban ministry Center, at which the DVD will be shown and distributed to participating faith organizations. This event will coincide with Homeless Awareness Month.

Have you done other photography projects meant to bring awareness to social issues?

My first project addressing social issues was for the Department of Social Services. I photographed and interviewed homebound elderly who receive hot meals daily through the Senior Nutrition Program. The program caters meals to the health needs of each individual in an effort to prolong their well-being. The program is nationally recognized and has benefited those with diabetes, cancer and heart-related issues. I was proud to work with DSS in providing photographs and dialogue for them to use in their promotional materials and in aiding them to set the example for other organizations. A portion of the "Lifeline to the Community" project can be seen on my website, photographyreflects.com.

Were you active in the Charlotte community during the ten years you lived here?

I have a strong desire to connect with my community through public service. During my time in Charlotte, I was an active member of the Levine Museum of the New South's board, serving two terms. I also served 3 years on the Afro-American Cultural Center board and participated in Community Building Initiative's Leadership Development Initiative, which is a nine-month, intensive process focusing on racial inclusion and equity. I led adult Sunday school at First Presbyterian Church, and was engaged in fundraising for local and national politics.

This article appears in the October 2009 issue of Charlotte magazine.