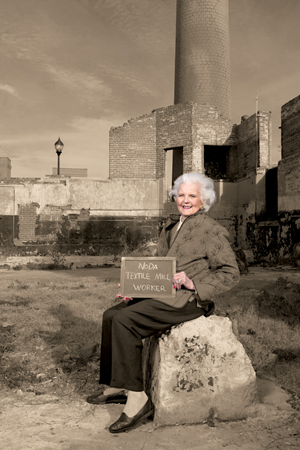 Lois Moore Yandle is a product of Charlotte’s NoDa neighborhood back when it was a milling suburb. About 30 of her family members worked in the textile mills there, and she eventually captured that life in a book, The Spirit of a Proud People. She is 86 and lives in SouthPark.

I’ve been back to NoDa many times since I grew up there on North Charles Avenue back in the day when it was a textile-mill village. I’m 86 now. My parents, Joe and Madeline, worked most of their lives as weavers on the first shift in Highland Park Mill No. 3, so when Heist Brewery opened recently in the old mill, they invited me to cut the ribbon. I didn’t drink any beer, though. I can hardly stand the smell of it.

I remember the Highland Mill. It was a big brick building, which was so noisy inside the weaving room where my parents worked. I had 30 relatives working in the mills, and I even worked in there one or two summers. The machines, the looms, they ran constantly, weaving fabric. The workers had to tend to the machines—if they found a flaw in the material, they had these picks—long, slender instruments—and they would pick at those places in the material. They didn’t get to sit down the whole time they were working, so at some point they added a little seat to the end of the weaving machines.

My mother’s hair—she had natural curls—would catch the lint, and when she got home, she had a head full of lint. Working in the mill was detrimental to my mother’s health. When you work with those heavy machines … it didn’t help my mother’s back or her kidneys. Mama died in 1966. She had a stroke. She was 60.

Did they like working there? Some did. Some didn’t. And the overseers could either be kind or ill as hornets. My parents were so tired when they got home from work. My mother had three children. We had a cow, until the county or city outlawed it. So she had all that to take care of—the milking, putting it in the refrigerator. We’d help her with the churning. Daddy—he’d come home and sit down; he had time to rest. Mama, bless her heart. It was a rough life for her.

But as hard as it was, it was a wonderful place to live. We felt so loved by the neighbors and everyone. That’s why I wrote The Spirit of a Proud People, because I do have happy memories. I just want people to remember NoDa as a great place to grow up. That was my place. —As told to Ken Garfield