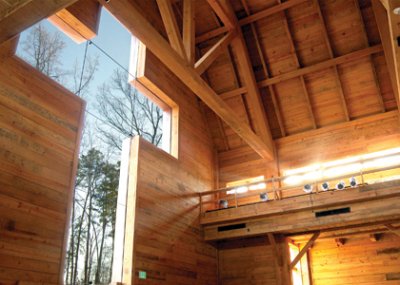 At the last stop in the Billy Graham Library before the gift shop and cafeteria, I’m looking up at the movie screen, watching the familiar altar call on film and trying to understand this lump in my throat.

I’ve seen this played out in person all over the world, from Charlotte to New York’s Central Park to Tampa to an undersize arena in the German industrial city of Essen, where the elderly remain haunted by their nation’s past. It’s easy to feel the power live—a farm boy from Charlotte promising a half century’s worth of the world’s people that if they answer the altar call and commit their hearts to Christ, their souls will never be the same. I’ve watched thousands respond to that invitation, pouring out of their seats as a choir sings “Just As I Am” and Graham promises that he will wait for those seated in the highest reaches. That part was always my favorite, Graham assuring the slowest that he and God will be here for them. Come.

This was a singular tradition in modern evangelical Christianity, and despite my reporter’s objectivity and Jewish faith, the emotion always got to me. Billy and I have our theological differences; I may have been the only bar mitzvah boy at some of his crusades. But as The Charlotte Observer’s religion writer and editor from 1992 to 2006, I saw how simple, honest, trusting faith could bring peace to troubled lives. I wrote the tough stories—Graham lamenting his political past, and apologizing after being caught on tape spewing anti-Semitic venom to old pal Richard Nixon. (Check out the 1971 photo of Nixon and Graham’s mother, Morrow, that hangs near the front door of the Graham boyhood home, which was moved beside the library.) But the real Billy Graham story, I came to learn, wasn’t Billy as much as it was the everyday people whose lives he lifted.

Billy’s crusades, though, are over. His power is in the past. His name barely resonates with many twenty-somethings who wonder “Billy who?” His glory days long gone, attention has turned to the Billy Graham Library out near the airport in Charlotte, a few miles from the dairy farm on Park Road near Woodlawn Road where he was raised. Billy Graham is still promising that God loves us—but now the assurance comes from old crusade footage at a new tourist attraction.

Could the power of God be present in a place like this?

I’ll answer that, and try to explain my deep emotions. But first we need to deal with the two library attractions that have stirred the most buzz: The talking cow and the grave site.

Kitsch and Reverence
Yes, as I’ve heard some skeptics scoff, a mechanical cow named Bessie seems goofy in a library whose underlying goal is to glorify Christ and maybe raise a few bucks for the cause. It doesn’t help that Bessie talks in an over-the-top Southern drawl about Billy leaving the farm to preach the “pure milk of God’s word.” But the times I’ve been there, I’ve seen grandchildren on their grandfather’s shoulders, stirred more by Bessie than by photos of Billy preaching behind the Iron Curtain. I’ve seen old folks, many riding hours on a church bus to get here from small-town North Carolina, snapping pictures of loved ones standing proudly beside that darned cow. This isn’t the Smithsonian, people. It’s a tourist attraction built to look like a barn, with a window in the shape of a cross and a cafeteria selling chicken salad sandwiches inspired by Ruth Graham’s recipe. Lighten up.

It took a little more work to come to grips with the grave site.

The Grahams—amid squabbling among their children if you can believe various newspaper accounts from earlier this year—finally decided to be buried at the library rather than in the North Carolina mountains they loved so much. Ruth Graham, of course, was laid to rest first. The grave site lies in a prayer garden fifty yards or so from the library. “Fairest Lord Jesus” and other gospel standards are piped in. Visitors can walk down a path to see the grave site, then sit on wood-carved benches to pray or reflect or decide where to go for lunch. Families can also pose for group photos in front of the grave site, holding small shopping bags filled with Billy Graham Library ball caps and sweatshirts. Worse, I’ve watched moms and dads yank their children off the knee-high stone wall surrounding the site, lest they tumble onto the soft green grass and what lies below.

Peaceful it ain’t. But by my fourth visit to the library grounds, I began getting comfortable with the blend of kitsch and reverence. Tourists snap pictures at Arlington. Security guards questioned me the morning I visited the final resting place of Dr. Martin Luther King Jr. in Atlanta. At the Billy Graham Library, visitors pray, pose for family portraits, and keep tabs on little ones. Having known the Grahams, I believe they’d be fine sharing their last place on Earth with the everyday folks who filled all those stadiums for so many years.

Why the Tears?
It takes about an hour to go through the 40,000-square-foot library. I cringe at the hokey, faux Berlin Wall meant to dramatize Graham’s part in bringing Christ behind the Iron Curtain. I love, however, the re-creation of the tent from the 1949 Los Angeles crusade that changed Graham’s life—the crusade at which newspaper mogul William Randolph Hearst ordered his editors to “puff Graham,” thrusting him onto the front page. So accurate is the depiction that the writing on the tent promises “Glorius” music as it did back then. More evocative than the old photos with celebrities like Muhammad Ali and Bob Hope are Graham’s Tarzan book from his boyhood and his Bible marked up with handwritten notes. And this is really cool: A letter that made it to Graham’s old headquarters in Minneapolis, addressed to HEAVEN, Minneapolis, Minn.

Then you come to the end, squeezing into the small theater with the same folks who came to hear Billy a lifetime ago—blacks, whites, grandparents, church groups from Kannapolis, and Sunday school classes from Concord. It’s the final moment, as it was at all those crusades all over the world, Billy Graham exhorting us to come forward, we’ll wait for you. Only now, it’s him on film, from years ago.

Is the power of God still here?

For me, absolutely, and with poignancy.

I covered Billy Graham for more than a decade before leaving The Observer last year when something deep inside told me to go write for a ministry. I got to know him, his wife (the sassy one in the bunch), and several members of the family. The season that a buddy and I coached his great-nephew in Y basketball, we had this crazy dream of getting Billy to come and give the pregame prayer. Neither of us had the chutzpah to ask him, however. One night, years ago, when Ruth Graham was sick, I came home to a message flashing on my answering machine. It was Billy, calling to share a long-winded update, sounding more like a worried old husband than modern times’ most famous religious figure.

Billy Graham long ago became personal for me. The Billy Graham Library has become an extension of an association that opened my eyes as a young religion writer to the majesty of believing. As the library keeps pulling me back for another visit and another chance to watch people appreciate what I long ago learned to appreciate, I’m understanding what’s at work.

I’m stirred by the Billy Graham Library because, like so many in Charlotte, I feel a hometown pride, a sense that he belongs more to us than to the world. Charlotte can grow larger and more diverse, but this will always be the place that shared Billy Graham with the world.

I’m moved because I respect Billy Graham’s life and affirm his legacy. His message wasn’t complicated. It was innocent, sweet, and, especially in the later years of his life, it honored the convictions of people of other faiths. Never once did his message leave me uncomfortable. The library reflects that.

And, finally, after all these years, I’m moved because this I know: Years from now, when the Grahams are a part of history, we’ll have this library to remember them by. Tourists will still crack up at the mechanical talking cow. Our children’s children will climb onto that knee-high stone wall surrounding the grave site and have to be pulled off by mom and dad.

But we can live with that because this place keeps him alive.

Come, he says in that old clip on the screen at the last stop in the Billy Graham Library. We’ll wait for you.

It’s going to get me every time.

See for Yourself
The Billy Graham Library is located at 4330 Westmont Drive, just off Billy Graham Parkway. The permanent
exhibit is open Monday through Saturday, 9:30 a.m.-5 p.m. Admission and parking is free. 704-401-3200,
www.billygraham.org .

This article appears in the September 2007 issue of Charlotte magazine.
Categories: Religion
Contest of the Month