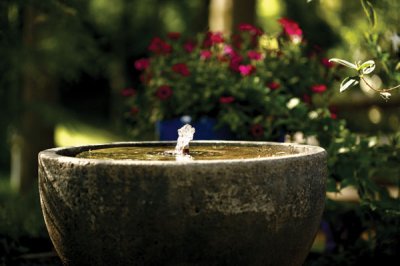 While I walked through my neighborhood at dusk one evening, the structures beckoned to me. Mysterious wooden boxes glowed on the hillside above a stream, lit from within like Chinese lanterns. What were they? What was their purpose? They were too small to be primary residences, yet they showed more signs of life than the average garage or storage shed. Only when I visited the property during last spring’s Plaza Midwood Home and Garden Tour did I learn how well the outbuildings were adapted to the surrounding land and to the rhythms of one family’s life.

Architect Peter Wong planned the garden site to include a workshop and carport for himself, a glass-walled study for wife Pamela Grundy, a walled patio and picnic area, and even a playhouse for the couple’s six-year-old son, Parker. Three terraced levels rise gently from the streambed. Aside from the workshop and carport, the outbuildings are oriented to offer views of the creek, garden, and surrounding neighborhood rather than face the back of the main house.

“The main house was all about being vertical,” recalls Peter. “This time we wanted a more horizontal relationship with the land. These are rooms that have been rolled like dice.”

Raised garden beds meander casually around the outbuildings, softening hard edges while stone paths invite visitors. The eye is drawn first not to the outbuildings or to the garden, but to the landscape as a seamless whole. While the structures are modern in style, use of native Southern materials like cypress, cedar, and fieldstone help them blend in with their surroundings.

“Some people think they look Japanese, or look like tobacco sheds. There’s a vernacular to it,” says Peter.

Tippah Avenue is one of the most architecturally influential streets in Charlotte. This is where Kevin Pfahl pioneered the revival of the Craftsman style in the late 1980s, and many architects still live in the Plaza Midwood neighborhood. Yet, even here on Tippah, the Wong-Grundy property stands out for its innovative use of what many builders would consider a “problem” site.

“The whole area was called the jungle,” explains Peter, who bought the lot in 1992, shortly before meeting his future wife. “Kids used to come here and play. Nobody wanted to build here because the land was too steep and irregular.”

A creek divides the lot, with steep slopes rising up on either side. The conventional solution would have been to flatten the entire lot and build the house in the back. Instead, Peter chose to build the main house close to the street and preserve the original contours of the land.

Eight years later, with their first child on the way, Peter and Pam knew they needed more space. Inspired by a trip to Charleston and its traditional arrangement of courtyard spaces, they decided to plan a series of garden outbuildings rather than simply add on to their existing 1,600-square-foot home.

“Peter designed the main house when he was a bachelor,” Pam laughs.

This time around, the couple worked to build spaces that would meet the needs of the entire family. Peter is a professor of architecture at UNC-Charlotte, while Pam holds a Ph.D. in history from UNC-Chapel Hill. Finding two university jobs in the same place is a challenge for many academic couples. Pam chose a creative solution: rather than applying for teaching jobs across the country, she would research and write history books out of her own home.

“Pam’s desire was to have a peaceful writing pavilion to be an independent scholar,” says Peter. From 2000 through 2003, Peter and Pam worked to make this shared vision a reality, with the help of contractor Frank Hesse, structural engineer James Warner, masons (and former students of Peter’s) Steve Carpenter and Aaron Brindle, and electrician Jimmy Stanley. Plans exist for a future conversion to a guesthouse and spa, although the family seems in no great hurry.

In the meantime, Pam has published a book on the history of women’s basketball and has an eighth-grade North Carolina history textbook coming out later this year. Her success has been aided by a working environment that seems to be any writer’s dream. Broad eaves and floor-length glass windows create an atmosphere that is sheltered, yet open to the landscape outside. Simple materials like concrete pillars and renewable cork flooring give the study’s interior a sense of grounded, unpretentious calm.

Any time Pam wants to take a break from her work, there is always the garden outside. Even while we are speaking, she takes a moment to weed, tucking a jasmine flower behind her ear. “I try to have things look interesting year round,” she explains. “But I keep running out of space for plants!”

Among her favorites are roses and irises, as well as the bulbs her mother gives her each year for her birthday and the azalea bushes bought in bucket containers twelve years ago, now grown to the size of a Volkswagen compact car. Near the stream, a rough granite bench overlooks pampas grass, Florida jasmine, and forsythia.

The couple tells me that they salvaged the granite block from a neighborhood creek. Farther up the hill, what I took to be a work of abstract art turns out to have a very practical function: a length of oxidized iron chain channels water into a concrete cylinder that is itself a salvaged storm-water drain. These reclaimed materials have a clean elegance that harmonizes with the rest of the site and with Pam and Peter’s commitment to environmentally sustainable design.

The roofs of the outbuildings provide another example of a solution that is both aesthetic and earth friendly. Made of corrugated steel—a decidedly contemporary material—their generous, overhanging eaves echo the lines of period Plaza Midwood bungalows nearby. This same design eliminates the need for gutters, reducing runoff and erosion by allowing rainwater to gently soak directly into gravel beds. Exposed ends of the wooden roof beams are painted using a Japanese technique to reduce water absorption.
“Minimalism is actually really hard to do,” says Peter. “The reason you use molding is to hide mistakes.”

The design of the site has earned Peter a merit award from the Charlotte Chapter of the American Institute of Architects, not to mention curious onlookers driving by their house and wanting to know more. Despite all the recognition and attention, the couple believes that a conventional single-structure remodel would have done more to maximize their property’s value. But rather than seek the best investment return, they chose the design that would give them the best experience while living here.

“That’s part of deciding to stay in a place,” says Pam. “It’s a part of your house being somewhere that you call home.”