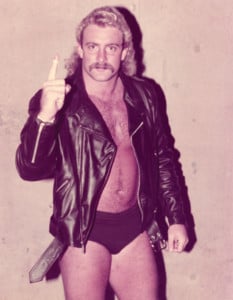 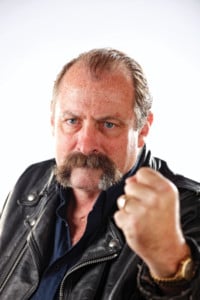 Magnum TA's fast-rising career ended abruptly in 1986 when his Porsche 911 Turbo careened into a telephone pole on Sardis Road, five minutes from his home.

"I hydroplaned on a wet road in pour- ing-down rain. My head hit the roof and I broke my neck.I was paralyzed from my neck down," recounts Terry Allen, fifty-one. He was a natural in the ring. A charismatic, good-looking guy with a curly blond mullet and mustache, he easily assumed the role of baby face."I was twenty-seven years old, at the top 3 percent of people in wrestling in terms of rankings and popularity polls, and was slated to have a run with the world championship. I thought nothing could go wrong."

Five months in the hospital and a year and a half in outpatient therapy enabled Allen to walk again. "I'm ambulatory without having to use a cane or braces, but I've got a severe limp and no motor skill function with my right hand. I learned to be left-handed. It's all I've known for twenty-three years, but I still remember things not having to be that way."

After working behind the scenes for NWA, Allen started a construction business in 1995. It closed in 2007 when his twins were born seven weeks early.

His long 1980s coif is clipped now, but he still rocks the look of a friendly biker. Allen lives in the area and is a safety and quality manager for Nsoro, AT&T's wireless construction vendor in the Carolinas. The Virginia native and father of seven ("three by blood and four by marriage"; in an odd twist, he married Tully Blanchard's ex-wife) remembers his ring days fondly.

Like fans, he mentions the 1985 "I Quit" match with Tully Blanchard (a bloody cage match in which he forced Blanchard to submit) and an intricate feud with Nikita Koloff among his career highlights. "The performing part of it was the most enjoyable thing I've ever done. You got immediate gratification. You'd be in the focal point of 10,000 or 20,000 people, getting that adrenaline rush and feedback from the fans," he says. "That's a hard thing to replace in the normal working world. I don't miss the traveling in and out of airports and taxi cabs, but performing in the ring was pretty amazing."