In the decade since Joie Lassiter opened her gallery, Charlotte has developed the makings of a real contemporary arts scene 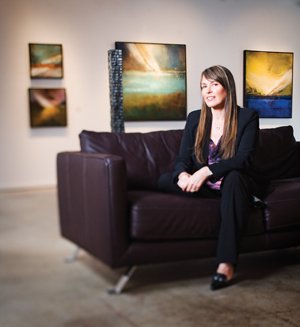 Joie Lassiter's eponymous gallery in South End has helped pave the way for emerging contemporary artists in the region as well as create a home for modern artists from around the world.

Sitting in a chair between the stark white walls of her minimalist gallery in South End, her long brown hair draped behind her shoulders, a cup of tea in one hand and a “biscuit” in the other, Joie Lassiter laughs as she explains why her gallery might seem a bit sparse. “We wanted to create a space entirely conducive to [the art] and pointing to the art, not at the carpet or furniture,” she says. She’s laughing because there is no carpet on the cement floors and very little furniture.

Lassiter says she’s finally found her arts district home in South End, the one she sought for her eponymous gallery for years. She chuckles again as she remembers the Charlotte contemporary-arts scene upon her arrival a decade ago.

“It was a lot different,” she says in her charming British accent. Still, she insists that she wasn’t in any way discovering uncharted territory. “I don’t want this to sound grandiose or that nothing was here until we came along,” she says. In particular, she cites the Jerald Melberg and Hodges Taylor galleries, which had exhibited some of the work that Lassiter would later take pride in showing. “It wasn’t so much that [Jasper] Johns and [Robert] Rauschenberg and [Jim] Dine had never been in town before,” she says.

But the Joie (pronounced like “Joey”) Lassiter Gallery came along before the McColl Center. Before the Mint Museum of Craft + Design. Until the Lassiter gallery, such high-brow contemporary artists had never been the focal point of one place. Lassiter wanted to create a space that lived and breathed for artists like these. She wanted to help kick-start a contemporary-arts scene in a city where none had previously existed. And in the ten years since she and her husband picked up and moved from Hawaii, the two previously named museums have opened, as well as a host of new galleries, and public art has popped up all over the city. And with two new museums on the horizon, Charlotte is threatening to develop its own full-blown contemporary-arts scene.

Lassiter and her husband, Michael, a musician who sings and plays the guitar and bass, opened their gallery in 1997 on East Ninth Street in uptown. The couple was originally from England but had recently lived in California and Hawaii (Lassiter says she’s a West Coast girl at heart). They were looking for an East Coast location as a halfway point between their two homelands. When she saw a picture of Charlotte’s skyline on the Internet, she was sold.

“We came in from the outside and presented a space that was reminiscent of a Soho [New York] type gallery,” she says. “Our vision was to simultaneously show compelling and provoking art that, at the time, didn’t have a lot of chance of being sold but that really opened people’s eyes up to new materials and new ways of seeing.” One of her early projects was a twine installation created by Seo Eo, an artist and professor from East Carolina University. Lassiter even had dancers perform within the framework of the twine. “It was insane. It was a trip,” she says.

Her husband helped to design the space and contract the work that needed to be done. She found an early ally in Hugh McColl, former chairman and chief executive officer of Bank of America. “Mr. McColl was really beginning to focus his attention on the arts,” Lassiter says. “He’d come to realize that a city would never be a desirable, magnetic city unless it had a strong art and cultural hub.” McColl helped to position galleries in new buildings that Bank of America was building in the late 1990s, offering reasonable rent so the galleries could afford to be in high-end spaces. “It was very helpful and definitely gave uptown a newer profile,” she says.

In 1999, two years after Lassiter opened her gallery, the McColl Center for Visual Art debuted, and with it came a surge of international artists who shook up the arts in Charlotte. Wesley Mancini, a renowned fabric designer and contemporary-art collector, serves on the center’s board. “It has dramatically changed the arts scene,” Mancini says.

Through the center’s residency program, regional and international artists come to Charlotte and devote themselves to art and the community. “They go into the school system. They’ll have [public art] projects with the light rail,” Mancini says. “They really focus on community outreach.” The artists not only get a place to work and a place to live, they also receive a stipend—they can pursue their passions without having to worry about where the rent money will come from.

Maja Godlewska and Shaun Cassidy came to the McColl Center for residencies, and now Lassiter is proud to call them regional artists. “These artists all came to Charlotte around about the time that I did, and, really, we all grew together,” she says. Godlewska came to Charlotte from Wroclaw, Poland, one of Charlotte’s sister cities. Her richly textured abstract paintings have been shown in galleries—including several shows at Joie Lassiter Gallery—and museums across the world, from Australia to France. Her Fifth Continent, a dark, muted juxtaposition of a classical European nude with Australia’s landscape, fractured with harsh white brush strokes, is in the permanent collection at the Mint Museum.

London-born sculptor Shaun Cassidy, who lives in South Carolina, also took up a residency at the center. He’s also had several shows at Lassiter’s gallery, and much of his work, including curvy, imaginative metal sculptures and white ceramic abstractions, is now scattered through the public transit system. Lassiter, having grown up in art-rich Europe, recognizes the importance of public art like Cassidy’s. “People can go to a game, walk down the street, saunter through a park, and without trying to, they can encounter art,” she says. It becomes a part of their lives.

Lassiter works with Hanzal to get work shown in the museum and also to sell works to collectors who most likely will donate one day. “She’s been great as far as helping introduce me to collectors and helping build relationships between collectors and the museum,” Hanzal says. “Obviously, she’s representing people that the museums are interested in including in exhibitions.”

Lassiter remembers the day when she’d be thrilled to see fifty people at an opening; now she sometimes sees 500. She says she hopes that, by selling quality work and introducing collectors to curators, she can do her part to add to the museums’ collections. She’s happy to announce that Bob and Linda Van Art, two collectors who have been buying pieces from her gallery since 1997, will be donating their entire collection to the Mint, which includes many works by Robert Lazzarini, a top New York artist famed for his distorted and abstracted portrayal of actual objects, and is valued at more than $200,000. Hanzal says she is very pleased with the donation. “We’re relying a lot on collectors to donate gifts to the museum to build our collection,” she says, noting that acquisition funds are often not enough to cover the rising costs of contemporary art.

A new center city Mint Museum is set to open late in 2009 or early 2010, which will give the museum much more space to display its collection. The Bechtler Museum of Modern Art will open around the same time. Lassiter is pumped. “Now we are close to creating a museum plaza, just down the road here, which is one of the most exciting things to happen, perhaps ever,” she says. “Inevitably if someone comes to see the Picassos and the Modiglianis at the Bechtler, they are going to wander into the Mint.”

After ten years here, Lassiter says she feels connected to the local arts scene. “I’ve been here long enough now to have really dug some roots. I’ve had time to grow a lot of affection for the city,” she says. “This is what I would hope for Charlotte: that we can amass people within this city to collect significant art that can be gifted to the museum. This is the depth of being a good dealer. . . We, the dealers, can make a difference in terms of the shape of art in our city," she says.

"It's a very, very weighted profession. You have to come at it with both your head and your heart."

This article appears in the September 2007 issue of Charlotte magazine.
Categories: Buzz > Arts
Contest of the Month