Marc Jacksina: A Chef and His Kitchen

The Earl's Grocery chef shares some of his favorite things

CHEF MARC JACKSINA likes the fact that most people who come to Earl’s Grocery don’t realize he’s the chef. That’s the way it used to be in his profession. But wherever the former Halcyon, Nan and Byron’s, and Lulu chef goes, good food follows.

He recounts memories of his childhood in Utica, New York—eating radishes straight from the ground, his grandmother’s chili sauce— and stories of his two sons, who inspired the biscuit recipe that Jacksina uses at Earl’s. Here, the chef shares a few items that are always in his kitchen, no matter which one he’s in.

Pimento Cheese
Jacksina didn’t enjoy pimento cheese until he tasted Bonterra chef Blake Hartwick’s recipe when they worked together years ago. It had fewer ingredients, and changed his mind about the spread. “Now, I have to have this in my house,” Jacksina says.

Custom Ironman Forge Knife
“This is the Green Mile. I’ve fallen in love with this knife. … I cook at home with this one on a Sunday night.” 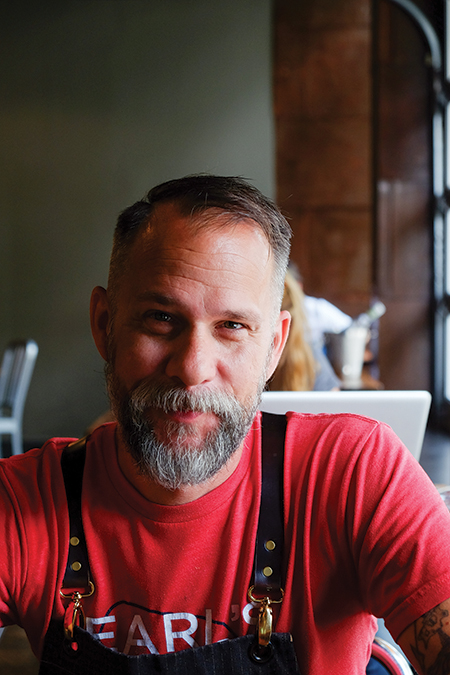 Wilco CD
“A majority of my cooking career, Wilco has always been there. Particularly disc two of Kicking Television, their live show in Chicago.”

Gochujang
In Utica, New York, where Jacksina grew up, red pepper flakes pulverized in a meat grinder are called Utica Grind. Jacksina discovered gochujang, which looks similar but has a bright, smoky flavor, while shopping at an Asian market. Now, he says, “it’s been all over my menus all over Charlotte.”

Radishes
“These are, to me, the most perfect food in the world. … Some of my earliest food memories as a kid were pulling radishes out of the ground. Wipe off the dirt and you eat them.”

This article appears in the August 2015 issue of Charlotte magazine.
Categories: By Kristen Wile, Quick Reads, The Buzz
Contest of the Month