Charlotte already has a park uptown, and it's only ever used by people who are upset about something

A few weeks back, former Charlotte Observer columnist and noted lover of zoning Mary Newsom wrote a smart piece about the new Bearden Park in uptown's Third Ward, asking whether it would be a success or failure. While talking about it, she buried the lede (emphasis mine):

Will it be as beloved as Freedom Park on East Boulevard or as forsaken as Marshall Park on McDowell Street – an Urban Renewal-era assemblage of concrete, grass and shrubs that replaced an intricate African-American neighborhood called Brooklyn? Most days Marshall Park attracts a few tourists and office workers and flocks of Canada geese. Its forlorn existence proves a park is not automatically the best use for urban land.

In short, Marshall Park is terrible and nobody ever goes there. Actually, that's not true. People go there when they are upset about something, as evidenced by the Occupy Charlotte encampment there during the Democratic National Convention, which managed to be something like eight blocks away from everything else that was happening at the DNC. They had to get out and march away from the park before anyone could possibly see them:

PROTESTERS (chanting): We're here!
EVERYBODY ELSE: You're where?

More recently, Marshall Park hosted a Moral Monday protest, which drew hundreds of people who, conveniently, had a lot of concrete to stand on. The park has an amphitheatre and a nice view of uptown Charlotte, which means it looks nice with a crowd in it, which barely ever happens. 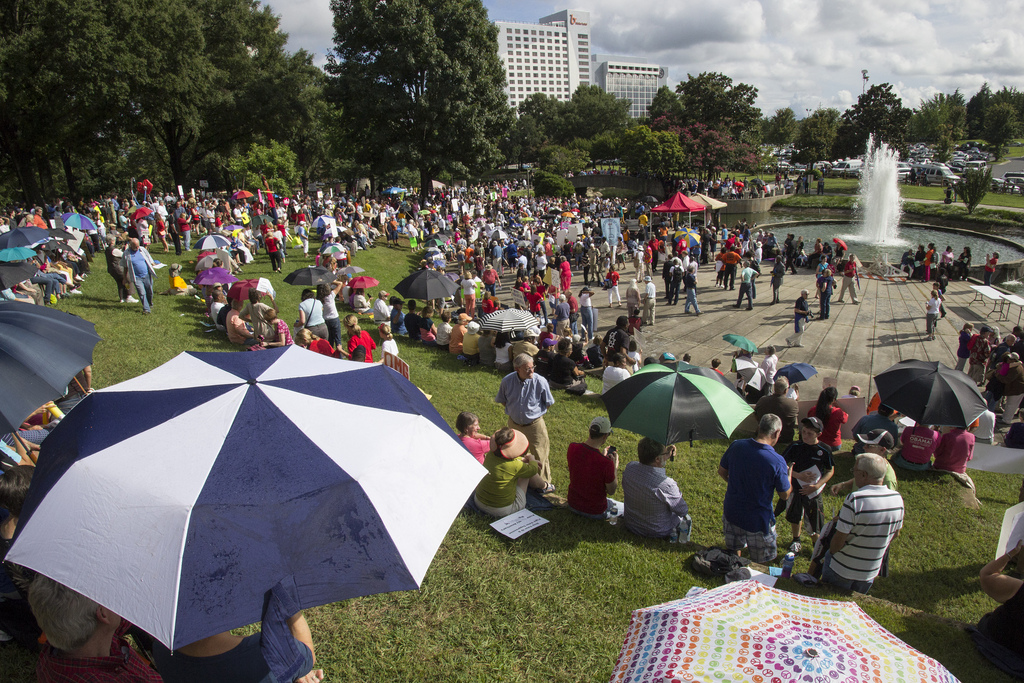 It also happens to be bland enough to be mistaken for Washington, DC transit infrastructure, as evidenced by its supporting role as the Farragut METRO station in an episode of Homeland.

The park has just four tips on FourSquare, two having to do with photography, the other two warning of angry waterfowl (Side Note: Do people use FourSquare anymore?). On Yelp, a user named David E., who swears he saw Isaac Hayes perform there once, has this friendly review:

But it's actually not a bad place. Other than the location. And the trash. And the crap in the water. And the homeless people. And that there really isn't anything to do. And because of all the asphalt it can get really hot, and since there is like one bench, you can't sit back and just enjoy the park.  In fact, with all the parking lots, I'm not sure if it is really a park.

One guy did give the park five stars on Yelp. He is from Georgia. 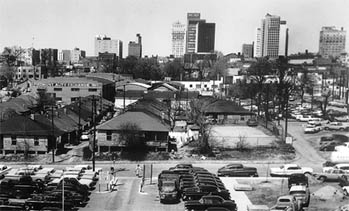 The park itself is named for James Marshall, Charlotte's city manager in the 1930s who supposedly looked out over the land from his office at old city hall and thought it'd be great to have a park there. Of course, in Marshall's day, the park was home to an African-American neighborhood named Brooklyn which was plowed under in the 1970s in the name of urban renewal. In 1973, the park opened and has become a favorite of pooping geese ever since.

To be fair, things built in the early 1970s look downright Soviet for the most part, and the neighborhood around Marshall Park today is mostly made up of places people drive to and immediately leave afterward (The county jail, the Aquatic Center, parking garages, The Blake Hotel and the now-vacant Charlotte-Mecklenburg Schools Education Center). Nobody lives near Marshall Park. By comparison, Freedom Park is surrounded by a neighborhood, is much bigger and greener, and is in all ways different. Bearden Park looks new (for now), and it has a condo tower right across the street.

So what can you do with Marshall Park? The city and county have been trying to dump off the park, most notably as part of a Rubik's Cube-style land swap deal to entice the Charlotte Knights to come to uptown. After years of dismissed and re-filed lawsuits, the Knights will finally play baseball uptown this spring, albeit in Third Ward next to Bearden Park. That left Marshall Park to languish as a concrete duck-friendly uptown tundra, which is worth somewhere in the neighborhood of $13 million but worthless to people, apparently. The city's still pushing a plan to move the property to an apartment building developer. I can already see the move-in banner now: Marshall Towers: A nice place to live but you didn't want to visit there.

Look, I feel for Marshall Park, as much as anyone can feel for a concrete-dominated city block. It's a victim of circumstance and poor planning. It has a nice fountain. It's a decent spot to get your picture taken. But it's time for this place to go. The sooner we can make it something else other than an angry urban poop-scape, the better.

Categories: The Buzz, Way Out