Leave it to the purveyor of period-inspired gowns to capture that je ne sais quois of Paris in its prime. Enamored with the mystique of the Belle Epoque, Anne Barge concocted an enchanting collection of bridal confections fit for the most sumptuous Parisian soirée. If ever there were a time one felt like a princess, it would be in the swanky confines of the Ritz Paris, sipping champagne with the likes of Coco Chanel and Hemingway. And what better time to channel that high society sophistication than on one's wedding day? "You can just imagine bridal in the gilded age of Paris!" Barge gushes with unabashed delight. Her candid penchant for the collection had me dreaming up dresses in a state of Parisian wanderlust before a single gown hit the runway. Cue a compilation of cheeky French tunes and a bevy of model brides sauntering the catwalk in sleek silhouettes, immaculate bustier tops and mille-feuille skirts, and I was instantly transported to The City of Lights in its heydey. Though the collection took a historic turn from Barge's usual '50s and '60s nods, it remained in keeping with her signature aesthetic: "The Anne Barge bride is classic, refined, understated and modern. But not trendy. She's that girl who loves Audrey Hepburn and Grace Kelly." After all, timelessness in dress is the French way. And Anne Barge brought it to the States with this  collection in the most impeccable fashion. 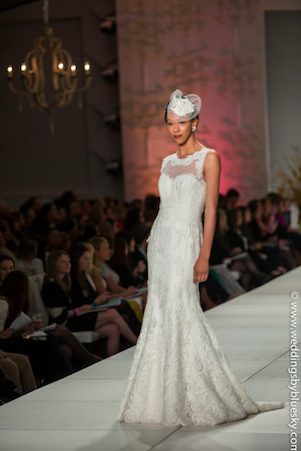 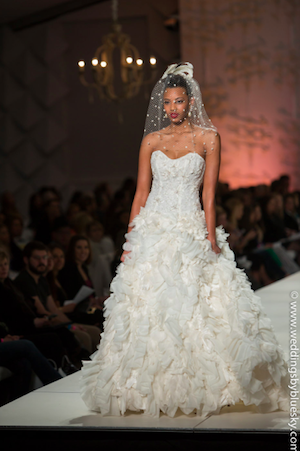