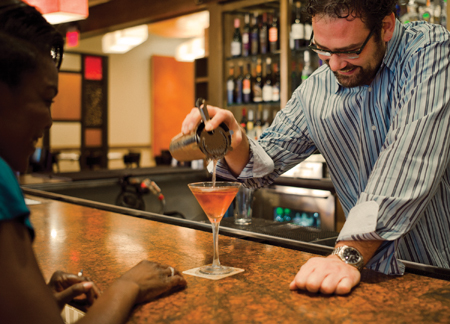 Miki Nikolic learned how to pair complementary flavors as a student at a culinary academy in his native Serbia. Since then, he’s worked with chefs including Wolfgang Puck, Mario Batali, and Michael White. As the bar manager at e2, Nikolic drew from his experience in the kitchen to come up with the specialty cocktails menu—including making all of his simple syrups and mixes from scratch. Witness the Grass Hopper, a Nikolic concoction of Hendrick’s gin, wheatgrass, jalapeño simple syrup, lime juice, and cucumber water. “Herbs are not just for cooking,” he says, adding that the chefs at e2 share new ingredients as they come in. “They say, ‘We just got this in, you want to play with it?’ It’s fun. That’s what bartending is all about.”

What are the most important traits of a good bartender? “Knowledge, personality, and speed,” he says. “Especially knowledge. You’ll be
questioned and you don’t want to look like a schmuck.” 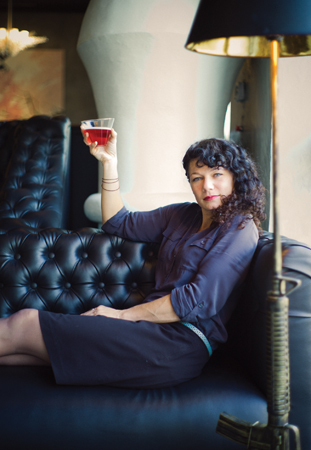 Carrie Geisler started bartending to pay her way through college—but she kept her night job even after earning a degree in geography and launching a frame shop out of her home. When a fire destroyed her home in May, she realized it was time to embrace bartending as a career instead of a side gig. “[The fire] put things in perspective in more ways than one,” she says. “I really like [bartending], and it’s what I’m really good at.”
She’s proud of the originality of the specialty cocktails at 5Church, particularly the Viper—a drink featuring Patron Silver, orange liqueur, and fresh-squeezed citrus—but when she’s behind the bar, Geisler focuses on the guests first. And that includes being a great conversationalist. (If she could choose her own job title, it would be “therapeutic alchemist.”) “I really consider myself an old-school
bartender,” she says. “You will leave here changed.”

Best bartending scenario? “I love it when someone sits down and doesn’t know what they want to drink,” Geisler says without hesitation. “That’s my favorite. I kind of make it a point to be unstumpable.” 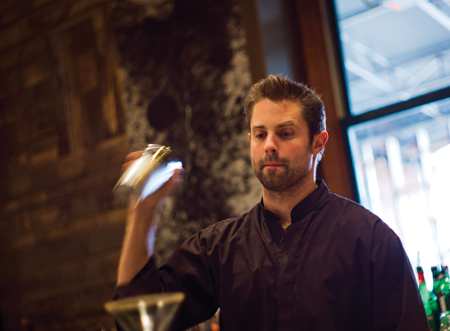 Robbie Robinson planned to become an attorney, but after graduating from State University of New York–Oswego and working at a few desk jobs, he decided he needed a new career plan. Considering that he’s an adrenaline junkie (he drives a motorcycle and is studying to become a skydiving instructor), it’s no surprise that he has a hard time keeping still—which makes working behind a bar exactly the kind of fast-paced gig that he finds exciting. “I meet a lot of new, interesting people all the time,” Robinson says.

He likes Osso’s role in the city’s restaurant scene, noting that its lounge atmosphere gives guests a traditional dining experience that easily carries over into late-night. “I think we’re kind of a nice little niche,” he says.

Little-known fact about the bar at Osso:  “If you order something we don’t have … we’ll make sure it’s here for you the next time around,” Robinson says.