There are few things more exhausting than an infant's frequent, abrupt, witching-hour outbursts and feedings—that is, unless you're like Janet Wheeler Gilani, who had a secret weapon that kept her from falling apart or asleep on her feet. 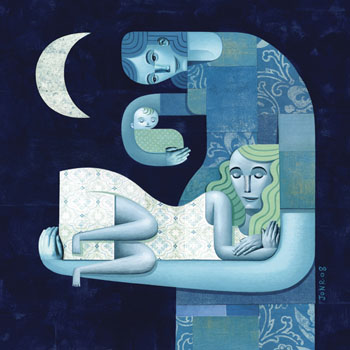 That weapon? A night nanny. Like a modern-day incarnation of the baby nurse of yesteryear hired by an ever-so-fortunate governess to meet a child's every need, today's night nannies are helping an increasing number of practical parents in Charlotte manage their newborns' first days and weeks. Unlike a regular babysitter, the night nanny is often a certified expert in infant care who trains the parents and assists in everything from lactation to nighttime bottle feeding and umbilical cord care for about $25 an hour.

To some this may seem an extravagance, but for moms like Gilani, the night nanny was a godsend.

"I waited a very long time to have this baby and knew I needed help," says the Charlotte banking executive. "I had no family near me and didn't know a thing about babies."

But critics of the night-nanny phenomenon worry that it can interrupt the bond between parent and child.

"The infant is looking for that familiar face, that familiar smell, and that physical touch that comes uniquely from Mommy and Daddy," says Carrie Reinecke, a therapist with Carolina Parenting Solutions. "These first moments become the foundation of our personal sense of self and security, as well as that first loving attachment…I think there would be something essentially missing for Mommy and Daddy to farm out that footprint to someone who is likely only temporary."

Fans of night nannies, though, believe they're just one more tool in a new parent's arsenal and won't hurt the child. Parents are better educated and better rested, and their home life often is calmer.

"It's reassuring to have a specialist to walk the parents through the ABCs of newborns," says Yael Powell, co-owner and director of the Charlotte branch of Absolute Best Care, which connected Gilani to her nanny. "I think they really get a lot of value out of it."

And if a night nanny means the difference between two hours or six hours of sleep a night, Gilani votes for the latter. "The nurse was a stabilizing force," she says. "She was like water wings for me."

This article appears in the October 2008 issue of Charlotte magazine.
Categories: Buzz > QC Culture, Feature, The Buzz
Contest of the Month