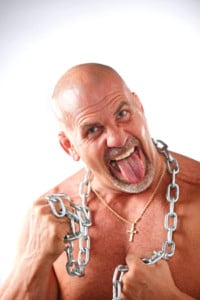 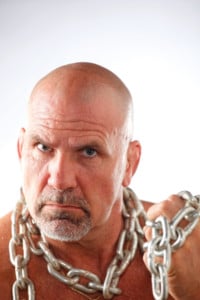 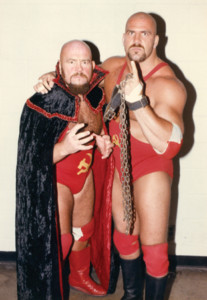 "The idea of two sweaty guys grabbing a hold of each other didn't appeal to me. Let me knock somebody's head off," says Koloff, fifty-one. In 1984, he was awaiting a tryout with a team in the short-lived United States Football League when a pro wrestling friend called with a job opportunity. Aging villain Ivan Koloff was looking for a big guy willing to shave his head and become his Russian nephew.

In Raleigh, a few days after the call, Nikita Koloff stepped into the ring for the first time. Eleven seconds later he won his first match. At the time he weighed 285 pounds and had 8 percent body fat and a thirty-four-inch waist. He dove into the role, legally changing his name (from Nelson Scott Simpson) and learning how to write in Russian and string together Russian phrases.

"For the first several months I didn't speak English other than in the car and in the dressing room," he says. Aligned with Uncle Ivan, Nikita was an instant heel and an in-demand performer. (In 1986 he wrestled in 454 matches.) Anxious to be closer to his wife and three daughters (a fourth was born in 1996) Koloff decided to "bronze the boots" at the age of thirty-three. His last match was in November 1992. A year later his life took another unexpected turn.

"Back then if somebody would have told me that I would travel the world as an ordained minister I would've told them they were smoking crack," laughs the still hulking Koloff, who now favors suits over shiny briefs. His down-to-earth charisma serves him as well on the pulpit as it did in the ring. "I grew up hearing the stories about Jesus. It was an intellectual understanding of who he was, but on that day [in 1993, when he was invited to a church in Concord, where he lives] there was a tug at my heart."

Koloff became as committed to his religion as he was to wrestling. "It's not in my DNA to do anything halfway. … I went on these projects to Africa and Trinidad and helped build buildings and preach the word. I'd later travel to twenty countries."

His celebrity made him a popular speaker, but he may not be as recognizable today as he once was. A quarter of a century after shaving his hair, Koloff started growing it back.

"It's refreshing to go out and eat a meal and not be recognized," he says, adding that it's hard to shake his former persona. "The other day my seventeen-year-old said, ‘You're going to shave your head for my graduation, aren't you?' They like the bald head." So, he's bald again.