INSIDE C3 LAB in South End, a project titled No Vacancy unfolds, but it takes more than just a sentence to describe. The mock-motel constructed inside the multi-purpose space is not simply an installation for visual art and performance to collide. It’s an ever-evolving, interactive environment that asks questions of every artist and attendee invited to touch it. It’s a collaboration between the performance ensemble TAPROOT and Jeff Barninger of Union Shop Studio that won’t stop changing and hosting new artists until Aug. 28, its final day.

The original rooms constructed for the project are each designed by a singular visual artist. To describe the specifics of the motel, designed by Joann Galarza Vega, Micah Cash, Todd Stewart, Katie Lloyd, and Barninger, would ruin the surprise as you walk through. And the rooms are subject to change, anyway, as new artists use and react to the space. (A hint: When you give an artist his or her own room to design without any rules, results vary. Wildly.) Each week, new groups "activate" the space in a different way. During the first week, the motel hosted musicians, such as Erik Button, Dust & Ashes, and Patabamba. During the following weeks, the Charlotte Storytellers led a group through each room, using each backdrop as inspiration and after that, an artists' talk gave the designers a space to explain their process. On Friday (July 1), DJ Matt Conley spins tunes in the space, with a free print for the first 50 attendees from this week's featured artist, Brittany Little. (Tickets run $10 and include beer from sponsor Three Spirits Brewing.) 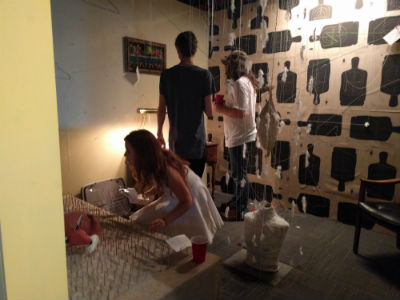 Cash, a visual artist in multiple disciplines, recalls Barninger approaching him with the idea for designing a room in the motel. “He said, ‘I really want you to be a part of it because it’s not something very different for you,’” Cah says. “Being studio-mates, we have a lot of discussion about fostering creativity, stretching your legs, and always pushing yourself. He said, ‘I don’t want new paintings or photographs or anything that you do. But I know you’ll have ideas. This is a safe space, making art for art’s sake. And I want you to have fun.’”

An app, created for iOS and Android, offers another element with a tailored audio experience for each room, created by Transcend Charlotte. While incoming artists may physically change and react to the space, members of the public can also have a say. Comment cards carry suggestions and other notes from visitors. (One, in reaction to a room that functions as a greenhouse, simply asks, “Where are the hemp plants?”) Participants are invited to write on the walls, move items around or sift through furniture. Some of the rooms hint at a self-contained narrative, a story for audiences to piece together. Overall, the result is a dialogue between artist and viewer, and at times, between mediums.

In a video on the project’s Hatchfund page, TAPROOT executive director Brianna Smith explains how this makeshift resort motel also hosts a discussion about the city itself. NoVacancy currently uses the crowdfunding site as a supplement to funding from Historic South End and Knight Foundation, a campaign that extends through July 15. In the video, she says part of the project’s aim is “showing off the diversity of this city, and talking about the way in which it’s changing. As we’re seeing new buildings going up everywhere, letting there be an artistic outlet for us processing all of that.”