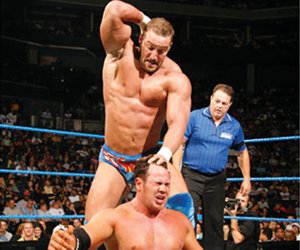 Shanley, whose signature move is known as the Technotronic Boom, has begun making a name for himself on the profesional wrestling circuit.

Some kids dream about being firefighters, lawyers, doctors, or baseball stars. Dan Shanley always wanted to be a superhero.

Shanley grew up in south Charlotte in a neighborhood of wrestlers. Arn Anderson and “Beautiful” Bobby Eaton lived down the street, and the kids around the block looked up to them. “All we did was wrestle,” Shanley says.

He was a county and state wrestling champ in high school, then toured for a year with a band. But the comic book hero inside—the very literal one, complete with overstated muscles and spandex—proved hard to contain.

He did it for the experience, to learn to carry himself in the ring, to work the crowd. But it didn’t pay the bills. “I would do any odd-end job back then,” says Shanley, twenty-nine. “[Wait] tables, a beer truck, a job carrying logs for a tree company, dated rich girls. Whatever it took.”

From there it was developmental schools and then “dark matches”—heading to big showcases like World Wrestling Entertainment’s Raw and hoping to get called for a warm-up match. When it finally came in 2002, he was a tag-team partner with Crash Holly. Shanley was the first person to walk out that night in front of the 15,000 fans. “It was the best rush I’ve ever experienced,” he says. Since then he’s fallen victim to Randy Orton’s RKO, Goldust’s Curtain Call, and John Cena’s FU.

In June, Shanley found himself in the Masterlock, courtesy of Chris “The Masterpiece” Masterson. It was right where he wanted to be. “Of course, I lost,” he says of the four-minute SmackDown match taped at Charlotte Bobcats Arena. But he looked good doing it, and the crowd was on his side. His sights are now set on the November 26 Raw event there.

Shanley incorporates amateur wrestling and tae kwon doe into his style. He’s known for a nasty spin kick and a power slam called the Technotronic Boom. He currently trains with legend George South, frequenting the independent circuit while running his own carpet business.

And he still wants to be a superhero. “I guess wrestling is the only way to do it.”

This article appears in the September 2007 issue of Charlotte magazine.
Categories: Buzz > Sports
Contest of the Month