One on One with Bret Baier 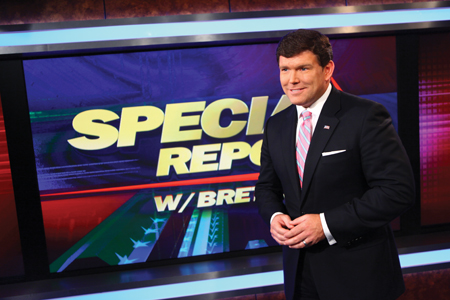 What’s your experience covering political conventions?
In 2008, I anchored from Denver (site of the DNC) and Minneapolis (RNC). There are a lot of things going on, but overall it’s the party’s pitch to lay out the campaign for the fall. It really tells you a lot about where the campaign is heading with its messaging and its ad buys.

Do you expect the scope of the news coverage of the DNC and RNC to differ because one has a sitting president?
No, I think both will be covered pretty extensively. The interest in this election is pretty intense. I think people across the country are starting to come to the realization of how important this election is.

How will this year be different from 2008?
Last time there wasn’t an incumbent and now there is. President Obama will have to defend his record, have to make the case mostly to independents and swing states that he deserves another four years to get the economy back on track. Everybody believes—on both sides of the aisle—that it will come down to the economy.

What will your network try to capture for its viewers?
There are different story lines—the overall theme and the messaging. I also think in each convention there will be elements of discontent within each party. On the Democratic side, I think there are liberals who want to push the president on a number of different issues. Guantanamo Bay is still open, and he’d promised  at the beginning of his administration that he would shut it down. Also his embrace of gay marriage and how that plays in North Carolina.

Providing weeklong news coverage seems like a large undertaking.
There are a lot of logistics that go into this. Our team has already been on the ground numerous times. The setup is extensive, the building out of the set and the different live locations. We’ll have a big presence there, a massive operation if you think of all the things we’re servicing. We have Fox News Channel, Fox Business Network, all of the Fox affiliates, reporters from around the country who operate out of our workspace. Then we have foxnews.com; we have a lot of different elements that are all packaged in, so there are a lot of balls in the air. And making sure none of them drop is the key by the time you get to that week.

What do you know about Charlotte?
My brother lives there. My brother is Tim Baier—he works for News 14, he’s a sports anchor and reporter. I used to work for WRAL-TV in Raleigh about sixteen years ago. I grew up in Atlanta, so in the early days of Atlanta as it was expanding, that’s kind of how I look at Charlotte. I know it’s a different place; it’s a big city with a small-town feel is kind of how I look at it.