One on One with Wolf Blitzer

Wolf Blitzer is anchor of The Situation Room with Wolf Blitzer on CNN. He’ll broadcast live from Charlotte during the DNC —J. H. 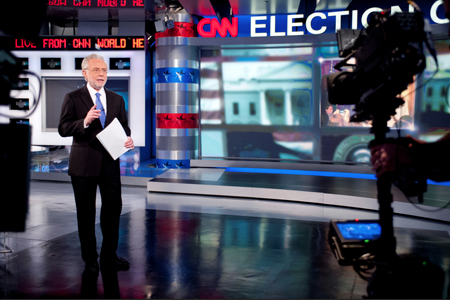 How long have you been covering political conventions?
This is my twenty-third year at CNN. Before that I was a print journalist. The first major convention I covered was in 1980, with Ronald Reagan, and Jimmy Carter was seeking reelection. I’ve been watching these guys for a long time, and it’s been a thrilling front-row seat to history for me.

What about social media’s impact?
In recent years, the social media sites and the blogs have gotten a bigger and bigger role. People are going to get their information in various ways, on their mobile devices. There’s a lot of new technology out there that’s going to change how people watch these conventions. It’s still a work in progress, but I’m thrilled because I think the more access to information, the better off we all are.

Do you think people are going to be more informed or will there just be more clutter for them to have to wade through?
There’s always a lot of clutter, and people who want to be informed will have to be selective. They’ll have to go to the websites and the TV stations they trust and respect.

The presidential debates aren’t until October. Won’t the public have made up their minds by then?
My own sense is that right now maybe 45 to 47 percent of people are definitely going to vote for President Obama, and 45 to 47 percent are definitely going to vote for Mitt Romney. So let’s say there’s about an 8 to 10 percent group of Americans that are either leaning one way but can still be convinced to go the other way or are still legitimately undecided. All those commercials that are out there, all these speeches that these guys are giving, all the stuff their campaigns are doing, and these debates in October, they’re designed to go after that 10 percent of Americans. This is going to be a fierce battle over the next few months, and the Democratic Convention in Charlotte and the Republican Convention the week before in Tampa, Florida, are both going to be significant.

The Democrats selected Charlotte to host their convention, but a lot has happened in North Carolina since that decision. How do you see this all playing out?
I have total confidence that the folks in Charlotte will do an excellent job organizing and putting together a fine convention. The question is can President Obama do what he did four years ago by carrying North Carolina? It’s going to be hard unless he energizes that base of the Democratic Party and gets the vote out. Certainly with the economy in North Carolina, like it is in the rest of the country, there are issues. This is going to be a very close race between President Obama and Mitt Romney. North Carolina is a key battleground state.