Hospital's exec is involved from the ground floor 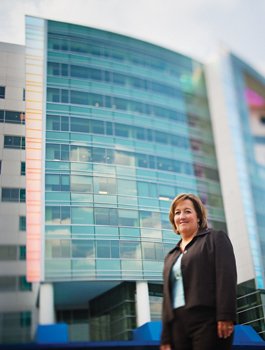 Martha Whitecotton married her high school sweetheart. She was raised by her grandparents in the small town of Amarillo, Texas. She started out as a staff nurse and is now administrator of the new Levine Children’s Hospital.
But her career story isn’t very romantic.

"I wish I could say I played Florence Nightingale as a kid," she says. But it turns out that it was the salary and benefits that made her choose nursing.

Her grandparents were products of the Depression. Her grandfather spent forty years with the same company. When he retired, his pension check came to $15 a month. "I never forgot that," says Whitecotton, forty-nine.

After getting her master's in nursing, she spent eight years back in Amarillo practicing her specialization, intensive care for newborns. That's as good a place as any to learn family-centered care. Parents thanked her for letting them dress or feed their baby.

"You have to create those experiences," she says. "No one knows that child except for you and the family. They are your partners."

Whitecotton joined the Carolinas Medical Center in 1988 as nursing manager and soon climbed the ranks. Since taking over the $60 million-plus hospital, she has sought a staff with "passion for care."

Her passion is evident. She has an anecdote about a child named Jason whom she helped from birth through pediatrics. She can bring up how hard it was traveling 600 miles to Houston when her two-year-old son needed a specialized surgery.

But Whitecotton really comes alive when talking about the myriad decisions and formulations she goes through now. It's hard to follow once she gets going.

"I mean, we're developing a cardiovascular intensive care unit. . . . A new set of environments. . . . New ways of caring for children. . . . Changing a little about the way people experience child care. . . . Political negotiations on the grand scale."

There's a lot on the line. It's a stressful job, and not very romantic.

This article appears in the November 2007 issue of Charlotte magazine.
Categories: Buzz > Power
Contest of the Month