Please stop. All of you. 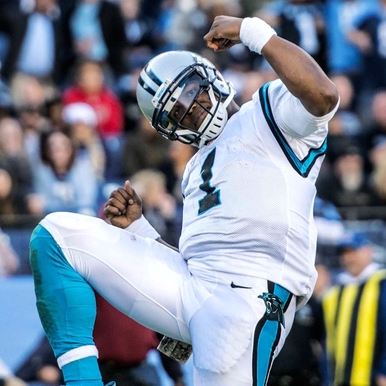 Please stop. All of you. Also, grow up.

You, Tennessee mom. Worried that your nine-year-old daughter will be driven to a life of miscreancy, bad grades, and underachievement because a professional athlete failed to act like a sporting gentleman? Did it not occur to you that you were taking your nine-year-old daughter to an NFL game, not a dressage competition? How much money did you spend on the game, and what else could that have bought? Do you honestly believe your daughter can or would look up to Cam as a role model? What, is she going home and practicing her dab?

You, in Seattle. You’re angry about Cam snatching the “12th Man” flag and “disrespecting it,” as if it was some holy relic? It offended you because the Seahawks do community work? Every NFL team does community work. It’s good marketing and, considering that the average NFL player’s salary is $1.9 million—Russell Wilson makes $21.9 million, by the way; it’s literally the least they can do—not exactly St. Thomas Aquinas taking a vow of poverty. Nice comeback, but you lost. (A slant route? From the one-yard line? In the Super Bowl?)

You, Cam. Great season, sir. You did something I and a lot of people never thought you’d be able to do: Develop some passing touch and become a quarterback instead of a big ol’ single-wing tailback who beats teams with athletic ability all by itself. But the Superman thing is getting old. We get it. You’re ridiculously talented.

You know what? Screw it. You made MVP. Celebrate however you want. If people don’t like it, they can stop you. (Seriously, though, you’d be even better if you quit throwing like a shortstop.)

You, media outlets who run the open letters and knee-jerk stories about them: I mean, y’all do what you need to, but clickbait is clickbait. Don’t try to pass it off as news.

You, Charlotte magazine guy: Aren’t you just as guilty as everyone? Isn’t it just as sanctimonious to criticize someone’s sanctimony as it is for the sanctimonious to sanctimone (not a word, but you know what I mean) to begin with? These are people expressing their opinions, just like you. What makes you special? You’re going to rip on people for writing open letters by writing an open letter? Hypocrite! It’s a free flippin’ country! You grow up!

OK. That’s a fair point. Still, though. You take your nine-year-old daughter to an NFL game and worry that she’s exposed to bad manners? Has this lady never been to a Trump rally?

And you, politicians making silly friendly wagers: Y’all grow up, too.

This article appears in the January 2016 issue of Charlotte magazine.
Categories: The Buzz