All day, Republican leaders in North Carolina, from Governor Pat McCrory on down, have registered their reactions to PayPal’s withdrawal of its plans for an operations center in Charlotte. They’ve made me wonder—I mean this sincerely—if any of them bother to think before they speak, or post, or Tweet.

Look, there’s a way to register disagreement with a corporate decision without coming across as a group of petulant children. Something like this: “While we’re disappointed with PayPal’s decision, and wish the company well, we believe the safety of North Carolina citizens takes precedence over a few hundred jobs, no matter how good those jobs are. We will continue to recruit companies willing to create jobs in this great state in a manner that matches our deepest values.” That would still be nonsensical—it’s based on the false presumption that Charlotte’s LGBT ordinance would have endangered anyone’s safety, and ignores House Bill 2’s many unrelated provisions—but it at least would take matters off the schoolyard.

Instead, we got this from Lieutenant Governor Dan Forest, admittedly the least offensive of the offenders:

And this from McCrory, who once again was incredulous that reporters would dare to ask him about HB2 when he’d gone to his old high school to announce education budget proposals: “I anticipate that PayPal will still provide their services and accept our consumer money in the state of North Carolina,” as if that was the issue. 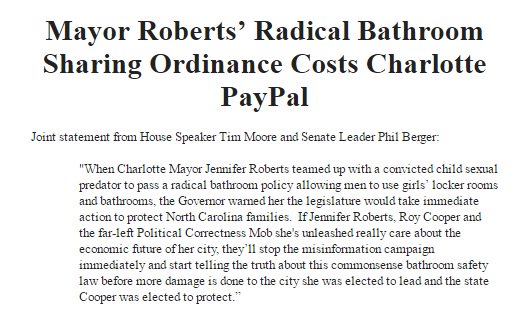 And finally, this Twitter gem (“Hasta la Buh-bye”) from the vice chairman of the North Carolina Republican Party, composed in the Comic Sans font, the digital equivalent of crayon: 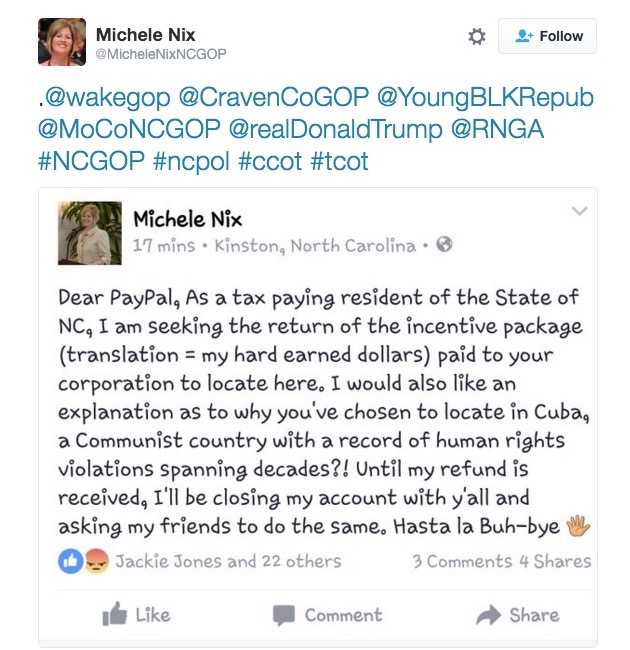 What’s astounding here is the sheer childishness of the responses, akin to the raspberry-blowing fifth-grader’s retort that I didn’t want to be friends with you anyway. McCrory, at least, knows how the economic development game is played; you may not like the rules, and you may not like having to fork over economic incentives, but you do it or lose jobs to Georgia and South Carolina. Calling the executives of a $9.2 billion global corporation a group of unethical hypocrites may scratch a momentary emotional itch, but it neither gets the jobs back nor lures any other global corporations with capital to invest. (And good luck finding a transnational corporation that’s both ethically pristine and hypocrisy-free.)

Why would any of these folks pretend otherwise? What’s the point of insinuating, as Forest did, that PayPal “does not see the worth of our children”? What’s the practical value of portraying the mayor of Charlotte as some sort of pervert pack leader, arm in arm with a pedophile and spearheading the march of the “Political Correctness Mob”?

Why the “that’ll show ’em!” posturing, as if that would show ’em anything but justification for their decision not to come to North Carolina? Do they not understand that actual lives and careers are involved here, that this isn’t some Twitter war where last zinger wins? What the hell is wrong with these people?

This article appears in the April 2016 issue of Charlotte magazine.
Categories: The Buzz