Opinion: Why We Protest

A father of two boys has spent much of the past two years protesting the GOP-led North Carolina General Assembly. So what’s one more round? 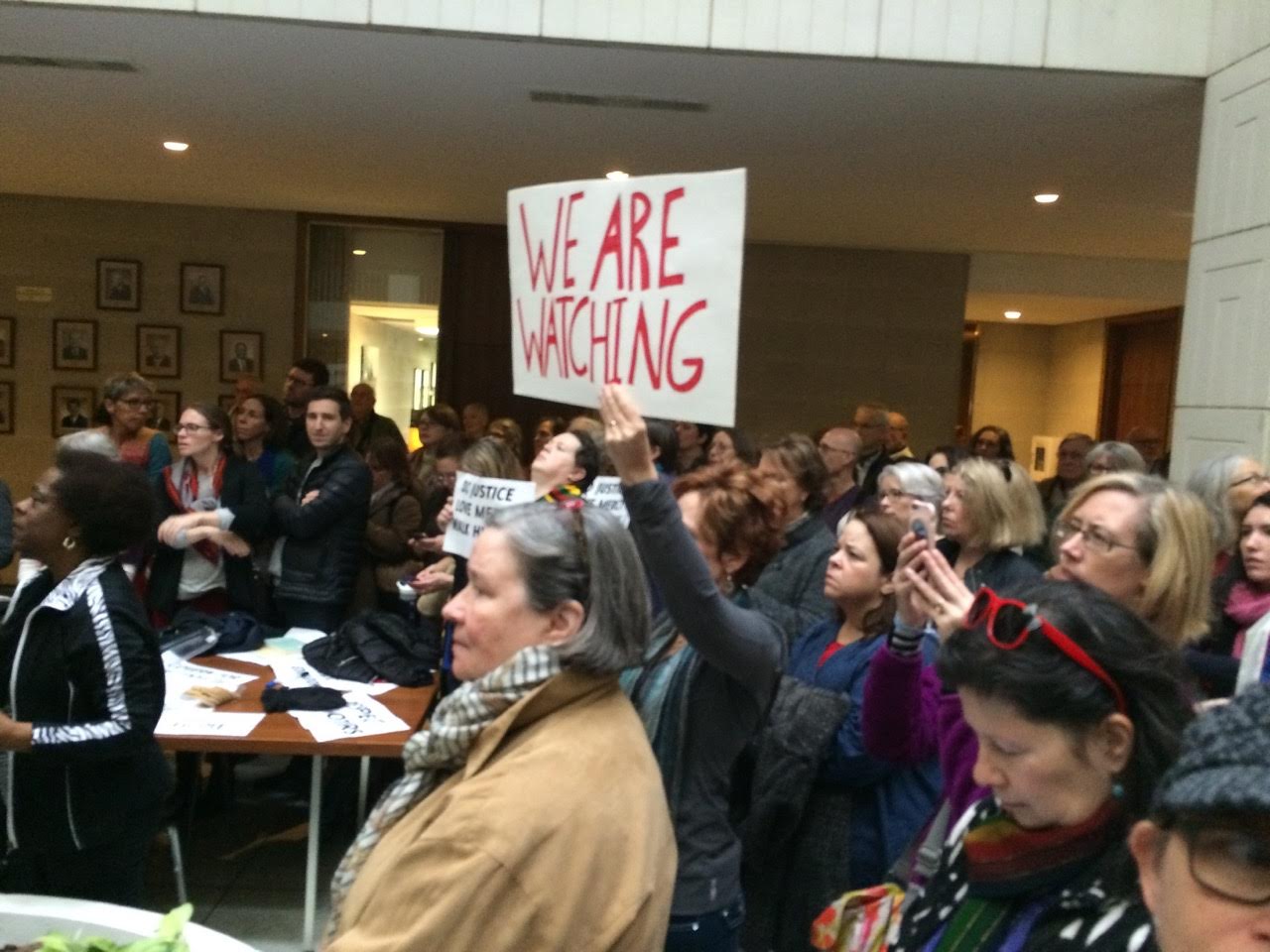 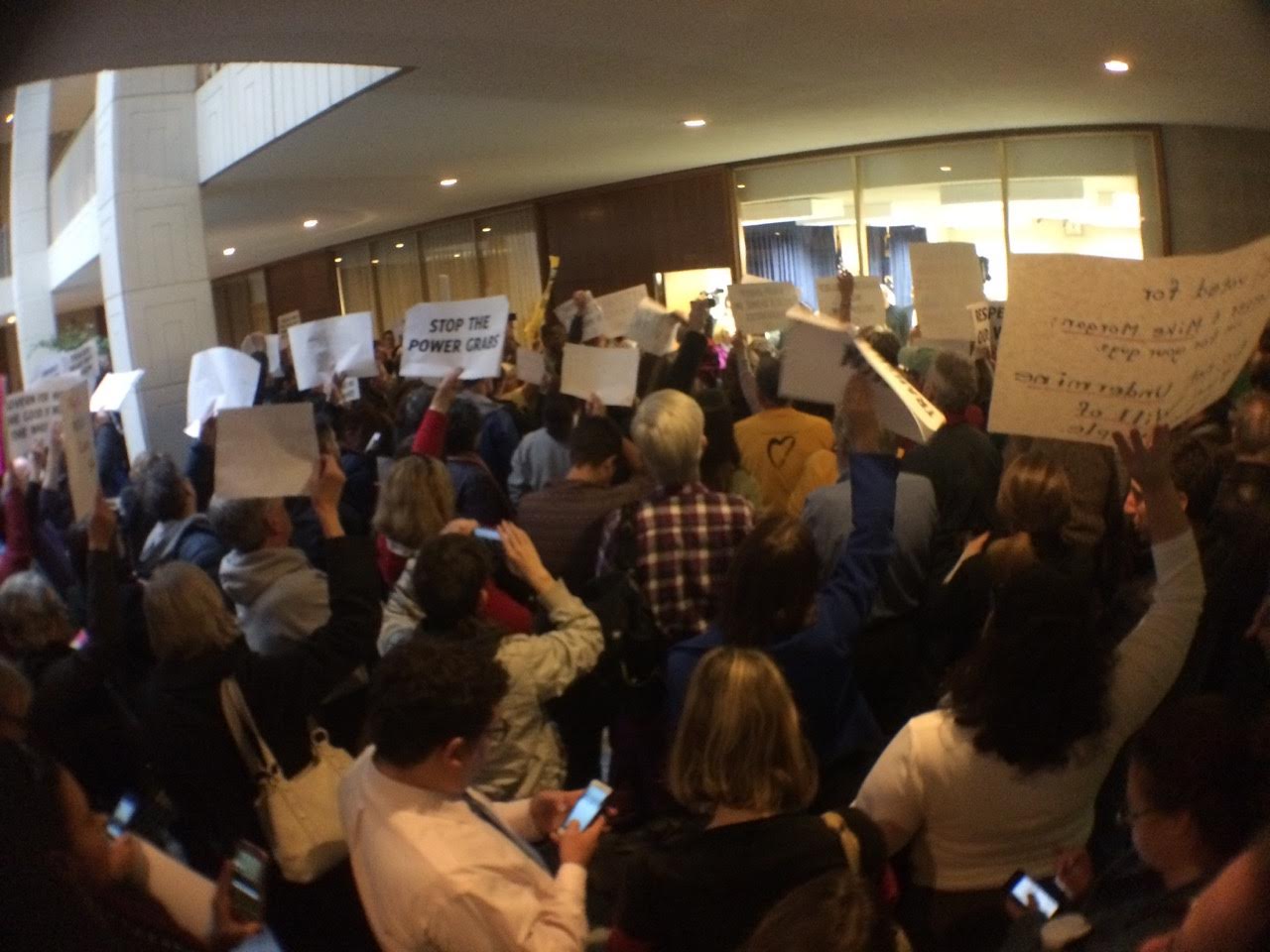 SO WE'RE ALL DOWN protesting at the State Legislature in Raleigh, and it’s the usual scene. We’re crammed into one of the smaller public spaces, waving signs and chanting about democracy and justice and fairness and respect. I meet up, as usual, with people I know from hither and yon—regular protesters, old friends, work buddies. And sure, we talk about the current depredations by the Republican majority staging what is, in essence, a legislative coup. You can get a good list of the specifics here, and here, and here, but you know the story—the wrong party won the governorship and the state Supreme Court, so the legislature, with a veto-proof majority, is basically stripping power from the former and stripping the people’s access to the latter. It’ll go to court, of course, but, well, at this point the details are just too dispiriting. In any case, it’s the kind of stuff that will get a person out to protest.

But once we’re all there, do you know what we really talk about? What comes up again and again? Here is what we say: “I do not have time for this shit.” I am not kidding. This is a real issue for me and for other progressives I know. We have been to so many Moral Mondays over the past few years, so many anti-Klan rallies and women’s rights rallies and HKonJ rallies that, seriously: what with all the saving of the state from tyranny, who has time for anything else?

I’m not kidding one little bit. I am at the legislature because I have an understanding editor and boss, but she can’t be understanding every day. At some point I have to get my work done. I have to keep convincing her I’m an asset to the enterprise—keep making deadlines so she keeps authorizing the pay that keeps my little social justice warriors, my sons, in macaroni and cheese and peanut butter and jelly.

All of us regular protesters discuss this. You want your kids to have their piano lessons and their basketball games and their play time and their time with you, just hanging around, being a family. We all know how important that stuff is. It’s just one cost of the current conservative approach that gets little coverage. We’ve all heard about the business response to HB2—how it’s cost us jobs and investment and attention and respect. But we don’t talk about the fact that while we’re out in the street to protest things like—oh, cripes, a quick look backward brings up … remember the motorcycle vagina bill? My god—we don’t have time to sit down and be citizens.

A party that claims to be pro-business and pro-family certainly has cost the state a lot of business, a lot of economic growth, and a lot of family time.

So you ask—obviously—why I don’t just stop. Why don’t I just quit going down to the protests? Let someone else haul the mail for a while? Just toss the ball with my boys, teach them a new piano tune, fix a gurgling toilet, watch a crappy movie on Netflix? I mean, they’re as sick of it as we are. “Aw, man, do we have to go to the legislature again?” they ask. And yes, I’m sorry, but yes, we do. 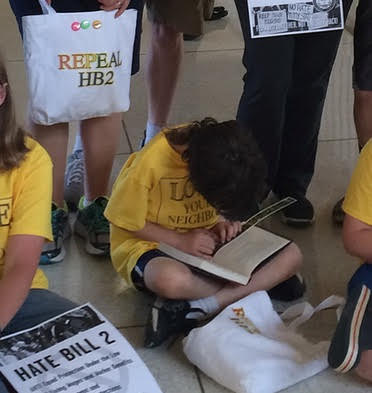 Why? Let me tell you about my favorite picture of Gussie, age 8, our youngest. He is wearing a yellow shirt, made by a friend of mine, that says “Love Your Neighbor: Repeal HB2” (we all had one). He is sitting on the second floor of the General Assembly rotunda, and all around him are people holding signs and chanting. (I think it was “This is what democracy looks like,” but don’t hold me to that.) In the photo, his legs are crossed, and his head is bent down because amid the racket he is reading a Harry Potter book.

But the real reason we keep going is that little boy. That Gussie, reading Harry Potter to keep happy because protest is just part of what you do to save your state, and saving your state is your responsibility as a citizen. That’s the kind of little boy we want to raise. His brother does just the same, mind you, but Louie is 12 now and old enough to follow the protests for their own sake. (“Are things going to get bad for the Jews now?” he asked my wife after the November election. “Not yet,” we told him. “Not first.”)

We want to raise children who are citizens first and know what they owe their community, their state, their nation. Boys who know they have the right to vote and want to make sure everyone has it, not just people of the right skin color or age or wealth status. Boys who know that raising their voices makes a difference and grow up unafraid to raise them—and unafraid to hear other voices raised for causes unfamiliar or discomfiting to them.

There’s something more, though, something selfish. Something defensive—not defensive of the right to vote but defensive against a personal fear.

And I understand: my parents were busy. They were making a life, paying a mortgage, working hard, keeping body and soul together. Getting us to lessons and games and family dinners. Now that we have children I understand—my god, how busy, how complex, how overwhelming. I wonder if they look back? Do they cringe? Do they think of the struggle people were making for basic freedom and wonder how they never marched, never chanted, never carried their bodies to the places of struggle, never showed themselves to power? I wonder, and I know I never want to look back with shame.

I tell my boys often: If we took a million people from human history and lined them up, in order of lucky, you would be number 1. You have two parents and a happy family; enough to eat every day; antibiotics; and you don’t have to be worried about the government grabbing you up and throwing you in prison. Nobody has ever been as lucky as people like you born now—and that comes with a lot of responsibility. For them. For us. For me. For North Carolina and the United States.

When Pat McCrory finally conceded the governor’s race to Roy Cooper last week, I had one of the happiest moments of my life when I told by boys. “You did this,” I said. “You marched and you carried signs and you chanted, and we went down there over and over, and over time 10 thousand votes changed, and that was enough. Your voice made change.” Can you imagine a better thing to tell a child?

Of course this week we see something else. Those in the legislative majority are staging a possibly technically legal coup to wrest power from the new governor before he’s even sworn in, to remove access to the new Supreme Court before it takes the bench. So my boys learn a second lesson: Even when your voice and your vote carry the day, people cling to power. People cheat.

And so the word goes out, on Facebook and by text and Tweet and email: We need you, we need you down at the legislature. We need you to wave a sign and raise your voice.

Aw, man, do we have to go to the legislature again?

Just try and stop us.

Scott Huler is the author of six books of nonfiction and is at work on his seventh, a retracing of the journey of explorer John Lawson through the Carolinas in 1700-1701 (www.lawsontrek.com). He has written for such publications as the New York Times, the Washington Post, ESPN Magazine, and Our State Magazine and was 2011 Piedmont Laureate.  He lives in Raleigh with his wife and their two children.

This article appears in the December 2016 issue of Charlotte magazine.
Categories: The Buzz
Contest of the Month