Our Roads, Our Story: Trade and Tryon Streets

Around lunchtime on New Year’s Eve, horse-drawn carriages wait for customers, and a street preacher bellows gospel into a microphone. At the hot dog stand, a line forms as a crowd streams out of the bank towers. The soft trickle of the water fountains in Polk Park muffles their conversations in Hindi and Spanish and banker jargon.

Here at Trade and Tryon, people walk with purpose. The scene at Charlotte’s central crossroads would be unrecognizable 50 or even 20 years ago. Still, through all of Charlotte’s changes, The Square remains what it has been for more than two centuries—a place to do business.

The Square was a trading hub before Charlotte was Charlotte. Since at least the early 1700s, two Native American paths crossed at a ridge top near good springs. One major path connected with Salisbury and the Great Wagon Road to Pennsylvania. A smaller path led east to Tuckaseegee ford on the Catawba River. By the 1750s, Scots-Irish and German settlers looking for land streamed south from Pennsylvania and Maryland on the Great Wagon Road. One such settler, Thomas Polk, whose great-nephew, James K. Polk, would later become president, built his home at the crossroads. A decade later, after Polk and others laid out a handful of dirt streets and sold lots, there was a scattering of hand-hewn log cabins, a few taverns, and an elevated wooden courthouse that stood in the middle of the square. 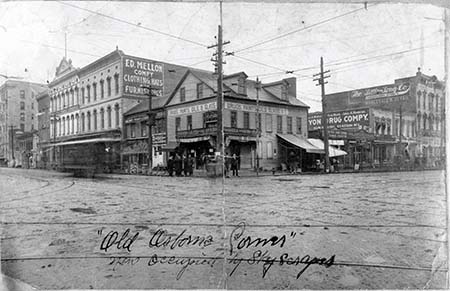 “Old Osborne Corner,” known today as The Square at Trade and Tryon streets, marks the beginning of our city.

Farmers settled disputes at the courthouse and traded goods at the market below, then shared news over whiskey at James Jack’s tavern. It was at The Square where county leaders rebelled against British rule in 1775 and where, five years later, the local people so harassed the occupying forces under Cornwallis that the British had trouble gathering enough supplies to feed their troops. It’s surprising, then, that town leaders decided to keep the name “Tryon” for the town’s main street. British William Tryon, though the royal governor, was well thought of in the area. Decades later, gold miners would cross over The Square and its slowly growing business district on their way to the U.S. Mint at West Trade and Mint streets.

As Charlotte grew during the 1800s, The Square remained the city’s core crossroad of commerce. Through the railroad boom of the 1850s and the growth of the cotton mills in the 1880s, businesses at The Square provided residents with every need. Dressmakers and drugstores, stables and saloons stood tightly packed as horses trotted and crowds walked carefully across the unpaved streets. On Tryon, mansions lined either side of the street just two blocks off The Square.

By the 1890s, the mansions started moving out as electric streetcars made living in suburbs, such as Dilworth, possible. That left room for more shops and businesses. By the 1920s, uptown was home to jewelers and grocers, department stores and shoe shops, movie theaters and recording studios. And banks, of course. The Square began expanding up and out. Charlotte National Bank moved into the International Building, which, at 12 floors, was North Carolina’s first steel-frame skyscraper and the tallest building in North Carolina when it was built. Others followed: Midtown Plaza at 15 floors, then the First National Bank building at 22 stories. Through the next few decades, Trade and Tryon remained a place to window-shop and people watch—the city’s main shopping and entertainment district.

Originally from Surrey, England, William Tryon served as royal governor of North Carolina from 1765-1771. He was known primarily for supporting and trying to implement Britain’s unpopular and controversial Stamp Act, under which Americans were required to pay a tax on newspapers, pamphlets, insurance policies, ship’s papers, and other legal papers.

By the 1970s, though, The Square had lost its luster. Suburban shopping centers with easy parking siphoned shoppers away from the downtown streets. And while the banks remained and prospered, their buildings turned inward as they grew upward. The 40-story North Carolina National Bank Plaza, now Bank of America Plaza, opened on the south side of the square in 1974, followed by the 42-floor First Union Center, now One Wells Fargo Center, down College a decade later. All the while, a series of skywalks ferried office workers from parking garages to office buildings and back, leaving them little reason to touch the sidewalk. The stores that remained moved inside as well, to capture the foot traffic of what became Overstreet Mall. By the late 1980s, the Belk and Woolworth department stores closed. Even the Eckerd drugstore could not survive. The streets around the Square earned a shady and seedy reputation. Trade Street storefronts became dive bars and adult movie theaters. A few blocks to the west, prowlers and prostitutes made nightly rounds. One common phrase in those days captured the juxtaposition of banking power and illicit business that coexisted there: “If you can’t trade on Tryon, try  on Trade.”

Today, The Square has shaken off that reputation through decades of investment and redevelopment. Daytime weekday hours are still the busiest, but nightlife and festivals have returned. More than 10,000 people live uptown now, too. Retail is still sparse. But no one can call The Square deserted.

Later in the afternoon on New Year’s Eve, The Square loosens its tie. Slowly, families on their way to a festival mix with the fast-walking businessmen, the kids stumbling as they stare up at the glass towers. On Tryon, a security guard greets each passerby with “Happy New Year.”

A jogger floats by, weaving his way around blue-shirted bankers and gawking kids.

“Way to go,” the security guard shouts, his white mustache creasing upward in a smile. “Keep up the pace.”

This article appears in the March 2014 issue of Charlotte magazine.