You may not know it, but at this very moment, Wesley Mancini may be in your bedroom. The prolific creator of textiles and home décor accessories is the secret weapon behind many of today’s most sought-after bedding and furniture brands. Like a gifted ghostwriter, Mancini conjures the goods and collects his royalties, while others take the credit. It’s a foible of the trade, but he has no complaints. 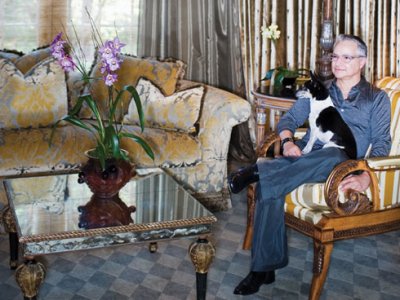 Iconic textile designer and gay rights philanthropist Wesley Mancini may be the most famous designer you’ve never heard of.

You may not know it, but at this very moment, Wesley Mancini may be in your bedroom. The prolific creator of textiles and home décor accessories is the secret weapon behind many of today’s most sought-after bedding and furniture brands. Like a gifted ghostwriter, Mancini conjures the goods and collects his royalties, while others take the credit. It’s a foible of the trade, but he has no complaints.

Mancini greets me in the foyer of his Tryon Street studio. He’s attired in subtle shades of gray (one of the “it” colors of the season, he later informs me) that complement his spare, five-foot-six-inch frame and silver hair. Mancini, fifty-four, apologizes for the lack of furniture as he ushers me inside. “It’s market week at High Point,” he explains.

Mancini’s reputation as a gay-rights activist and champion of the arts in Charlotte precedes him. As we walk and talk, it quickly becomes apparent that he employs the same low-key approach to both his personal and professional causes. Mancini, the consummate host, has a disarming, unconventional demeanor that, combined with the almost courtly manner with which he introduces me to his staff, deferring as each person explains his or her particular expertise, is at once captivating and compelling. It may well be this talent for creating an ensemble spirit of inclusion that has made Mancini such an irresistible force for positive change in the gay and cultural scenes here—although he would never admit it. “I’m always surprised that I’m more well known for philanthropy than design,” he demurs. “I just don’t think of it as a big deal.”

Housed in a building that was originally a mortuary, Mancini’s studio functions as a working museum. In the reception area, an elaborate yet delicate bird cage is home to a pair of playful finches. Antique fabric samples—a liturgical robe, with a wheat-and-grape pattern representing the body and blood of Christ’s Holy Communion; the remnant of a Roman scene depicting a mother boar guarding her piglet from a hungry wolf; a delicate silk panel from the skirt of a Parisian ball gown that might have turned a minuet with Napoleon—are juxtaposed with historical prints and modern art, including a tempting-to-the-touch, caramel-toned wood sculpture by McColl Center artist in residence Anatoly Tsiris (the husband of one of Mancini’s employees).

As we visit the various departments sequestered in the three-story building, it’s clear that from inspiration to final product, fabric design is a painstaking evolution. “Most designers take something, scan it on the computer, put it in, repeat, and presto!” says Mancini. “But that’s about speed. We’re more about quality and retaining the craft.” It’s the attention paid to a thousand intricate details whose subtleties would be lost on an untrained eye—from refining a pattern again and again, as many times as it takes, to the selection of a perfectly harmonious color palette, or just the right yarn texture—that sets Mancini and his staff apart from the crowd of other textile designers.

Perhaps the most impressive part of Mancini’s operation is the archives. “Inspiration can come from anywhere,” he says. To create the hundred designs that make up each season’s line (there are two seasons per year), Mancini and his colleagues have at their fingertips a cornucopia of historic working documents that he’s collected on numerous buying trips to Europe. The designs run the gamut from clean geometric styles and Japanese-themed cherry blossoms to elaborate patterns reminiscent of hand-embroidered tapestry.

With a wide smile, Mancini proudly pulls out a drawer and lifts the leaf of an acid-free folder revealing a fragment of damask from the Napoleonic empire, its bright greens and brilliant magentas still so vibrant, they practically sizzle. On the opposite wall, shelf after shelf of antiquarian books provide further inspiration, while a second set of flat files holds the twenty-five-year compendium of Mancini’s designs.

After completing the tour, we retire to Mancini’s office. Defined by an air of graceful symmetry, the room is immaculate (in contrast to the color department, where the floor is home to a rainbow-hued haystack of fabric swatches). On the credenza next to his desk, the arresting black-and-white photographic portrait of Mancini’s mother and sisters demands acknowledgment. Something in their provocative gaze suggests they have quite a back story, but it is up to Mancini to tell it.

It turns out that Mancini is a Connecticut Yankee in Queen Charlotte’s court, whose Southern gothic tale began in a rural dairy-farming community in the early 1950s. Mancini’s mother, it seems, was slightly ahead of her time. “She was a bit of a social outcast,” he says. “She was divorced from her first husband, who was the father of my two sisters. That was something of a scandal in itself back then. I was illegitimate.” Although she had roots that traced back to the Daughters of the American Revolution, when Mancini’s mom learned she was pregnant, she and her daughters packed what they could fit into two cars and disappeared to Nevada. While there, she had the family homestead sold at auction. After he was born, Mancini’s mother moved everyone back to Connecticut. His parents married briefly, “so I could have a name,” he says, and then divorced.

Growing up in rural Connecticut, the only unusual person Mancini knew was his high school art teacher. “I loved her. She was my role model,” he says. Mancini resolved to follow in her footsteps. His experience of being an uncle and de facto baby sitter to seven nephews and nieces bolstered his decision. “I was great with the kids,” he says, but it turned out that teaching wasn’t for him. Mancini suffers from severe migraines. “When I was teaching, I had headaches all the time.”

Mancini next tried his hand as a fiber artist, but even with a fair amount of recognition and success, it didn’t take long to realize it was no way to make a living, so he set his sights on becoming a designer. His first gig in 1978—“designing really ugly fabric,” he says with a laugh—was more of a learning experience. “It gave me the responsibility for a line of patterns and colors, which was very valuable.”

Three years later, he took a position with Home Fabrics, a division of Collins & Aikman in Concord, where he overhauled the line from highly commercial to a much more decorative look. After one year, Mancini established his own company, Wesley Mancini Ltd., and continued the association with Home Fabrics for another twenty-three years. While designing the Home Fabrics line he designed fabrics for bedding sold under the names of Oscar de la Renta, Alexander Julian, Joseph Abboud, Bill Blass, Jane Seymour, Christopher Lowell, and Kathy Ireland  as well as simultaneously designing an upholstery line for the furniture industry.

Seven years ago, though, under new ownership and management, Home Fabrics eventually went into receivership. Fortunately Mancini’s contract had expired, and he has since forged alliances with three new manufacturers, “who have zillions of clients,” he says. It was the continuation of a successful independent career with a customer roster of private label brands of bedding retailers like Bed, Bath and Beyond, Target, Dillard’s, as well as furniture companies like Henredon, Baker, and Drexel Heritage. With the much-anticipated launch of his own signature collection, the most famous designer you’ve never heard of may soon become a household name.

While Mancini’s name is well on its way to becoming a staple in homes, he’s already well known for supporting a variety of gay/lesbian causes in Charlotte. He believes he can best move his “agenda” (a word he doesn’t particularly care for) forward by being rather than doing. “I want to be a role model for businesspeople who are afraid of being who they are,” he says. “I know stockbrokers, bankers who say, ‘I’m straight at work,’ but the only ones they’re fooling are themselves. They’re afraid that if they are openly gay that they are not going to advance in their careers, that they’ll hit the glass ceiling, and that’s going to be it. That’s still very strong in this city. [I want gay people to know] it’s okay to be who you are. You can still be successful.”

In addition to being openly gay, Mancini is not afraid to pony up money for causes he strongly believes in. One of his first efforts in the Queen City was helping launch the Gay and Lesbian Film Series more than a decade ago. “I donated money toward it, and I put my name on it. No one would put their name on anything,” he says. “They were afraid. But I made it a point that whatever I gave money to, I put my name on.” His next project was organizing the first black-tie gay fundraiser in Charlotte (which benefited the Metrolina AIDS Project).

In 2000, he founded the Wesley Mancini Foundation. “The whole thing got started when Angels in America was in town,” Mancini recalls. “There was that big uproar over the seven-second nude scene. The Arts & Science Council told all the arts organizations that they weren’t going to fund anything that had challenging work in it, and that it was illegal to have nudity onstage. Until recently, any plays in town [with obvious sexual content] had to be rewritten. We got the ACLU involved. It was not against the law to have a nude scene. It was censorship. Since the [Arts & Science Council] weren’t going to support anything having to do with gays or lesbians, and I was doing very well at the time, I started the foundation so that there would be a place where people could come for funding.”

“Having done this work now for over thirty years, one thing is clear to me,” says Steve Umberger, who directed Angels in America, “life and the arts are all about partnerships, and about people being willing to step up and support what they believe in. That’s the only way it works. Wesley has done that. Communities flourish because of people like him.”

Phil Wells, a leader in the local gay community and former member of the Human Rights Campaign Board of Governors, couldn’t agree more. “The most amazing thing about Wesley is that he spends so much of his time—and his own personal money—to help others,” he says. “He could simply sit back and enjoy what he’s achieved in life—like so many others—but instead, he has chosen to use his achievements to support individuals and organizations in this community that need help and support.”

A self-effacing master of ceremonies, Mancini is content to direct from the sidelines and allow others to shine, but it is his impeccable attention to detail that assures a splendid outcome, and his gift for providing a seamless structure on which fine things can be built that ensures the legacy of his good works will endure.

This article appears in the August 2007 issue of Charlotte magazine.
Contest of the Month