Out for Lunch: The Yolk at 7th Street Public Market

PART OF WORKING at Charlotte magazine means keeping up with the city’s restaurant scene. One way we're doing this is launching a new web series called “Out for Lunch.” Once a month, we’ll have lunch at a spot neither of us have been to before, and order a few things that jump off the menu. Then we’ll report back to you with a few thoughts on our meal and leave you with a scorecard.

For our first lunch outing, we visited The Yolk in 7th Street Public Market. It’s a breakfast-focused concept from Greg and Subrina Collier, the husband-and-wife team behind what Charlotte magazine rated the best breakfast in 2018 at since-closed Yolk in Rock Hill. Greg is also executive chef at Loft & Cellar and was recently a nominee for a coveted James Beard Award. 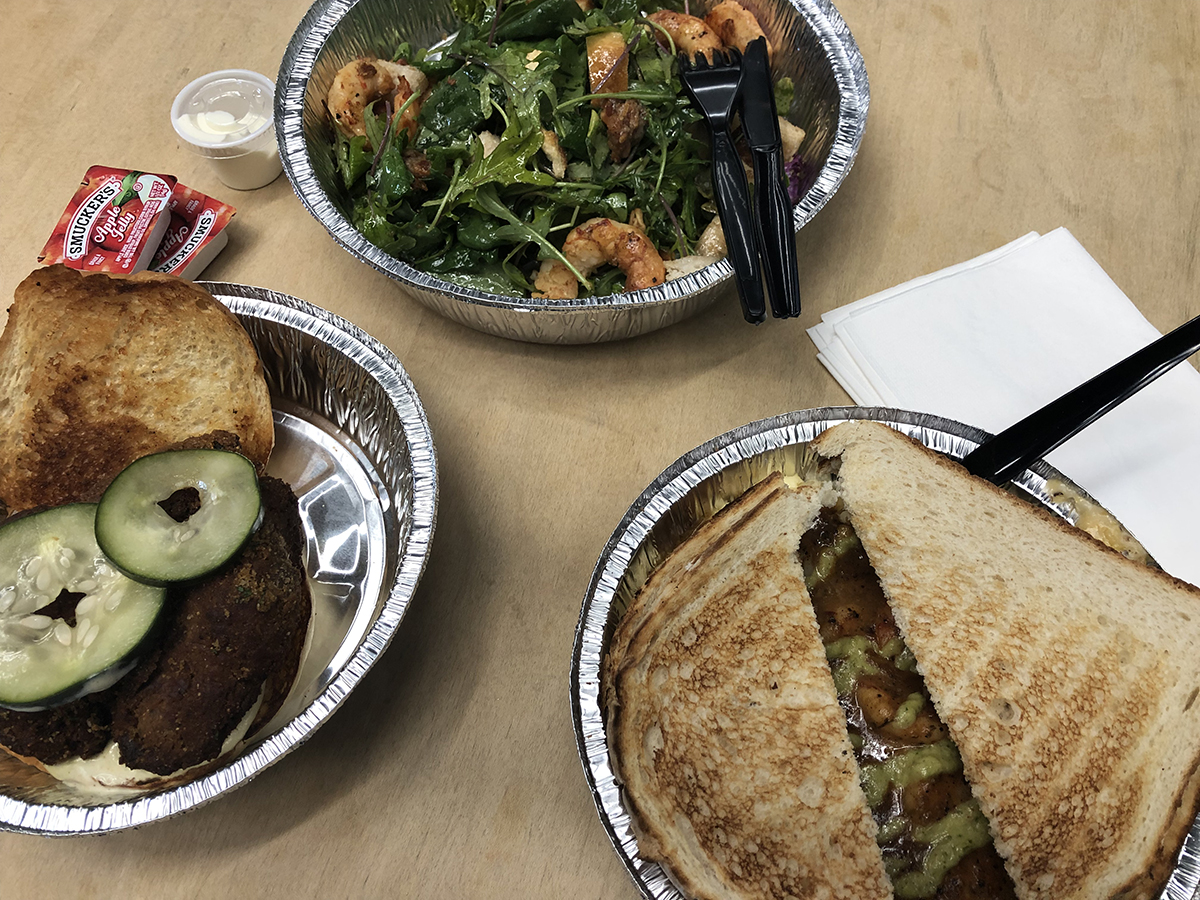 EMMA: I skipped breakfast this morning so I decided to make up for it and order both the Shrimp & Grits ($13) and A Bird in the Hand ($8, add egg for $2). The menu is quite large with 19 all-day options and six lunch only dishes so it was tough to choose. Since it was my first time, I went with a couple of The Yolk’s classic all-day options. 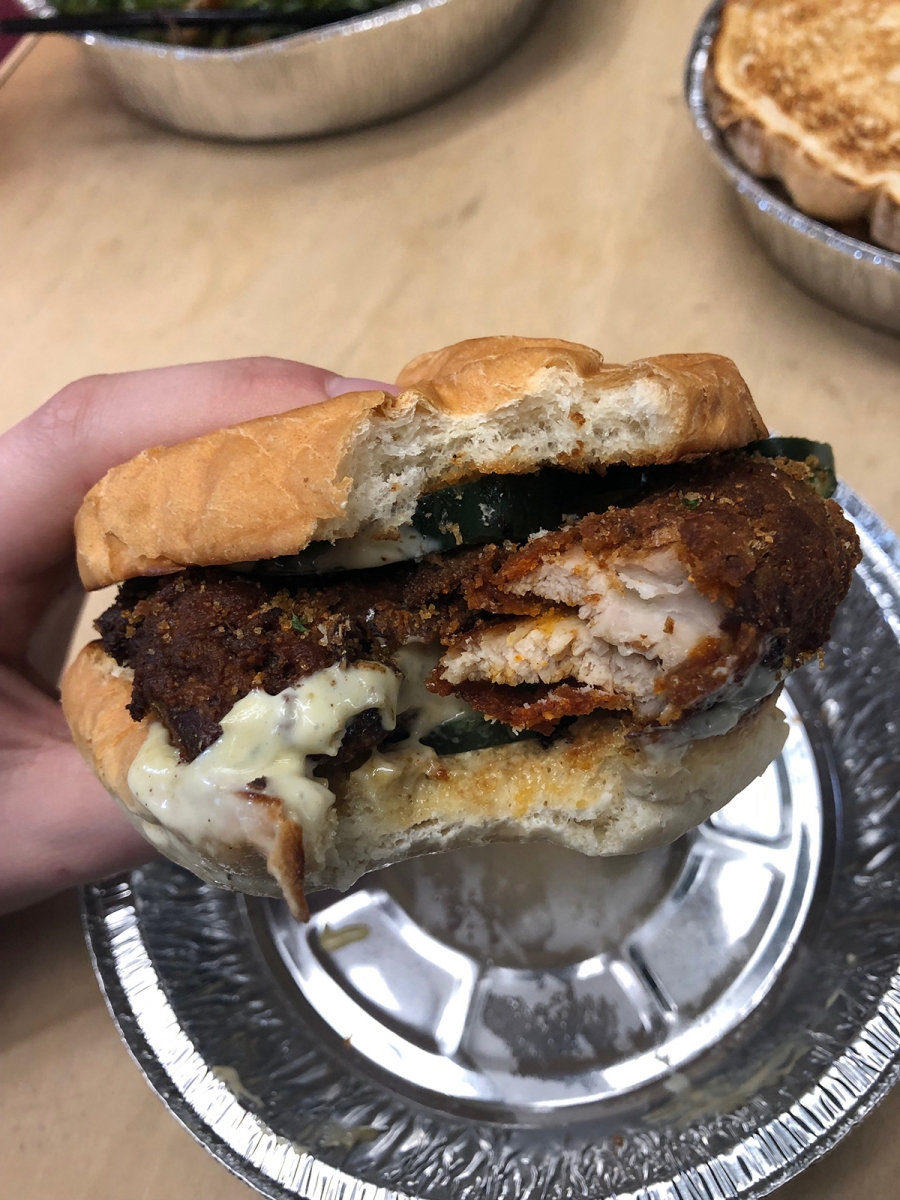 TAYLOR: I did not skip breakfast, so I tried to show some restraint and ordered the Swalty ($11), a bed of mixed greens topped with smoked shrimp, red wine vinaigrette, brioche croutons, and candied bacon. Since it was afternoon, I felt obliged to order off the lunch section of the menu.

E: In a typical bowl of cheesy grits, there’s cheddar cheese and butter and that’s about it. It’s comforting, but one note. Collier’s grits come with Gouda cheese, jerk shrimp, and scallion pesto on top giving the dish more of a smoky, garlicy flavor. So like 15 notes. The shrimp & grits also comes with bread—two slices, halved on top of the dish—but for a plate that’s already pretty carb heavy, this felt like unnecessary.

I ordered my fried chicken sandwich without an egg, which I instantly regretted. The chicken was crispy on the outside and tender on the inside, as it should be, but just a tad salty. The egg would have balanced out the saltiness, I think. That being said, I ate every bite and would order it again.

T: My salad was sweeter than I expected, so the smoked shrimp added some welcomed savory balance. But after tasting Emma’s shrimp & grits, the Swalty isn’t something I’d order again. It’s called “The Yolk” for a reason—breakfast is what they do best.

Ambience – 3/5
Notes – It’s counter service in a food hall environment, so expect lots of movement and lunchtime chatter. For some, the noise might bother you, but for us, it was fun and energizing.

Service – 4/5
Notes – Order at the counter and take a number, then grab a seat at one of the communal tables. Our meals were made to order and delivered to our table in about 10 minutes. But it’s up to you to clear your own table and dispose of any trash.

Notes – Out of the three dishes we sampled, the shrimp & grits was the favorite. The seasoning on the jerk shrimp had hints of nutmeg or cinnamon, which added something unexpected, and the grits were fluffy (not runny) and salted just right. The portions are generous and most breakfast items are pretty hearty, but they’re served in an aluminum to-go container, so grab a lid and take the rest with you if you can’t finish it all in one sitting. 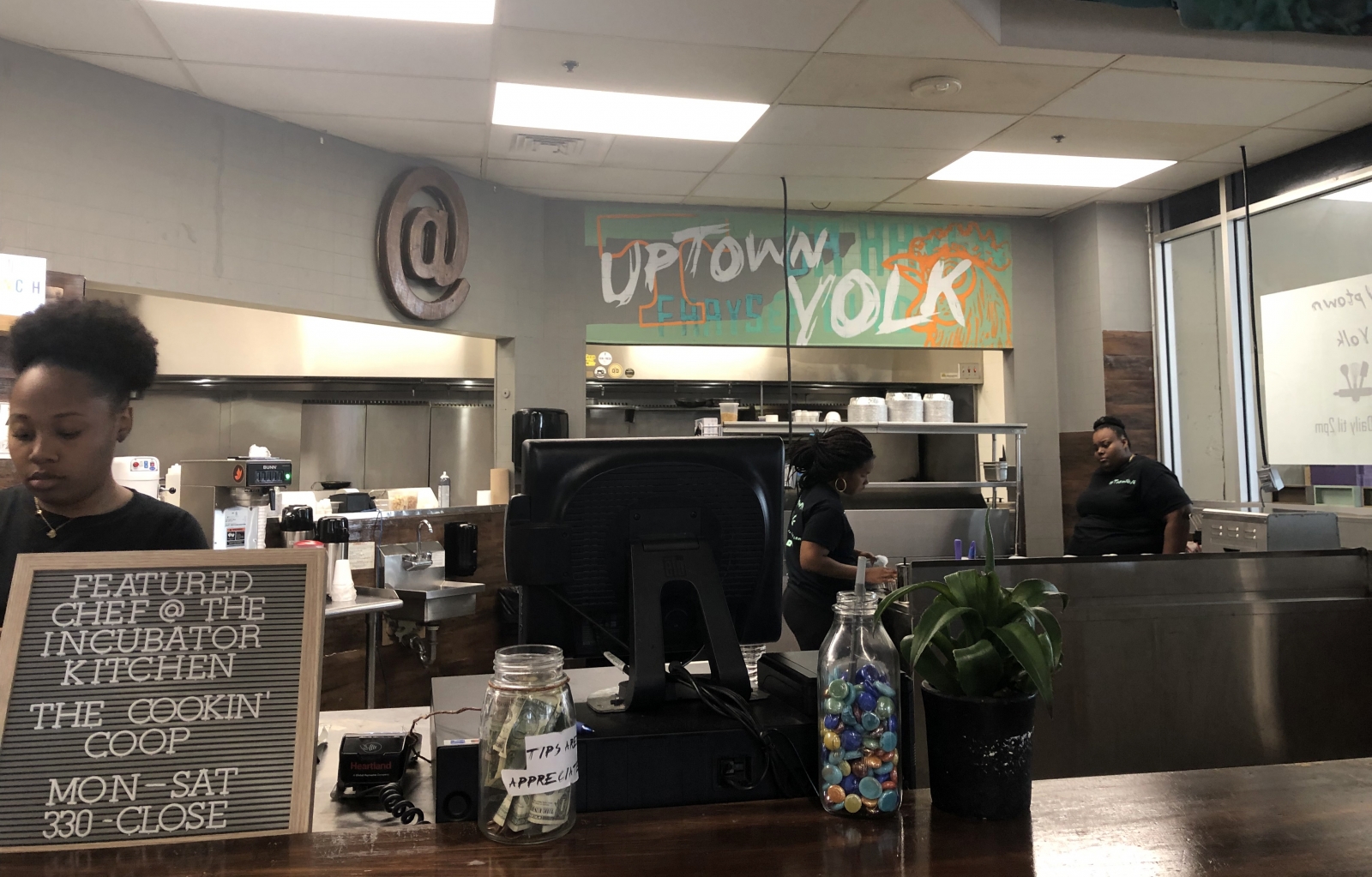