From a 'fast-casual fish camp' to breakfast biscuits

Skrimp Shack
3718 Central Ave A, 980-298-6418
Last year, Charlotte got its first “fast-casual fish camp.” East Charlotte’s recently opened Skrimp Shack location at the intersection of Central Avenue and Eastway Drive, is a welcome addition to the scene. Though its interior may not have the vibe of an old-school camp, entrees like the Skrimp N’ Catfish Po Boy taste just right. —Andy Smith

Snooze A.M. Eatery
2041 South Blvd., Ste. 106, 980-701-9600
The Denver-based breakfast joint opened its second Charlotte location next door to Silverlake Ramen; the first came to Plaza Midwood last year. The menu is lengthy—omelets, breakfast tacos, and pancakes that taste like dessert—but feel free to mix and match if you can’t decide. Order one smashed avocado and one chile verde benedict with toast…or swap it out for a side of hash browns. —Taylor Bowler

STIR
1422 S. Tryon St., Ste. 130, 980-209-0277
The lunch, dinner, and weekend brunch spot with locations in Chattanooga and Raleigh opened another in South End’s RailYard last summer. Get ceviche and local oysters from the raw bar, or order fried green tomatoes and shrimp and grits off the main menu. They take ice pretty seriously, too—a professional ice chef cuts blocks into different shapes for each cocktail. —T.B. 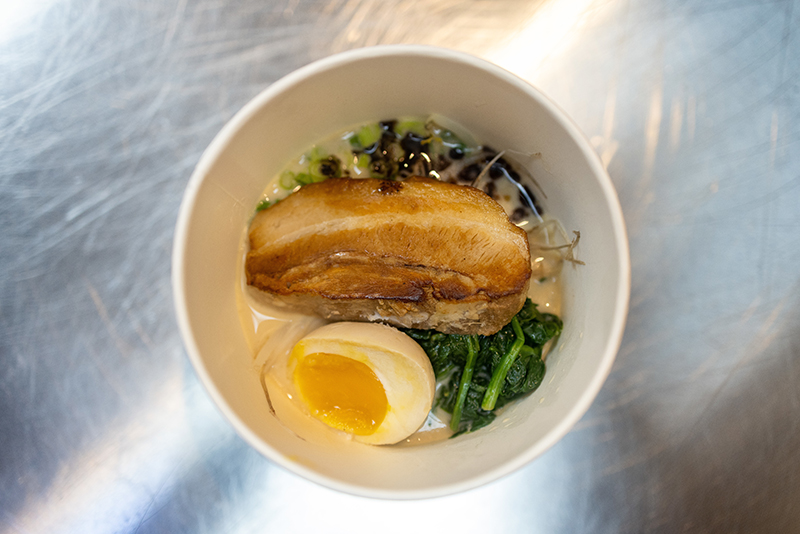 ”The Blaze,” a spicy tonkotsu ramen bowl, is a signature dish at Silverlake Ramen. Photo by Peter Taylor.

Silverlake Ramen
2041 South Blvd., Ste. 107, 980-299-2400
The ramen bowls are the main attraction at the L.A.-based eatery that opened in South End in September. But don’t skip over the appetizers too quickly. The crispy rice topped with spicy tuna, avocado, jalapeño, and eel sauce tastes like sushi and ramen had a love child. —T.B.

Callie’s Hot Little Biscuit
327 W. Tremont Ave., Ste. B, 704-831-8103
Biscuits are to southerners what bagels are to New Yorkers, and this Charleston-based biscuit counter is the real deal. Owner Carrie Morrie uses mom Callie’s recipe for flawless buttermilk biscuits. Order an assortment of flavors like toasted maple, cheese and chive, or iced blueberry, or build your own breakfast sandwich. It’s totally worth standing in line for. —T.B.

The Original Hot Dog Factory
9211 N. Tryon St., Ste. 9
A staggering menu is long enough for you to start thinking about what you’re going to order next time you go to this spot. Just a few of these choices: Detroit Coney, BLT, LA Dog (bacon-wrapped beef dog with chili cheese fries and onions), Jamaican Jerk Chicken, and the Hawaiian with bacon, BBQ sauce, cheese, onions, and pineapple. —A.S.