Parts of Charlotte got all gussied up for the DNC. And once the circus leaves town, we’ll have more than memories —R. T. and L. R. 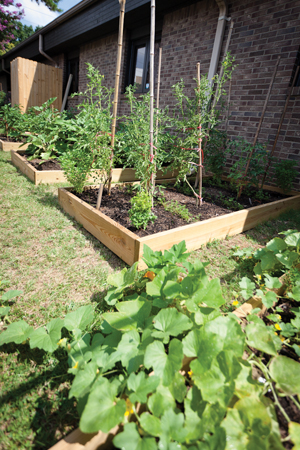 The new community garden, created out of a partnership between the DNC Host Committee and the Charlotte Community
Health Clinic.

Uptown Pocket Park
The honchos at Foundation For The Carolinas just couldn’t stand the eyesore that is their next-door neighbor uptown. So they asked the city if they could turn the vacant lot that used to be the lobby of the old Carolina Theatre—torn down long ago—into a pocket park. The space at North Tryon and Sixth streets will feature green space and sculptures from the FFTC art collection.

Size Matters
Uptown Cabaret, a strip club on the southern edge of uptown, finished a reported $350,000 expansion and renovation earlier this year. This spring and summer, M.A.L. Entertainment spent $150,000 to spruce up its seven area clubs. Draw your own conclusions.

It Takes a Carpenter
In early August, the Arts & Science Council unveiled a sixty-foot-tall sculpture near the main entrance to Charlotte-Douglas International Airport. Ed Carpenter’s piece, which is made of aluminum, steel, and something called dichroic glass, will reflect and disperse natural and artificial light. Proper response when asked about it by visitors: “Oh, that old thing?”

Facelift for the Streets
Plenty of potholes disappeared in time to impress our visitors. As of this spring, roughly 4.2 miles of road inside the I-277 loop had been paved at a cost of $840,000, says Linda Durrett of the Charlotte Department of Transportation. The project was funded by the state, as is most street paving in Charlotte. But don’t call it a convention cleanup. “This was all planned work, and we accelerated the schedule so it would be out of the way before the DNC,” Durrett says.

Bridge Over Troubled … Highway?
It took a few years and a few million bucks, but the Tryon Street bridge from uptown to South End has never looked better. Decorative lampposts, dedicated bike lanes, and wide sidewalks make it (finally!) easy to walk across I-277—just in time for the DNC security perimeter. 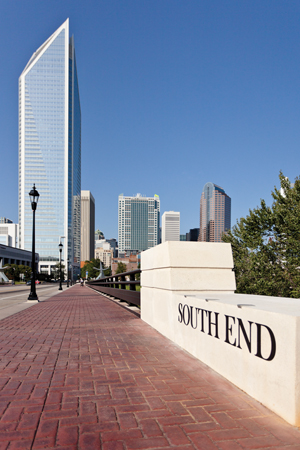 Invasion of the Jumbotrons!
Over the summer, the drive north on College Street became dotted with a few more distractions. Both the Convention Center and EpiCentre unveiled huge high-def video screens perched two stories above the sidewalk.

New Toys for the Police
When the leader of the free world comes to town, it’s Christmas for the cops. The Department of Homeland Security gave city officials $50 million, and so far Charlotte Mecklenburg police have reportedly spent more than $5.3 million. A big chunk of the dough went toward extra insurance, but the cops also renovated their uptown headquarters, bought a new bomb-detecting X-ray machine, spiffed up their helicopter, bought new bikes, and rented Harleys.

Uproar Over Backpacks
In January, the Charlotte City Council passed an “extraordinary events” ordinance. The new rule, which applies to events that attract national attention and large crowds, outraged Occupy activists, the ACLU, and people who carry, um, backpacks. Police can search your backpack, cooler, or carry-on luggage to make sure you’re not carrying it “with the intent to conceal weapons.” They can also arrest you if you’re carrying things like Mace or spray paint. Michael Zytkow of Occupy Charlotte worries the rule “could prevent legitimate people from expressing their grievances.” Heaven help the illegitimate people.

Blue Goes Green
Members of the DNC Host Committee partnered with the Charlotte Community Health Clinic to plant a community garden at the clinic that will help feed the clinic’s patients and teach them about healthy diets. Another nonprofit, Friendship Gardens, will maintain the grounds. The garden helps satisfy one of Mayor Foxx’s so-called “legacy” programs, or initiatives he hopes live on after the convention. The programs cover youth, health, inclusiveness, and sustainability.