Clay Andrews turns his imagination from marketing to a 1920s Plaza Midwood home, proving that creativity is simply a matter of place

Looking at his upstairs loft, Clay Andrews tosses out a quick summary: “It’s like the fifties meets Craft World,” he says with a grin. With a sense of humor right out of a Reynolds Price novel, Andrews is enjoying the Plaza Midwood cottage he reclaimed a decade ago. 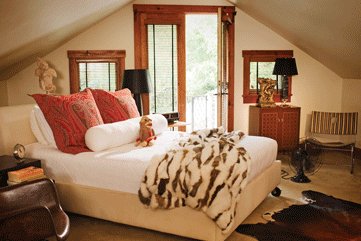 The 1920s home is filled with family heirlooms, eighteenth-century antiques, modern art, and quirky finds. Andrews, who recently began his own creative design firm, Clay Andrews Creative, for residential and commercial projects, brings in what he likes, pedigree or not, to create a comfortable style that is both luxurious and charming. Although he collaborated with professional friends on the interior design, gardens, and architecture, the home still exudes the confidence of one man’s vision. At the breakfast table near the back door, acrylic chairs from a HomeGoods store are paired with a darkly serious, paneled English bench. The table itself is amber colored, marked and scuffed, an old trestle table just right for morning coffee. The effect is cozy and inviting; it’s a setting that has welcomed and entertained many friends.

The home’s personality—a sort of eclectic English cottage style complete with compact gardens, clipped boxwoods, and a pebble parking court—is a dramatic departure from that of Andrews’s previous home. Before this, he was living the mid-century modern lifestyle in Dilworth while working as the creative director of ad agency Luguire George Andrews, which he started in the mid-eighties with two friends. Immersed in creativity at LGA, he liked coming home to the clean form and simplicity of his urban residence. But a fortieth birthday combined with New Year’s resolutions made him ready for a change. The past was tugging on his shirttails, from furniture his parents bought when he was young and “being dragged all over the South” to auctions and galleries, to heirlooms that included a remarkable collection of furniture made by his grandfather. After laboring over new construction possibilities, he snapped up the small brick house just off The Plaza the same day that he saw it. “I’m not usually like that,” he protests, smiling.

On one side of the house, three large rooms would be used for public spaces; on the other side, which was once a separate duplex in leaner times, smaller rooms would be turned into a study and guest rooms. “I quickly figured out there were some things that would work for me,” he says, explaining his quick decision. The upstairs would become a rambling master suite, complete with pine closets built from reclaimed lumber, work station, sitting area, laundry room, bath, and bedroom. He partnered with local architectural firm Laughing Dog Studio to come up with the plans, intending to make only small changes.

“All I was going to do was upfit the upstairs and renovate the kitchen,” he recalls. His plan was short-lived when basic work upstairs led to plaster ceilings collapsing on the first floor. “They’d call me and say, ‘Another ceiling fell,’ ” Andrews remembers, laughing about it now. Doorways turned out to not have headers, the structural piece that bears the weight across the top. Cosmetic decisions uncovered structural problems. What began as a simple renovation stretched into a yearlong project: windows were replaced, new ceilings installed, every door was removed and stripped, the frames reinforced, molding was re-planed, and new wiring and plumbing were installed. “It doubled the time; it doubled the project,” he says.

Andrews saw promise in developing the humble expressions of the home’s Tudor style. “I like Tudor,” he says, “I knew it could be textural—really warm.” He played up those influences by adding interior arches in the classic Tudor style: pointed at top with sides pulled wide. He used antique corbels to support the living room drapery rod and hung a large leaded-glass window over a day bed in a guest room. Aida Saul of Aida Saul Interiors and Luxe on East Boulevard provided interior design services, including the idea for patchwork living room drapes created from fabric samples, reversed during summer months for a lighter feel. Friend and fellow Plaza Midwood resident Bruce Clodfelter, a landscape architect, drew up plans for the gardens.

The landscape may be the home’s most distinctive feature, transforming it from an interesting piece of architecture to something disarmingly sophisticated. Like the setting of a beloved retreat, pots spill with shrubs and trailing plants, bigger ones hold small trees, a pebble parking court gives an air of importance, and a finely detailed backyard yields plenty of eye-satisfying views.

Although Clodfelter drew up the plans, Andrews’s green thumb has sustained and broadened the vision. A bed of perennials edges one side of the pebble court, boasting exotics like tall cardoons, a dramatic thistle related to the artichoke. In front of the house is a row of smartly clipped boxwoods, one of Andrews’s passions. “I’ve got this thing about boxwoods,” he admits, “I love the English boxwoods—I grew up pruning them.”

Pruning is his hobby, and the results are inspiring. A scrolling pyracantha has been clipped and trained in lyrical lines that curl across a painted wooden fence. A nearby gate leads to a hidden allée of patiently trained bonsai trees. They stand on tall cedar pillars that rise out of masses of holly ferns, hemmed in by a wall of Cryptomeria trees. At a corner of the house, a hefty vine of Southern smylax holds tight, draping its shiny green leaves like a shawl across the brick. “It’s a Junior League thing that gets passed around,” Andrews says dryly, partly with pride and partly with a Southern humor that teases tradition.

In back of the house, a quaint garage with salvaged doors has been turned into a tool shed, becoming a focal point for an elevated patio that is a step down from the back deck. A copper shelf is crowded with succulents, Andrews’s latest horticultural interest. The curving green lawn is banked with beds that have plants massed for texture and color—the silvery-purple leaves of Persian shield are a counterpoint to sunny black-eyed Susans. At the rear of the property is a tiny stone patio with wrought iron furniture. An old trolley from a sewing factory has holes drilled in its tray, giving drainage to a crowd of sedums. A partially hidden path leads to a shady cluster of mountain-loving plants such as azaleas.

From the master bedroom on the second floor, Andrews can step out on a balcony to survey this pixie’s Eden. It’s a world that thrives under his care, straining at its borders to contain all he’s packed into it. Like Andrews himself, it’s brimming with ideas and experiments, old things that are being recycled and new ones that are growing old. It may not be mid-century modern, but it’s modern enough. For Andrews, who is now fifty-one, he’s enjoying a mid-century of his own design.

This article appears in the Home & Garden September 2007 issue of Home + Garden.
Contest of the Month