Is this a man's world or what? 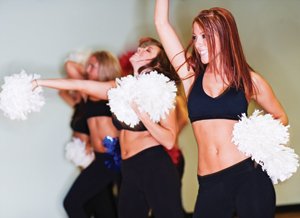 The CheckMates practice at Core Fitness in uptown. They have to keep up their stamina to take on rowdy hockey fans at Charlotte Bobcats Arena. – Chris Edwards

"Totally psyched." That’s how Celia Davis-Thompson feels about cheering as one of the CheckMates, the twenty-woman squad for the Charlotte Checkers, at each of the team's thirty-six home games. This fall marks the start of the CheckMates' third season of hockey cheerleading, a relatively new phenomenon in the rink.

But the CheckMates don't just cheer from rink side. Sometimes to the tune of hip-hop, sometimes to country or rock, these ladies get out on the unforgiving ice and perform a medley of dance routines, all of which require top physical condition in addition to natural rhythm. They wear special-soled shoes to help keep their footing on the ice.

With so many games, two practices a week, scheduled guest appearances, and full-time jobs outside cheering, the CheckMates are busy women. "It’s a challenge, but [dancing] is my sanity, my stress relief," says Lindsey Fagan, one of the few Charlotte natives on the squad, who doubles as a registered nurse at Presbyterian Hospital.

Fagan is also one of ten CheckMates returning from last season, and she's excited to work with the new members. "It’s nice to be with a bunch of girls who I have a lot in common with."

Another returning CheckMate, April Williams, an account executive for Charlotte's 96.1 The Beat, agrees. "The dynamic is great," Williams says. "It really shakes up the team and brings in new personalities. It's nice to have new faces."

The Checkers' season runs from mid-October to early April, and the CheckMates will be on hand to heat up the ice. "Hockey fans are unusual," says Fagan, "but they’re a lot of fun."

Go to "Agenda" page 57 for a list of the Checkers' November home games. Then go see the CheckMates in action.

This article appears in the November 2007 issue of Charlotte magazine.
Categories: Buzz > Sports
Contest of the Month