President Obama Will Stand on a ‘T’ at BofA, Gabrielle Giffords Expected to Attend Convention

The Democratic National Convention Committee welcomed about 400 journalists and media executives from around the state, country, and world for the second and final media walkthrough yesterday. The first media walkthrough for the Democratic National Convention, which the purpose of these is to provide media with technical and logistical information to help in their planning for convention coverage, was held in January. This one was similar, but with more details finalized. Approximately 15,000 members of the media are expected in Charlotte for the convention in September.

Media were given tours yesterday of Time Warner Cable Arena, where official proceedings with delegates and Democratic Party speakers will take place Tuesday and Wednesday, September 4 and 5; of Bank of America Stadium, where the public will be invited to see President Barack Obama accept the nomination on Thursday, September 6; of Charlotte Convention Center, where media workspace has been assigned and caucus meetings will be held; and of Charlotte Motor Speedway, where the Charlotte in 2012 Convention Host Committee will hold CarolinaFest on Labor Day Monday, September 3, a free and open-to-the-public family-friendly festival. I believe yesterday was the first time the name of this festival was revealed, since plans for it were first announced in January.

I attended the winter media walkthrough, but decided for this one I would be one of the small group of journalists who signed up to cover the event, meaning we were given brief looks at the proceedings rather than participating in them. Not much newsworthy happens either way, because the event is for planning purposes, but DNC officials did reveal the location of the stage where President Obama will stand when he accepts the nomination at Bank of America Stadium. The stage will be along the 50-yard line, in the shape of a capital T, with the podium at the bottom of the T. 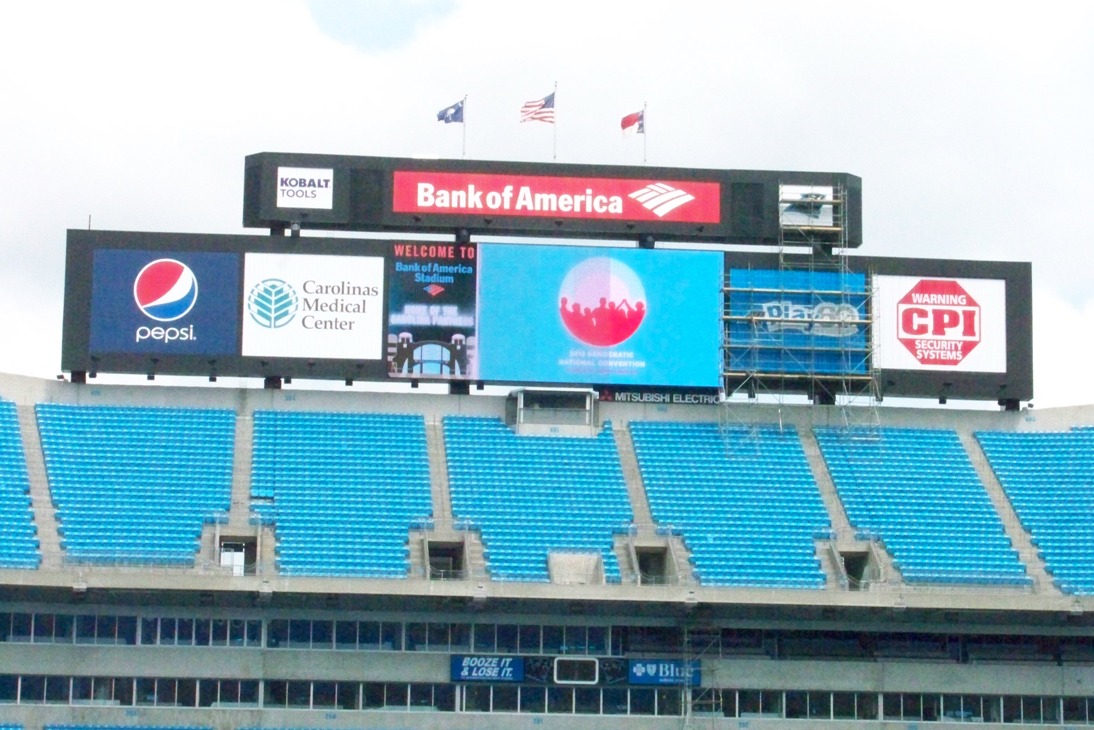 Standing in the empty stadium, looking out onto the field and around at all of the seats and signage, I couldn’t help but wonder if the red Bank of America sign on the large video screen at the top of the stadium, which would be visible from where the president will stand, if it will temporarily be removed or covered up for the nationally televised September event. If I was a betting man, I’d say it will, though I have no evidence to support this. DNC officials can’t help the fact that the stadium, which is owned by the Carolina Panthers, has naming rights of one of the country’s largest banks, which once again made headlines this week (“Merrill Losses Were Withheld Before Bank of America Deal”—The New York Times), as the never-ending fallout from the financial crises of 2008/2009 continues.

One of the main reasons I signed up to cover yesterday’s walkthrough was because the DNCC Press Office said it would offer a media availability with Democratic National Committee Chair Debbie Wasserman Schultz after she spoke to the larger crowd of media from the floor of the arena. A group of us journalists gathered in one of the restaurants inside the arena, where Wasserman Schultz took questions from a podium. I expected this presser would be brief, but I didn’t think it would be three-and-a-half-minutes-brief. As the press office gave the wrap call, and Wasserman Schultz began to step away, Jim Morrill, political reporter for The Charlotte Observer, asked: “Madam Chairman, is your friend Gabby Giffords going to have a role at the convention?” To which she replied: “I expect that she will. In fact I’m going to see her in D.C. this afternoon. And I’m sure we’ll probably talk about that. We’ve already talked about it. I think she’d like very much to go.”

Thankfully, news you (and I) can use (and captured on video below).