When Charlotte was battling to land the NASCAR Hall of Fame, boosters paraded the slogan, "Racing was built here. Racing belongs here." And many of the people who cover the sport call the area home, too. Shannon Spake, a Fort Lauderdale native who lives in Cornelius, is a reporter for ESPN’s NASCAR Now and NASCAR Countdown. 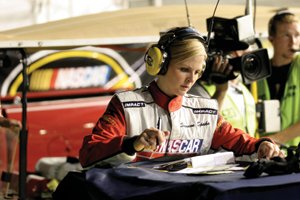 Shannon Spake, a Fort Lauderdale native who lives in Cornelius, is a reporter for ESPN's NASCAR Now and NASCAR Countdown. – Courtesy of ESPN

Are your segments taped locally?
Almost all of my stuff is done locally. I’m going to shops during the week. I'm meeting with crew chiefs, meeting with teams, drivers. Talking to a team the day after their win at their shop here in Charlotte. I love it. There’s nothing else I'd rather be doing.

Is there any camaraderie amongst you and the other analysts?
We're a family. It’s a thirty-six-week season and we're on the road together every weekend…you really turn to the people around you.

What do you do in your free time?
I just took up dirt biking.

So we may see you in the next X Games?
No, no, nothing like that [laughs]. I can, like, take a corner. Jamie Little, who's the other woman who covers ESPN NASCAR, covered the X Games for a long time, and she has a dirt bike. So when she comes here in October for the race, we're definitely going to go out.

Other members of ESPN's NASCAR team

This article appears in the September 2007 issue of Charlotte magazine.
Categories: Buzz > Sports
Contest of the Month