Sometime late Wednesday night, the fans of two college football teams and their bands stood in the EpiCentre, playing songs against each other. Back and forth, each school took a turn touting fight songs and bellowing chants. A “Let’s go, Hokies!” would break out, followed by a chilling “calling of the Hogs” from Arkansas’ side. After about five songs from each team, though, one final number rang out. It was coming from the Hokies’ side, and it was a version of Metallica’s “Enter Sandman.” Virginia Tech’s players have been sprinting into their home stadium to this song before games for years, and on this night, it was the beginning of the end of this battle for our city’s shiny center along College Street.

Charlotte, just two hours down Interstate 77 from VT’s campus, is home to the largest Hokies’ alumni chapter outside of the Commonwealth of Virginia, with 3,800 members. And here, in the big buildup to the Belk Bowl, the fans began to jump on all three levels of the Epicentre. With each note, the Arkansas band quietly disappeared from the staircase, and the night closed out with kids and rivals alike dancing to the DJ.

It was a premonition, of sorts, for the next day’s game. Charlotte’s hosted a college football bowl game since 2002, and in 2011, that game became known as the Belk Bowl, featuring one team from the ACC and one from the SEC. This year’s version was as wild as any in the past, with Virginia Tech coming back from a 24-0 deficit on a windy Thursday night.

But to a Charlotte resident like me—I’m not an alum of either school—the game was secondary to the festivities and the heavy metal.

And, of course, the country. 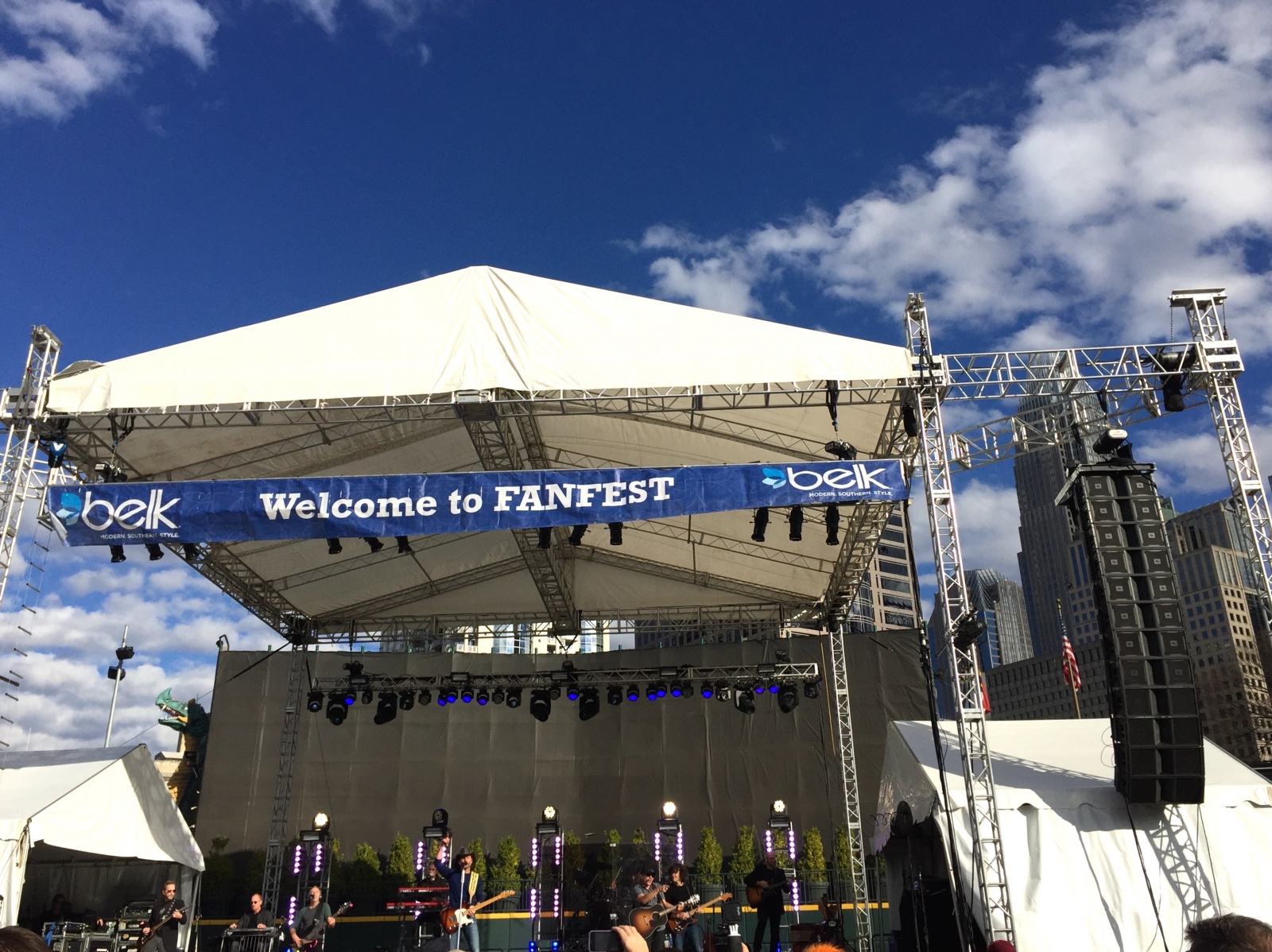 Tim McGraw played some old favorites as well as new hits for fans before the Belk Bowl kickoff.

In the hours before the game, BB&T Ballpark attracted a decent crowd of both Hokies and Razorbacks. Why? Because Tim McGraw was playing. The forecast had called for rain, but the country music legend played under sunny skies and in 55-degree weather—a beautiful atmosphere to pregame the Belk Bowl tailgate happening just a couple blocks away. Everything went smoothly in uptown Charlotte, and we were all thankful the rain stayed away despite the occasional bursts of wind.

As fans moseyed by food trucks and street performers around the Bank of America Stadium, maroon and orange once again filled the atmosphere. The Hokies were not lacking in spirit or in numbers, so when they flopped in the first half, it was a wildly underwhelming game to watch.

That is, until the second half began.

Some might call it a series of miracles or just some old-fashioned tenacity, but the Hokies scored a touchdown. Then another. Then another. Then another. They scored 28 points by the early fourth quarter to threaten the Razorbacks’ 24. VT fans who left early must’ve been kicking themselves but continued to watch from wherever they were—whether at an uptown apartment or south end station bars. It was a hell of a game, after all.

I grew up going to professional football games. My parents are Tampa Bay Buccaneers season ticket holders, and there wasn’t a Sunday in our house that didn’t revolve around game time. Just like most everyone else, I love a good underdog story. And as I watched the Hokies and Razorbacks battle it out from an endzone seat, I couldn’t help but share in the emotions of the Hokies next to me as the game went from hopeless to hopeful. 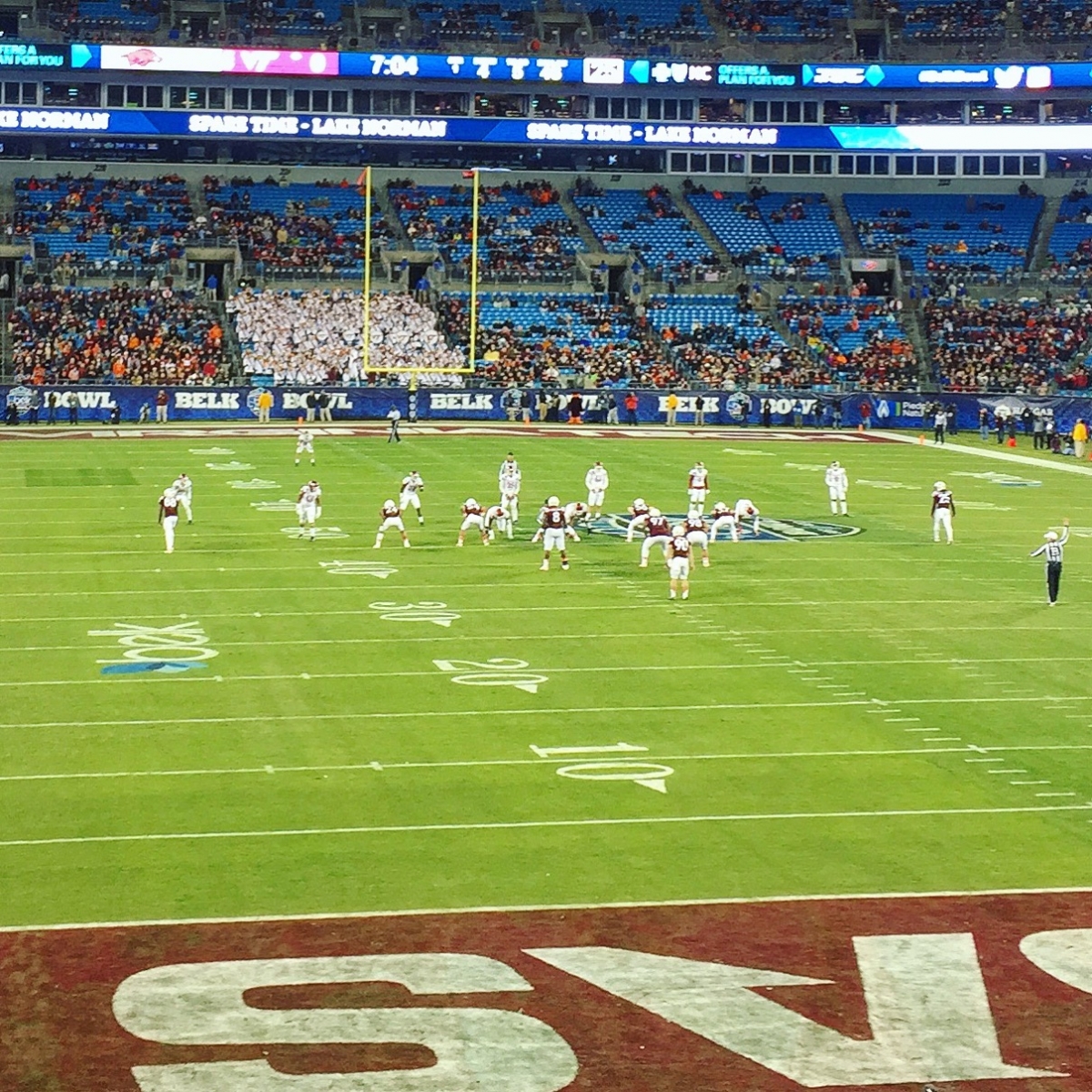 Especially when the revival continued. The Hokies put up another seven points to close out the game with a 35-24 win. The seesaw aspect of this game reminded me a lot of my lifetime as a Buccaneers fan, cherishing the highs and trudging through the lows. The VT fans who stayed celebrated, and the VT fans who left celebrated. A couple light beers and a Bojangles box later, and my underdog-loving spirit was satisfied, too.

As the Hokies left the stadium with resounding chants and screams of excitement, the aftershock left the Queen City buzzing. The 2016 Belk Bowl proved to be an entertaining one: football, country music, and all.

This article appears in the January 2017 issue of Charlotte magazine.
Categories: The Buzz
Contest of the Month