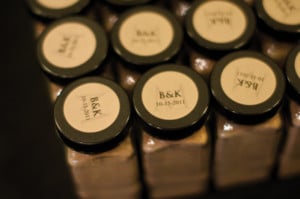 Brandon and Kseniya mixed up gourmet seafood spice as a homemade favor for their wedding guests. 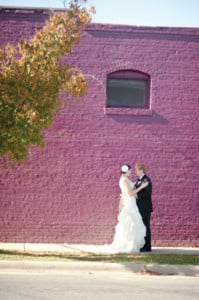 Brandon and Kseniya shared a first look in NoDa before the ceremony. 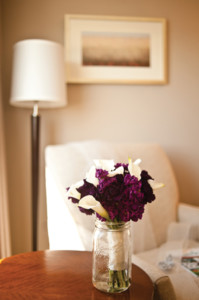 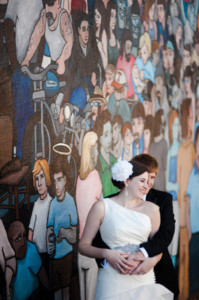 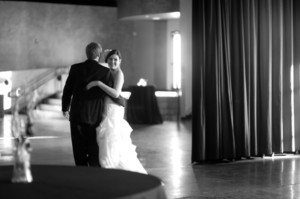 Kseniya’s favorite moment was walking back down the aisle with her brand new husband. 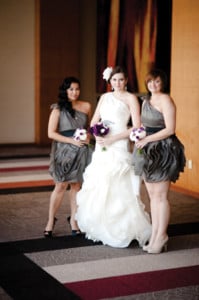 The bridal party started the day at the Westin uptown with hair and makeup by Elizabeth Tolley. Kseniya loved her bridesmaids’ smoky Vera Wang dresses so much, she changed into an ivory version later in the evening for dancing. 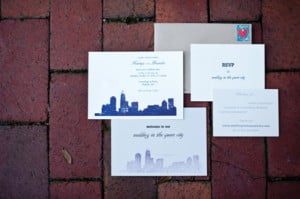 The bride created the “Wedding in the Queen City” stamp for the wedding invitations, in her colors of purple, grey, and lemon yellow. 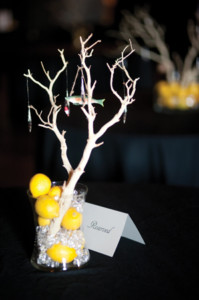 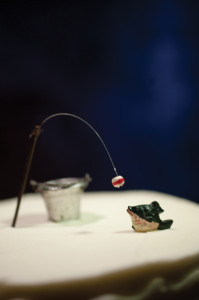 Their tongue-in-cheek cake topper, a little glass fish being reeled in by a tiny fishing pole. 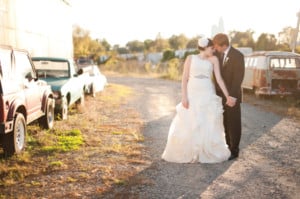 This spirited bride and groom designed a memorable and beautiful wedding in their favorite city, incorporating a wealth of creativity.

Brandon Martin and Kseniya Yakovleva met during their last semester at UNC-Charlotte—in golf class, Kseniya shanked a shot and hit Brandon with a ball. Brandon likes to say the whole thing was a ploy to get his attention. It worked.

After their engagement, the first step for this fun-loving couple was choosing the location for their ceremony and reception. CenterStage @ NoDa provided a clean slate and endless options for customization—perfect for the creative duo.

Self-professed marketing and branding junkies, their wedding quickly became their favorite project. For the invitations to the “Wedding in the Queen City,” Kseniya created a stamp of the Charlotte skyline in her wedding colors: purple, grey, and lemon yellow.

The theme? “Glamping,” which is short for glamorous camping. He’s outdoorsy and likes to camp and fish. She’s a city girl. Meeting in the middle, they paired outdoorsy details with shine and sparkle, such as a chandelier in a tent. Centerpieces were branches festooned with woodsy ornaments.

Instead of a cake topper on their Cheesecake Etc. vanilla and red velvet cake, Brandon added a tiny fish and a bucket. Kseniya is half Jewish, and Brandon built their own chuppah out of wood from their backyard, which he cut with a chain saw and adorned with tiny silver lanterns and white silk.

The other nod to her heritage was the traditional chair dance, or hora, a terrifying and exhilarating experience that became their favorite wedding memory.