As a New England native, moving home after eight years in the South means culture shock all over again 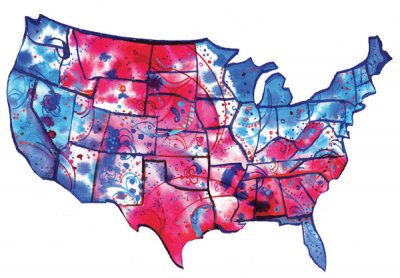 Winter is finally over in Massachusetts. Never mind those ten inches of icy, crusty snow outside my door. The state's natives observe the change of seasons at the end of February, when the Red Sox play their first spring training game in Fort Myers, Florida. I have to admire the uncompromising attitude of the locals here — both their loyalty to a team and their refusal to accept reality as it is handed down to them.

When I lived in Charlotte, I was used to more obvious reminders of spring, like daffodils, patio brunches, and the imminent need for pedicures. The quirks of the local calendar were hardly the greatest adjustment since moving back to New England last August. Airdrop into Massachusetts and you might easily conclude you had landed in another country. But had I left the "real America" for the "fake America," or was it the other way around?

The answer is neither — but maybe not for the reasons you would expect. Put away your stereotypes of good ol' boys driving pickup trucks and televangelists with perfect hair. While my new hometown is more liberal, I am beginning to suspect that Charlotte is actually the more tolerant and diverse of the two places.

Yes, we have universal healthcare in Massachusetts. Marijuana is practically legal. Gay marriage actually is. Not only that, but it's a nonissue. For real. The big conservative ballot initiative last fall (which failed to pass, incidentally) was about abolishing the state income tax.

Born and raised in New England, I came back last summer for two reasons — family and health insurance. Massachusetts is one of the few places in the country where people with a preexisting condition can purchase health insurance even if they are self-employed. I love working for myself, so this was the obvious choice.

But still, I admit it. I miss Charlotte. I still follow Charlotte news attentively and stay in close touch with friends and colleagues from the Carolinas. When I talk with my Charlotte friends, they usually start by asking me about the weather. Could they be afraid of what other stories I might share from the land of godless liberals? Do we plot the implementation of One World Government with our cronies from the Obama administration? Dance in pagan circles by moonlight?

Actually, if Facebook is a reliable guide, most pagan dancing happens in the mountains around Asheville. I can only report that my small town contains a disproportionate number of bookstores for its population. We take a fierce pride in our local eggs, dairy, vegetables, maple syrup, and beer. Soon after I moved here, local farms and restaurants hosted a free harvest dinner on the town green for more than 700 people. That's radicalism, rural New England style.

As soon as I got my new license plates, I realized I was living in the middle of a political and cultural paradox. "Massachusetts: The Spirit of America" is the slogan. The Pilgrims landed at Plymouth Rock. Millions of tourists visit Boston every year to walk the Freedom Trail. Yet somehow "Massachusetts liberal" has become one of the worst slurs that can be heard on broadcast television.

Meanwhile, North Carolina is "the real America" — according to a Sarah Palin speech last October. Then again, North Carolina voters did not repay that compliment with Electoral College seats for her party.

Last fall, I would drive half an hour to watch the presidential debates at the Paradise City Tavern, the local Democratic Party hangout in Northampton. It felt exactly like watching a Panthers game at Picasso's or The Graduate. Every time our candidate made a good point, the crowd would roar approval. Every time the other candidate said anything, or if the ref (excuse me, "the moderator") intervened, they got booed. (Sorry about that, Senator McCain, but you didn't even bother to campaign in Massachusetts.)

In late February I made my way back to the same bar to watch Obama's first address to Congress. I asked the regulars whether they thought Massachusetts's liberal reputation was deserved. By and large, their answer was no. Working-class voters may not agree with the Kennedy family on most issues, one woman told me, but they vote for them out of loyalty — plus, they just don't trust Republicans.
Go back forty years or so and that would be the definition of a Yellow Dog Democrat in the South. The "Solid South" was once solidly Democratic — hard to believe, but perhaps not quite so hard as it was six months earlier. The only safe assumption to make about politics is that the game keeps changing. In the long run, culture matters more than ideology.

Since I left Charlotte, the nation has experienced a devastating economic crisis and a pivotal presidential election. I don't know that I am qualified to make comparisons or comment on the city I left behind — so much has shifted, so rapidly. The stories that dominated the headlines during my first years in the city (the arena referendum, the end of public school busing) are remnants of a bygone era.

But I can tell you that Mecklenburg County did not turn "blue" overnight — in 2004, Kerry won the county by a narrow margin. Nor are damned Yankees like myself the only ones responsible for this transformation. I think of the retired couple at my Charlotte church who worked tirelessly for decades on causes such as affordable housing and passing a living wage — all while ministering directly to people whose lives were touched by poverty. And I remember the young couple who helped to throw an Election Night party in my old neighborhood. Both were from small towns in Eastern North Carolina. The husband was a former high school football hero with a winning smile. The wife had honey blonde hair and a well-earned reputation as a gracious hostess. Naturally, every detail of the party was perfect, right down to the red-white-and-blue streamers and straw party hats — except that we were all Democrats and that year George W. Bush got reelected.

One conversation from the next day stands out just as much. My home was still under warranty, and the builder came over to fix a leak in the kitchen sink. After the job was done, we got to talking. He had seen the yard sign in my front lawn and, as a Republican, he was curious about why I had chosen my candidate. We talked for a while about faith and morality, what these values meant and how they translated into political action. I don't think either of us convinced the other person, but perhaps we gained a little more respect for the other's point of view.

That was not an unusual conversation — for Charlotte. Civility may be the city's most underrated virtue. Whatever people really think, they are usually polite enough to hear you out. Charlotteans strive for consensus—on boards and in boardrooms, and even in politics (although these deals usually happen behind the scenes). Of course, not everyone plays by those rules. But civility remains a goal to which most of Charlotte aspires. Believe it or not, this approach gets things done.

"Charlotte? That's the city with the Republican mayor that got light rail passed," says a political blogger who also happens to be a regular at the Paradise City Tavern in Northhampton. "How did you manage that?"

If Charlotte is struggling to find a new identity in these times of layoffs and economic dislocation, the tradition of civility might not be a bad place to start. I have a hard time imagining something like Charlotte's faith-based "Friday Friends" initiative, where people make a commitment to meet one on one with somebody of a different race, religion, or ethnicity, happening anywhere else. The same divides exist in the community where I live now, but I see less interest in bridging them. The Bible Belt gets a bad rap when it comes to respecting people of differing beliefs, but Charlotte is one place where conservative Christians and political liberals actually talk to each other — even work together from time to time.

For years, I thought Charlotte was too staid, timid, and conformist. Coming from the North, I was used to a direct, more confrontational style of interaction. Since moving back, I discovered that real conformity occurs when you are surrounded by people who all believe identical things, so that it doesn't matter how they express them. I also discovered that fundamentalists are the same people the world over — whether they call themselves Christians, Muslims, or nonsmoking anarchist vegans.

Civility and conformity are not the same thing. Civility is what makes genuine diversity possible. There is no "real America" or "false America." That's the beauty of it. It's all real. We learn through experimentation, by trying different approaches to solve the same problems. And we learn from each other when we respect each other.

Tess Gadwa is a freelance writer who lives in Massachusetts. She lived in Charlotte from 2001 to 2008 and was a frequent contributor to this magazine. E-mail: editor@charlottemagazine.com

This article appears in the May 2009 issue of Charlotte magazine.
Categories: First Person, Opinion, The Buzz