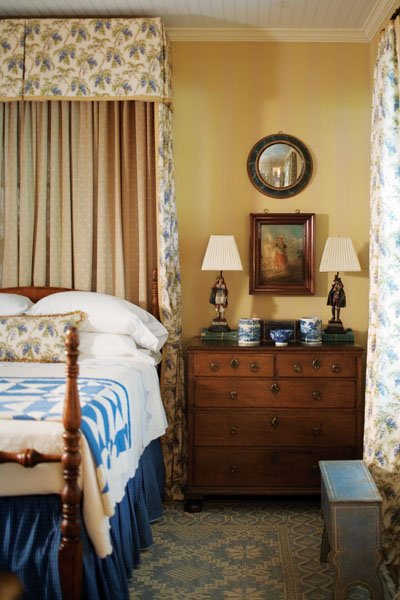 Rather than partially cover a window with her bed, Johnson draped heavy curtains to cover the room’s second window. Because of the thick drapes, the window is invisible even during the day.

On a crisp autumn day, Neal Johnson sits on the front porch of her second home in Aiken, South Carolina, listening to horses and carriages come up the street. Well-appointed riders pass by on chestnut thoroughbreds as falling leaves drift onto the parklike medians. Her two corgis, Bunny and Emmitt, push open the screen door and bark with excitement. Earlier Johnson had quipped to a visitor, "I guarantee you there isn’t another corgi in town that barks at a horse."

Although the small Welsh farm breed is famous for herding, these two city dogs are still getting adjusted to the common sight of horses in Aiken. During the 1930s the town became a haven for wealthy Northerners looking for a winter playground. There are equestrian events from fall until spring, including fox hunts, horse races, vintage carriage drives, and dressage. The venerable Aiken Polo Club has been playing on the same field since 1882.

Johnson bought her weekend getaway two years ago, naming it the Teeny Tiny House, and, like the dogs, it has an abundance of personality for its pint-size frame. At 692 square feet, the former servants’ quarters feels more like a guesthouse than a residence. Built more than a century ago, the wooden structure with a tin roof sits on a corner lot with compact gardens in front and back. It’s postcard perfect, with an arbor covered by fragrant Confederate jasmine vines, fences lined with camellias and white gardenias, and ferns capping snug borders of white impatiens. Every square inch of the Teeny Tiny House, inside and out, seems to thrive in a perpetual state of being pampered and loved.

Inside, the house’s high ceilings provide unexpected breathing room, an aspect Johnson maximizes with relaxing hues, a generous collection of art, scaled-down seating, and handsome antiques, making the house feel bigger than it is. Lighting adds to the ambience, with one-of-a-kind lamps fashioned from antique ceramic tobacco jars, whisky urns, and French papier-mâché figures.
Lamps, in fact, are the specialty of Neal Johnson Ltd., her antiques and interior-design shop on South Cedar Street. Most of the company’s business is with other designers, including such nationally known talents as Charlotte Moss of New York City (who recently bought lamps for her Aspen home), Barry Dixon of Virginia, Suzanne Rheinstein of Los Angeles, and Charles Faudree of Tulsa. "I’m inspired by all of them, every time I’m around them," Johnson says appreciatively. "They’re all terribly creative — and have been successful."

When Johnson purchased the house in November 2007, she began making structural improvements by tearing out the thin interior walls. Soot had built up for decades within the walls, requiring a messy cleaning process. Insulation was added and new drywall installed, the sinking fireplace foundation was stabilized, and ceilings were finished with traditional bead board. The gray floors were left as is, as were a few quirky touches, including a door sawn in half vertically and hung like shutters between the living room and kitchen.

The three main rooms — bedroom, living room, and kitchen — are open to each other in an L shape, so Johnson treated them as a unit. "I love blue, so I just started with the Pierre Frey fabric for window treatments," she says. The French cotton drapes with soft blue flowers are paired against a wallpaper of understated stripes by Cole & Son. Johnson is a world traveler, and her engaging curiosity is apparent in such objects as a carved model of feet commissioned from an Italian woodworker and a French candy box shaped like a fish that she mounted, decoy fashion, on a stand. Silver trophies and eighteenth-century Delft finger vases are on the mantel; pewter chestnut urns are mounted on high wall brackets. Original paintings, portraits, botanical prints, and still lifes give the home a distinguished presence, indicating a knowledgeable owner and collector.

Johnson enjoys shopping during her frequent international travels, a passion nurtured in childhood when she listened to her parents’ stories of exotic trips. After working with corporate clients of British Airways for fifteen years, she decided to combine her love of travel with her knack for finding quality antiques, not surprising since she holds an art history degree from UNC-Chapel Hill and studied at Parsons School of Design. Finding the Teeny Tiny House has been one of her biggest discoveries so far, providing her with a home that is close enough for weekend travel but feels a world away.

Between running a business, traveling, and engaging in charitable interests that include supporting a major study-abroad scholarship at UNC, the time away is a welcome relief. The two-and-a-half-hour drive southeast through rolling hills into thoroughbred country culminates in a town that has attracted outsiders for decades. It’s a big adventure for the dogs as well, who ordinarily hold court in the Charlotte store. "Bunny and Emmitt work every day," Johnson says. "They’re the hardest-working corgis in town."

For the summer 2009 issue of this magazine, Laurie Prince wrote about an interior designer’s Plaza Midwood home.