Restaurateurs of the Year: Karen Teed and Jill Marcus (The Mother Earth Group) 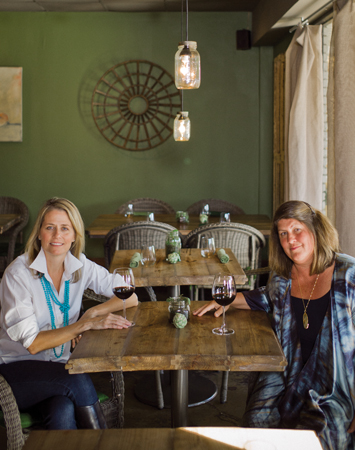 Jill Marcus and Karen Teed entered the restaurant business somewhat reluctantly. Or at least Teed did. Marcus, president of The Mother Earth Group, and Teed, creative director, met after college, and their opposite personalities made them a great match as roommates and, eventually, business partners.
Marcus is a free spirit: she skipped her senior year of high school—without earning a diploma—to start her freshman year at Davidson at seventeen years old. Teed, on the other hand, is  methodical. “I am much more cautious than Jill,” she says.

After beginning their careers (Teed as a wedding planner, Marcus with a series of jobs in various industries), the pair, who both had an appreciation for good food, decided to dabble in catering. First, it was house parties for friends. Then, corporate parties for law firms. Finally, in 1989, they became official as Something Classic. A café in Myers Park followed, and their business grew—today they own two Something Classic cafés, operate inside four local Harris Teeter stores, and just launched a new sandwich shop in the Charlotte-Douglas International Airport. In 2009, they launched the Community Café inside Discovery Place.

In the midst of all this growth, catering gigs kept coming. But what may have been their biggest opportunity—and the one that pushed them officially into the restaurant industry—came from the Mint Museum uptown. Instead of the café that Something Classic had operated in the museum’s former space, the museum’s leadership wanted a full-service restaurant in its new location.

But Teed wasn’t convinced. “When this opportunity came up, I said, adamantly, ‘No. We are not going to have a restaurant,’” she laughs. “And then we talked about it some more. Of course, we had a concept …”

Funding proved impossible to secure, and so they turned down the opportunity—until it came around again a few months later. “Phil [Kline, then the
museum’s executive director] called me and said, ‘You’re back on the table; we’ll find you some money,’” says Marcus.

The result was Halcyon, one of the city’s best restaurants, with Chef Marc Jacksina at the helm. And once they’d proven they could move into the restaurant realm—and do it well—they decided to open the vegetarian restaurant Fern. “We kind of liked the restaurant business, figured we would try it again,” laughs Marcus.

They’re not finished yet. The pair plans to roll out a new concept in 2013, but all Marcus will reveal is that this new restaurant will serve meat. “I think we’re starting to refer to ourselves more as a restaurant group and less of a catering company,” says Marcus.