Review: Bechtler’s Wrestling the Angel Worth the Bout

A COMPLEX WORK of art, whether it’s a towering public sculpture or a classic Hollywood epic, usually begs a question: “How was this pulled off?” A great museum exhibition often does the same. You wonder what challenges it faced along the way, what forces were against it, or where one would even start in trying to contain its scope. Wrestling the Angel, the latest exhibition from Bechtler Museum of Modern Art curator Jen Edwards, has the quality of something that has been toiled over. Within the selected pieces are honest, at times abrasive conversations about religion and politics—two topics not easily traversed, especially within the Bible Belt. Edwards says the idea for an exhibition of "seemingly secular, avant-garde artists" presenting and grappling with religion in their works had been gestating since her collegiate days. Now, Wrestling the Angel arrives three years into her tenure as curator at the Bechtler. Considering how she injects regional perspectives and utilizes the museum’s permanent collection, it’s difficult to imagine this exhibition starting its life anywhere else.

Edwards says her aim was to show artists who use “religious iconography for social critique or who use a spiritual practice to inform their artistic practice.” A majority of Wrestling the Angel’s 219 works are from the Bechtler’s permanent collection—though nearly half of those have never been shown in an exhibition at the museum. The four galleries comprising this enormous exhibition drill down the stated goal even further, whether it’s artists who had a transformative spiritual experience or those who use iconography of religions specifically for social critique. Gina Gilmour crafted the stirring sculpture "Break Your Guns" in 1980, responding to gun violence with a piece then deemed controversial to show. This work appears in the same gallery as Stacy Lynn Waddell's "Untitled (Mike Brown's Battle at Normandy)," a gold leaf memorial to the unarmed 18-year-old (and recent Normandy High School graduate) who was killed by a police officer in Ferguson four years ago. 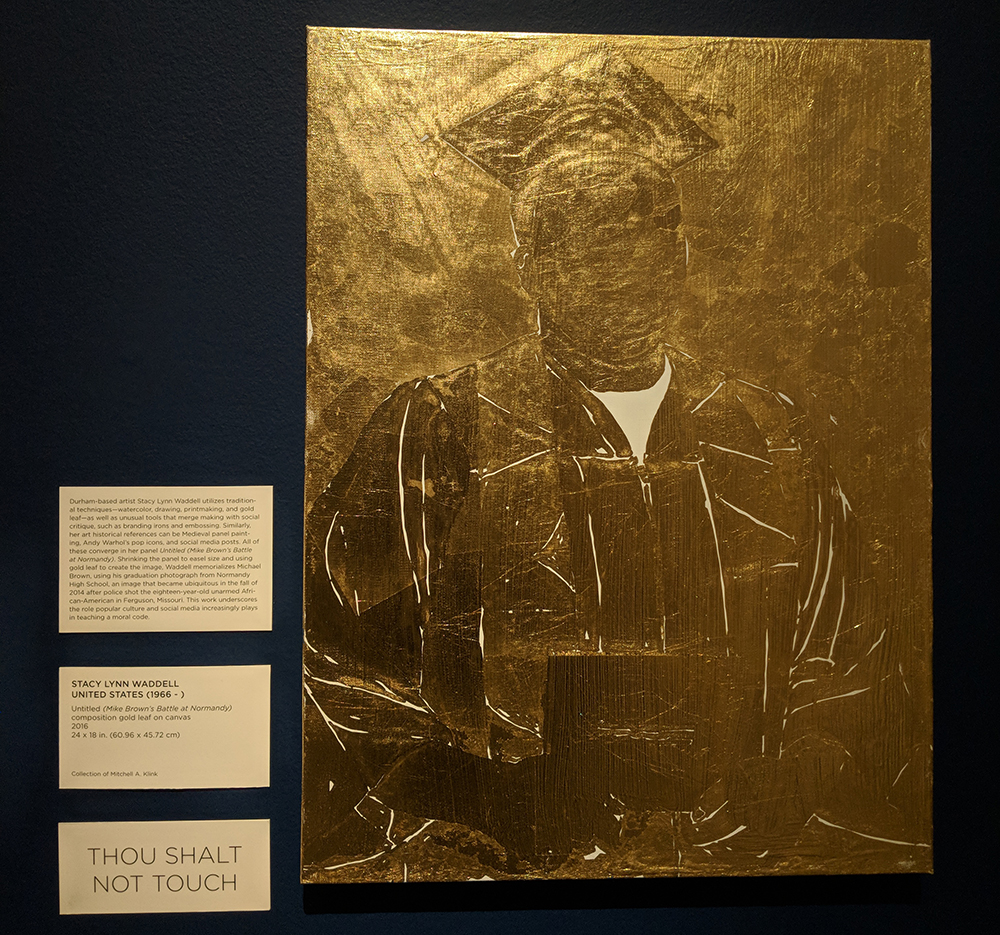 This thematic approach to organizing the show not only helps visitors digest the broad themes of the show, but also creates spaces for the works to dialogue with each other, such as the noted entries from Gilmour and Waddell. The size and weight of this show could have easily become a cacophony of spiritual patter in less capable hands. Yet, when you see the Brown portrait next to Warhol’s ode to Marilyn Monroe, a thread emerges in how images of highly publicized figures are perceived—especially when tethered to tragedy. Likewise, Salvador Dalí’s grace and terror in reimagining Dante’s epic poem Divine Comedy compliments and contrasts with the stark photographs of North Carolina’s Linda Foard Roberts, who comments on the cyclical aspect of life with elegant imagery dwelling on death. 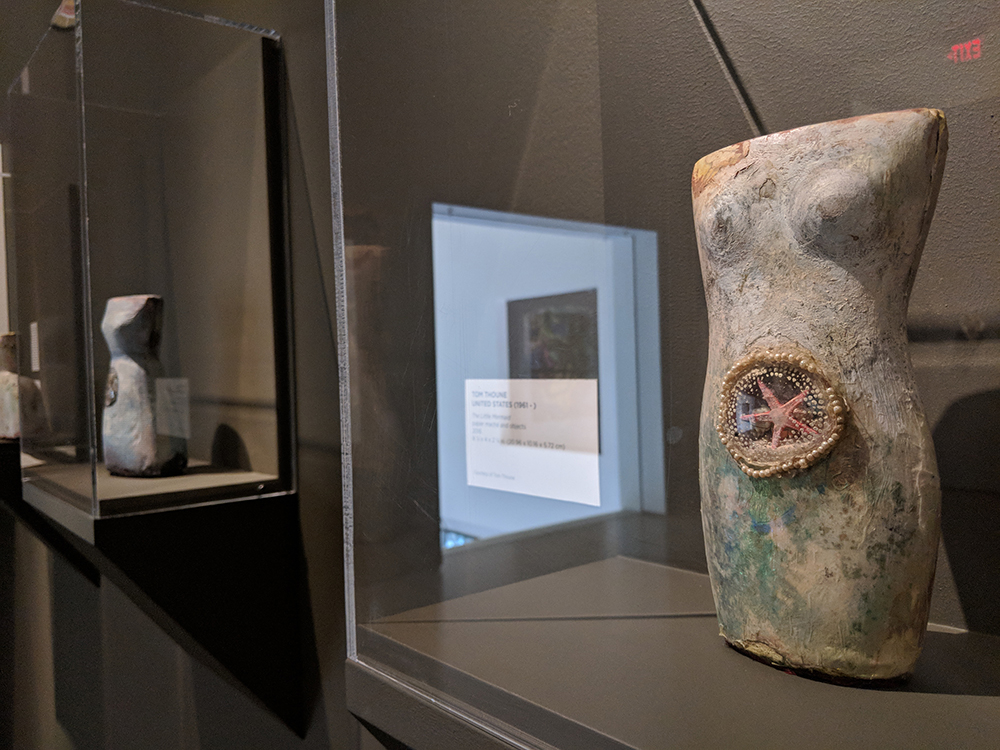 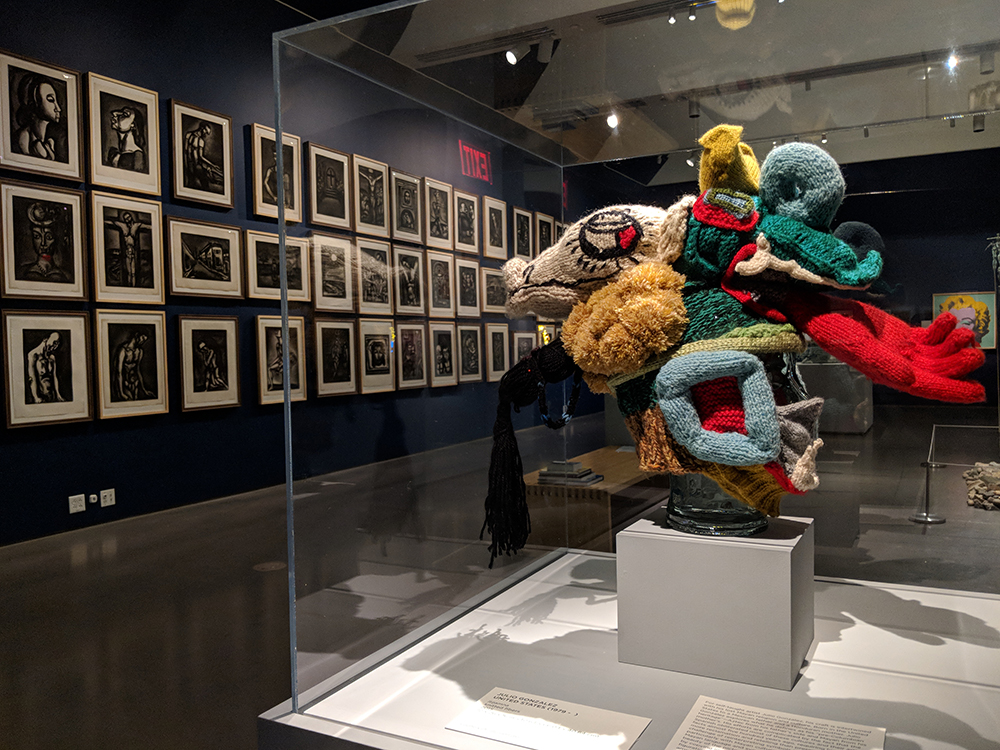 Roberts is one of several regional artists featured here, from Tom Thoune’s reliquaries for literary (yet allegorical) characters to McColl resident Julio Gonzalez’s explorations of Mayan culture and language. Pieces from Romare Bearden, Herb Jackson, Cristina Córdova​, and others underscore both the impact of religion and the diversity of this region. Many know Niki de Saint Phalle’s iconic Firebird, which stands outside of the Bechtler on Tryon Street and has appeared in countless selfies. The artist’s “Cathédrale” is provocative assemblage dwelling on the architecture of religious institution. Yet, the artist would then fire a gun at the sculpture, with paint splatters giving a morbid effect to the work upon inspection. She famously said, "I never shot at God. I shot at the church. I glorify the Cathedral." 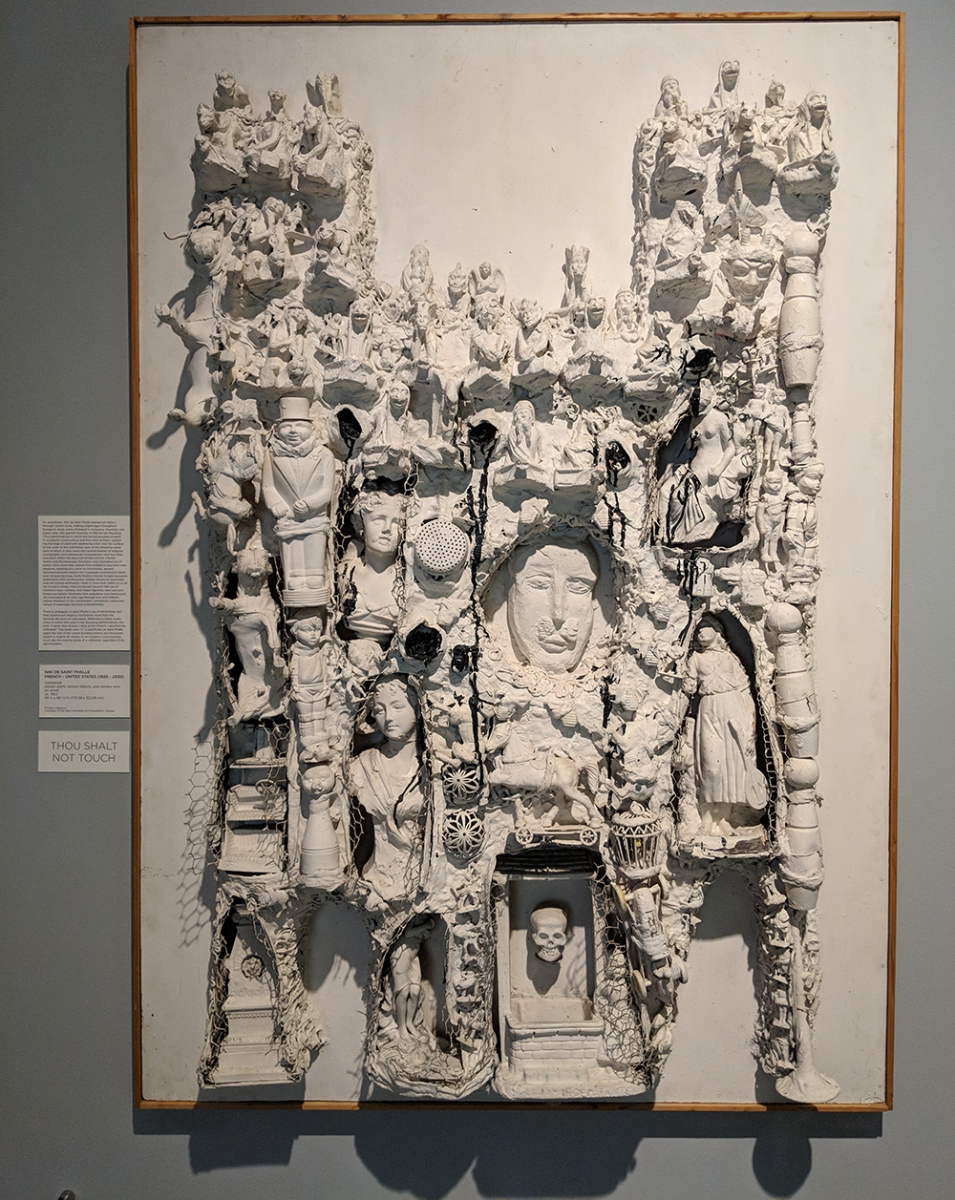 With Wrestling the Angel, Edwards and the Bechtler compel a conversation often set aside as impolite, despite the universal effect of religion. This assembly of work brings a nuance and intentionality that comes without judgment. And for those still hesitant to take part in a dialogue about the topic, visit the exhibition and for a few moments, just listen.

* Southern Tiger Collective recently packed its North Davidson Street space with the striking, all-female show Xōchitl.  Its next one-day event on June 16, AMBUSH!, promises an interactive installation, outdoor murals, and more, and judging by its previous shows, shouldn't be missed.

* Jessica Moss is curating a show at New Gallery in uptown titled "Black Blooded" (kicking off May 30), examining "the diversity and nuance within narratives of tradition, consanguinity, and origin" with luminaries such as Kerry James Marshall, Rashaad Newsome, and several others.

* Goodyear Arts will have a showcase of its April/May residents at Camp North End on June 1. Artists are Debora Koo, Nathaniel Lancaster, and Elisa Sanchez.

This article appears in the June 2018 issue of Charlotte magazine.
Categories: Arts + Culture
Contest of the Month