THEY SAY YOU’RE going to a farm in South Carolina. That’s one of the few pieces of information you get before the trek to Bohemian Grove, XOXO’s experimental performance piece that’s back for a second year. But even that part doesn’t tell the whole truth. Bohemian Grove’s real location is another dimension, one where the surrealism of David Lynch converges with Looney Tunes. Your vessel to its backwoods backdrop is a white, 15-passenger van, snaking through neighboring towns before arriving at the scenic farm. Things get plenty weird before that, though.

Matt Cosper, who conceived and directed Bohemian Grove, drives the vehicle in both a figurative and literal sense. But the Charlotte playwright says the experience was developed by XOXO’s entire ensemble, a slow-burn development process that takes months or years instead of occasional weekends. The story begins the moment the audience buckles in, when Cosper encourages them to abandon cellphones and take in an eerie soundtrack of monologues, old-timey tunes, and natural sounds. The route to the farm becomes a set in itself, as the small-town narrative unfolding in the van’s speakers is set against real-life imagery of graveyards and one church’s shrubs, spelling out the phrase “Holy Angels.”

The brilliance in Cosper’s story is how that tension is relieved as soon as the bus comes to a halt, parked at the feet of two nurses who immediately offer you booze (included in the price of admission). It’s here that we meet our protagonists, attempting to solve a missing persons case with only their short shorts and idiocy at their disposal. The narrative fluctuates between the chilling and the absurd, lightening the mood before tricking you into introspection. With accomplished actors like Jordan Ellis (portraying Sheriff Beef Dickson) and Nicia Carla, the acrobatics between the unsettling and the hilarious are less obvious. 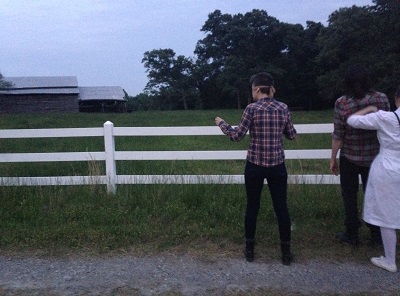 As it gets darker outside, things only get weirder with this XOXO production.

But to give a detailed rundown of the Grove is to give away the experience. The broad strokes may do enough to entice the curious theater-goer: a play in the shape of a party, where you follow characters around the rural property and are forced to take part in its after-life musings yourself. It’s only loosely influenced by the real Bohemian Grove, an actual California campground that annually hosts the world’s most powerful men and allegedly holds cult rituals. The most prominent relation between the two is how weird it makes you feel, while fascinating you in the process.

Even if it’s told to small audiences, there’s an enormity to the message. In a city where experimental theatre is sparse, just the novelty of Bohemian Grove would be enough to mention it in a blog post. But XOXO’s accomplishment is bigger than pulling off an immersive, unique-to-Charlotte experience that’s just a fun thing you did one time. It’s a bold and engrossing work that shows why experimental theatre is worth the investment. This year’s run, lasting until the end of May, highlights this through contributions from the Arts & Science Council. The ASC awarded $5,000 to the group this year to help pay the show’s artists and insurance and rental fees for the vehicle. The result is more people getting to experience the accessible Grove, one van-full of Charlotteans at a time.

Here’s to more of this in Charlotte, a place that hasn’t always been kind to its theatre companies. The hope is that quality, daring productions fuels these ensembles to multiply in every corner of the city—even if their pieces require you to venture outside the county line.

Bohemian Grove runs until May 30. Read more about the experience and get tickets here.