The paintings on view in Clare Rojas’s solo exhibition Shifted Horizons are a meditation on change and feminine strength. Rojas is primarily known as a visual artist, both in large scale murals and smaller paintings, but she’s also a musician who pairs thoughtful lyrics with a folksy sound. This exhibition blends her mural practice with painted canvas and infuses the combination with musicality and playfulness. 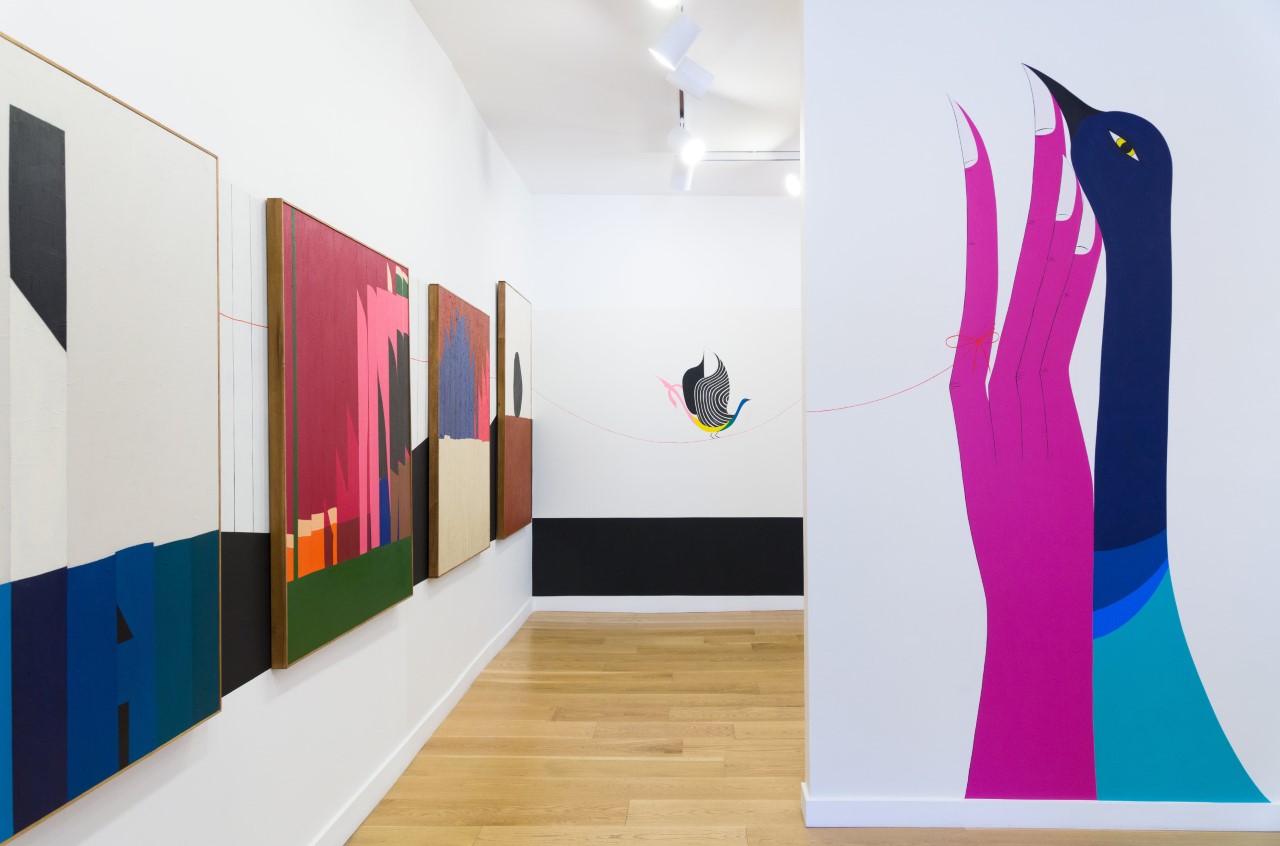 The work on view, which comprises her second solo exhibition with SOCO Gallery, is part abstract landscape and part figurative. The abstracts consist of vertical stripes of flat color fitted neatly together, with a horizontal demarcation. These elements culminate in a positive mood: The vertical bands lift the viewers gaze upward; bright colors imply cheerfulness; and the “horizon line” focuses on what is coming next.

In the small space, Rojas keeps her paintings from floating in solitude on white walls. They are not islands: They speak to each other, a conversation aided by the mural elements, which weave around the works and visually connect them.

Walking in the gallery, visitors see a freestanding wall with a bright pink hand vertically extending from the floorboard. The fingertips lightly touch the head and beak of a long necked bird. The curve of the fingertips matches the contours of the bird’s chin and beak exactly, an alignment that asks whether this touch is controlling or tender. A red string is tied to one of the fingers in the universal “Don’t forget!” style. The thread travels to the edge of the wall and jumps (visually) back to the wall beyond. It is one of two optical illusions, the other being two bird heads peeking over the right edge of the freestanding wall, whose bodies are continued in the large diptych on the wall behind. Standing in the right place, and at the right height, these elements align. 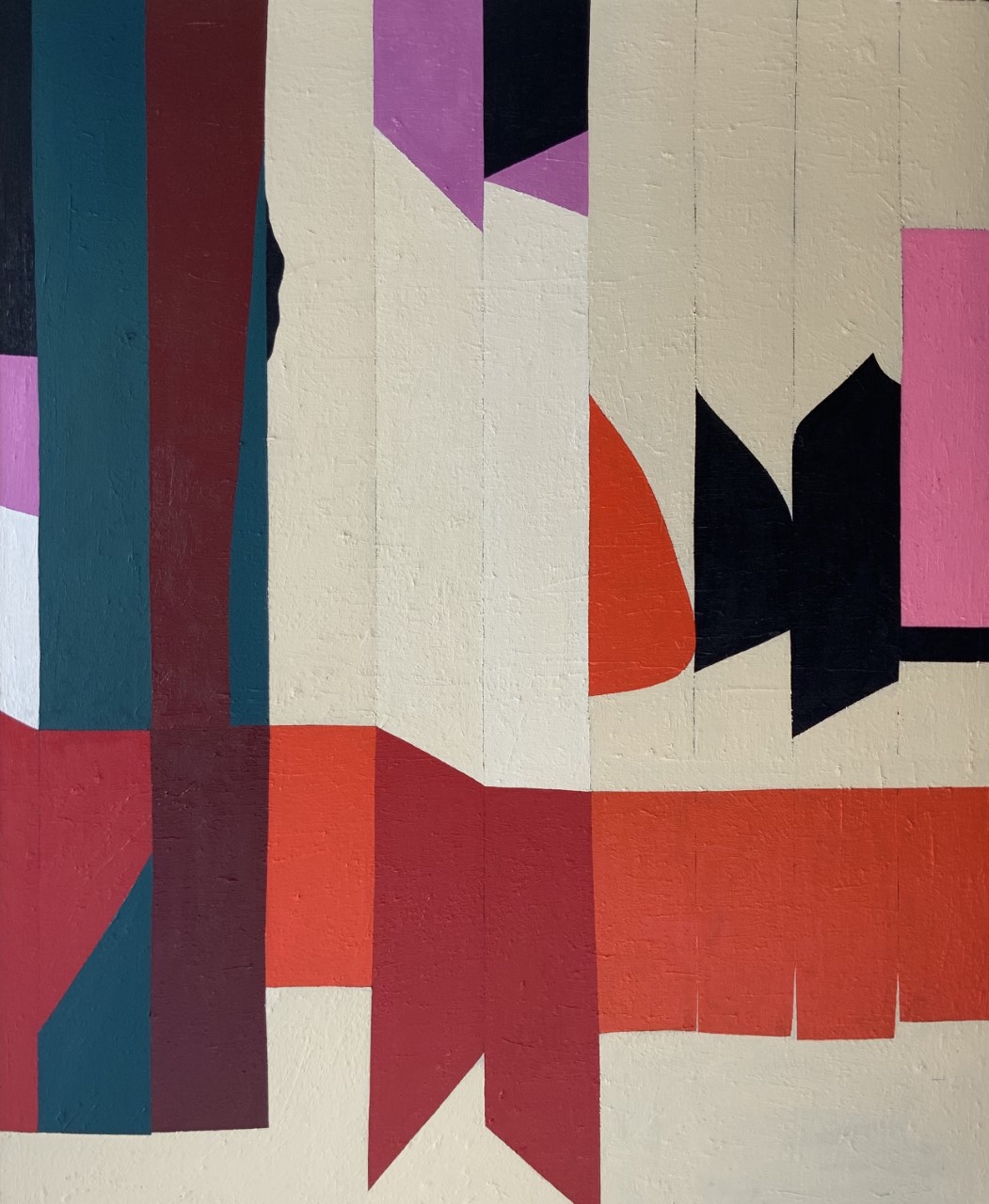 The red thread that jumps to the back wall first meets a winged bird, then travels behind a series of paintings. It streaks through a painted band whose lower part is black and intersects with the white upper portion along a line that follows the the actual horizons in the paintings that sit upon it. The thread lands in the hands of a woman who holds its end (or perhaps its beginning). Of the five vertical paintings hung on the banded wall, four are boldly and multi-hued. These and other works show her innate knowledge of color theory, which goes past what can be taught. Rojas makes color look easy. Generally, the horizon lines are disjointed except in the case of one outlier, which is white in the top half and brown in the lower half. Sitting atop their intersection is a large black form that most closely resembles a boulder. It is a period, an end, a rest.

Elsewhere the colors are like a melody, with moody blues adding soul, cheerful pinks bringing poppy refrains, and solid browns serving a consistent bass. The musicality of the paintings pairs well with the horizons and provides a visual soundtrack to the truth that there is a future and that endings also mean beginnings.

Her figurative work shows single females mingling with birds, yet another symbol of change. The largest framed work on view, which is a diptych, shows a woman kneeling with both palms vertically extended, touching the necks and heads of birds which run up against it. The two forms meet perfectly and meld into each other. Is the woman greeting the birds? Or is she blocking them? They appear to be coming through to meet her via a portal. In the deepest reaches of this space, solitary parts of birds (a wing, a beak, a body) float independently, and the closer they come to the woman, the more complete they become. They begin as ideas and end as fully formed thoughts, and only then are they ready to meet the woman. A smaller painting shows a female figure holding a bird in her lap. It is belly up and she rests her hand on it while she looks away. Perhaps she has quelled the unwanted omen.

Rojas presents the female as delicate, strong, capable and undaunted; she is the one who can tenderly touch wild things, one who can thread and connect different ideas together, one who isn’t scared by change and newness, even when it flies at you from unknown places. All in all, viewers of Shifted Horizons are offered a glimpse into the artist’s present state of mind, and there is a hopeful future ahead. 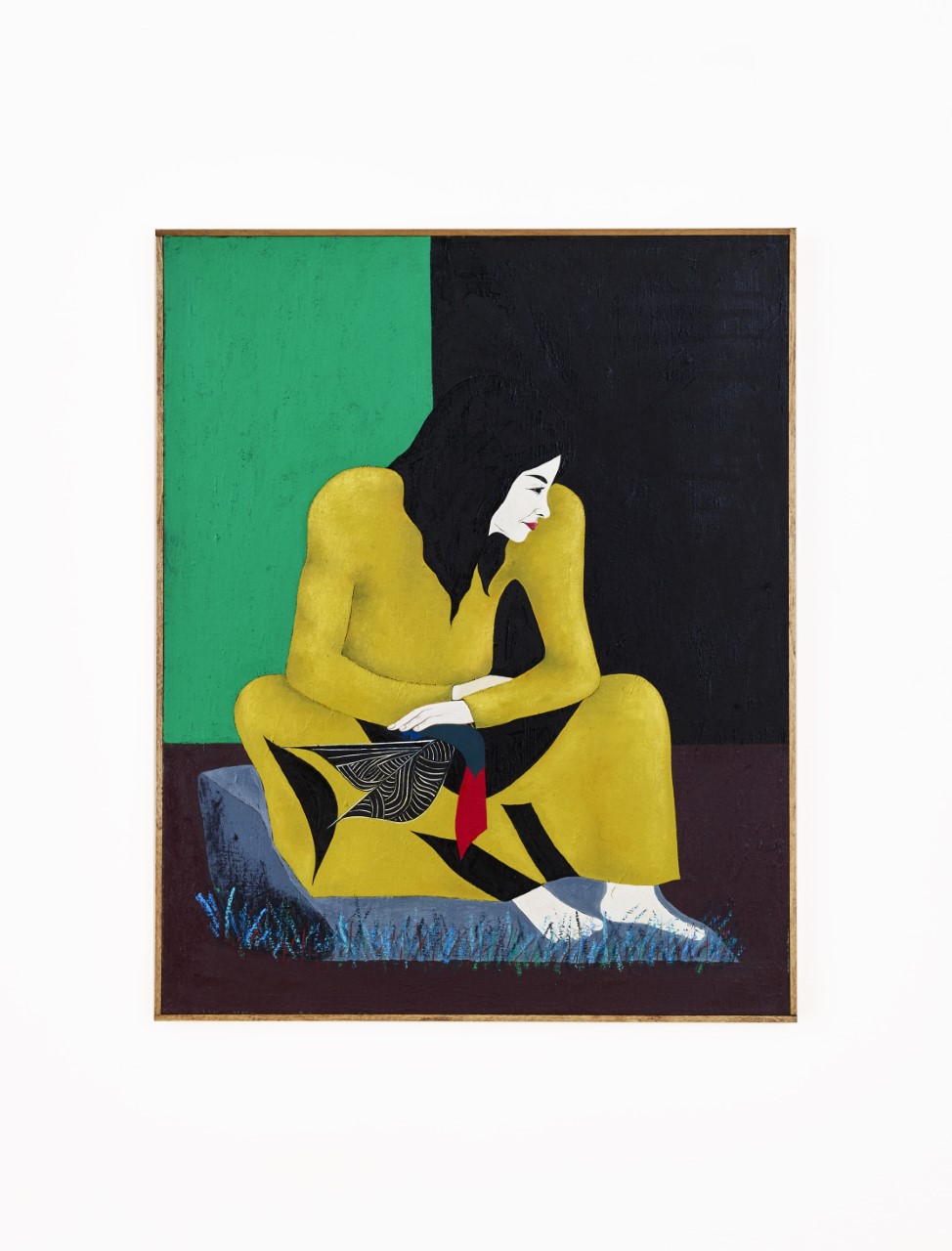