Review: PaperHouse Theatre’s Much Ado About Nothing at Frock Shop

THE DIFFICULTY OF REVIEWING immersive theater is that each attendee has a singular experience. I was reminded of this during dress rehearsals for Much Ado About Nothing at the Frock Shop on Wednesday, when actor Sarah Woldum approached me, in character, as the oafish Borachio. In a husky, fully committed voice, Woldum beckoned me away from the group and said I’d be briefly acting in the next scene as the character Conrade. I had every opportunity to abandon the charge but was somehow compelled to follow through. And then, it was time for the first line. 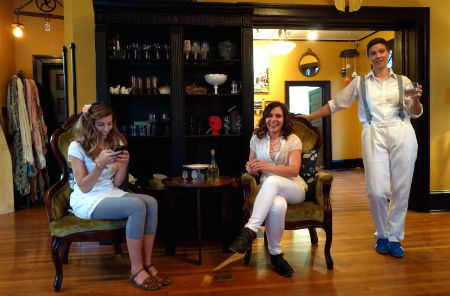 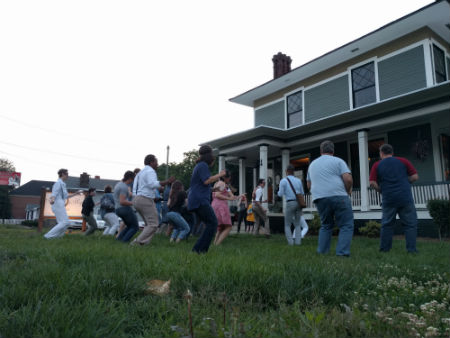 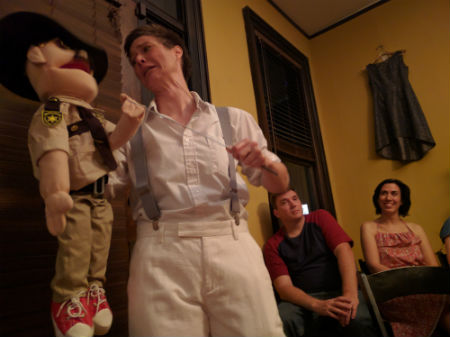 Sure, any theater-goer can garner something different from classical stage productions. Any story may connect with someone's personal experience or resonate in a specific way. Yet, in experimental theater, audience members are given differing vantage points, often sectioned off for certain scenes, and sometimes even granted some lines. That’s the tension that underlies every piece of experimental theater: Am I going to be asked to do something? (For this production, only one audience member is asked to do say a couple lines, so 29 attendees are audibly off the hook.)

Not all of us enjoy that temporary spotlight. Yet, part of PaperHouse Theatre's success in staging Much Ado About Nothing is crafting a wholly immersive experience, set against the backdrop of an historic home in Plaza Midwood. Inside and outside the clothing store, a (slightly) modernized, irreverent version of the tale disarms as quickly as the laughs begin—which is to say pretty quick.

By the time I was asked to become Conrade, the audience had already donned masks and danced on the lawn of the The Frock Shop, as passing cars honked during the comedy’s masquerade ball. The action puts you inches from the actors, in each of the rooms and venues Much Ado. Each portrays multiple characters, and there’s more than just gender-swapping: The performers switch between sincere primary characters and silly secondaries. Andrea King shines in her dual roles as the headstrong Governor Leonato and an over-the-top, hillbilly version of the constable Dogberry. (When she can’t change fast enough between the characters, she employs a puppet version of Dogberry.) And Woldrum’s elegant, lovelorn Hero is nothing like the belligerent Borachio.

Though their attire and comic energy feels more modern, the actors in this version of Much Ado maintain the original dialogue of the play, even when messages are delivered via smartphone and a constable dresses like a Reno 911 character. The famous scribe’s words may require an initial period of adjustment for the listener. As the narrative progresses, though, the themes, tension, and humor of the 400-year-old story transcend time.

One of the more mysterious machinations of this production is how viewers are navigated between the corporate and intimate scenes of Much Ado. The audience, capped at 30, transforms from wedding congregation to invisible viewers, as Shakespeare’s lens tightens on one character immediately after a major scene. It’s seamless trickery, duplicated over the course of the performance. For the process to work, there's also a slight dependency on your fellow attendees, too, who are hopefully as lively and apt for laughter as Wednesday's crew.

The success of Much Ado at the Frock Shop also speaks to the enduring relevance of Shakespeare, whose pieces continue to be dissected, rearranged, and reassembled by contemporary troupes. Even in experimental theater, there’s room for masterworks.

But maybe you’re like me, and you’d rather not be put on the spot during these immersive shows. What’s key is that PaperHouse earns the right to make us experience art with them, inviting viewers inside the machine of live theater and not flinching when closely scrutinized. The least we could do is awkwardly affect a Shakespearean cadence and for a moment, become Conrade.

Much Ado About Nothing runs through June 11 at the Frock Shop. Tickets here.

This article appears in the May 2016 issue of Charlotte magazine.
Categories: Arts + Culture