A look back at those disorganized, wild years

Thirteen times during the 1936 season, “The Strutter” took the mound, and 13 times the Charlotte Hornets of the Carolina Baseball League won. It was an impressive streak, but observant fans noticed that his turn to pitch always coincided with days the Hornets played in the friendly confines of Robbie’s Field on South Mint Street.

The other teams in the Carolina League noticed, too, and they didn’t appreciate that The Strutter pitched exclusively at home. A rumor circulated that Shaney’s advantage was due to phonograph needles he slid into the seams of the baseballs the Hornets provided for home games. These doctored baseballs, they claimed, gave The Strutter’s pitches extra movement, rendering him virtually unhittable. Shaney and the Hornets laughed off the rumors. They insisted his preference for home games was just another hook to attract fans.

The Struttin’ Bud controversy was one of many in the Independent Carolina League, the “Outlaw” professional baseball association that briefly operated in the mill towns around Charlotte from 1936 to 1938. Like much of the country, this region was crazy for baseball as the sport earned its reputation as America’s pastime.

Larger towns were homes to minor league teams affiliated with major league parent organizations up north, but smaller textile mill towns got their baseball fix by coordinating semipro leagues, exhibitions, and extended series merely for regional bragging rights. Some cities, including Charlotte, were home to minor league and semipro teams.

These mill towns had sprouted up rapidly in the late 1800s, as the area became a hub for the cotton trade. By 1919, Gaston, Cabarrus, and Mecklenburg counties claimed more active textile mill spindles than anywhere else in the state. Every mill resembled a small town, and often included a ball field, the mill store, and housing for the displaced agricultural workers (exclusively white in the Jim Crow South) who worked in the mills. The passion and demand for a distraction from the rigors of mill life drove these communities to organize teams. Soon, semipro “Mill Ball” leagues became a fixture of life in the Piedmont.

IN 1927, nine years before the Struttin’ Bud controversy, the Kannapolis Towelers and the Concord Weavers had had enough of one another. During a loosely-organized season, the two clubs played to a draw, and team owners organized a final championship series in early September to crown a winner. The timing was fortuitous: The “organized” minor leagues in the area had finished their seasons a week earlier, and several talented professional players suddenly became available. There were rules about the number of pro players each team could have on its roster—but neither side bothered to follow them. An arms race ensued, as each team moved to sign as many professionals as it could. The increased talent level stoked the community’s interest, and the first game of the series became the social event of the summer. More than 3,000 fans showed up, all wearing their Sunday best. Another 4,000 people watched from the trees and hills outside the ballpark. 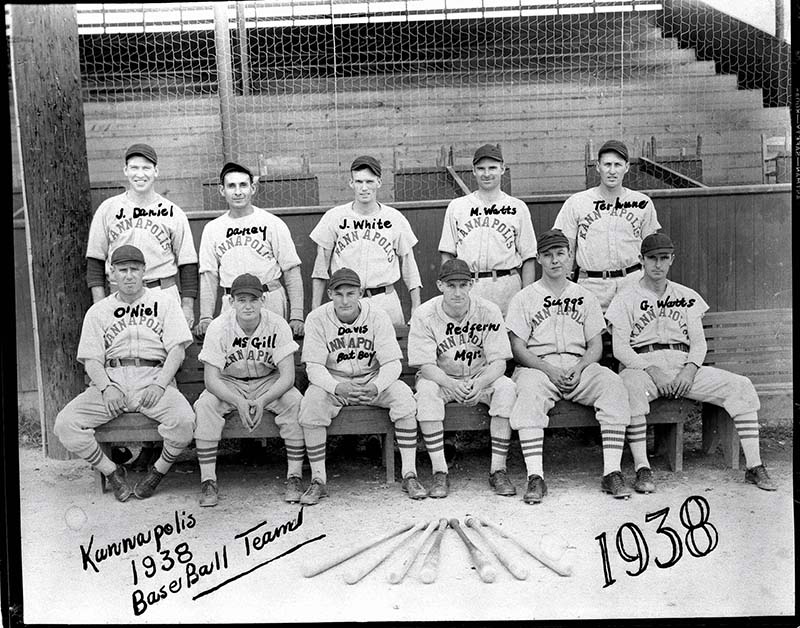 The Kannapolis Towelers had a fierce rivalry with the Concord Weavers.

The matchup made it to only the first inning, before a controversial call by an umpire resulted in an on-field scuffle among players. The fight spilled into the stands, where fans joined the melee. The only thing that stopped the stadium-wide brawl was a late-summer thunderstorm, which sent fans searching for cover in their church clothes.

The next day, leaders of Concord and Kannapolis issued a joint proclamation that all subsequent games in the series were canceled, and neither city had a claim to the championship.

Although the game failed to determine a champion, it did establish the region’s undeniable passion for baseball. The onset of the Great Depression two years later resulted in a boon for the talent levels of the textile mill baseball teams. Half the leagues operating in the National Association of Professional Baseball Leagues (NAPBL) folded during this time, leaving many high-level ballplayers without an opportunity to play professionally or earn a steady paycheck.

Through this period, mill ball became increasingly organized. After a successful 1935 season operating as the semipro Carolina Textile League, team owners made the decision to exploit the region’s appetite for baseball and create a full-blown professional league for the 1936 season. The league finished its first season with eight teams, a few of them sporting delightful, mostly textile-themed nicknames: the Charlotte Hornets, Concord Weavers, Hickory Rebels, Kannapolis Towelers, Lexington Indians, Mooresville Moors, Shelby Cee-Cees, and Valdese Textiles.

Dubbed simply the “Carolina League,” the league capitalized not only on a strong community spirit of independence and pride, but also represented a collective regional resistance to any “northern organization.” A baseball league that was independent from the unionized NAPBL appealed to many textile workers, who preferred their factory and their baseball free from meddling northern carpetbaggers. A successful baseball league made up of Southern mill workers, run by Southern mill workers, without the help of any Yankee agitators, would show the country that North Carolinians were perfectly capable of organizing on their own, thank you very much.

Joining a team in the Outlaw League wasn’t a simple decision for professional players. The NAPBL made it clear that it did not endorse the upstart league, and after the 1936 season, it began to disqualify players who participated in Outlaw games from organized baseball. This led to all kinds of shenanigans and rule-bending, as teams and players attempted to conceal the names and appearances of players and enable them to continue to play (and collect paychecks) from both organized baseball as well as the Outlaw League.

Keeping the Carolina League afloat to spite organized baseball was a community effort. Fans housed players and chauffeured them to away games. In the stadium, rough language and heckling were common, and many games were marred by violence in the stands among rival fans. Mentions of Outlaw League games in area newspapers were peppered with frequent mentions of controversial calls on a pivotal plays resulting in fistfights on the field, scuffles in the stands, and umpires leaving the game to find that their tires had been slashed.

Despite this passion from fans, the league ultimately unraveled because of the very things that made it great. The controlled chaos that came from constantly increasing player salaries, as teams signed more and better professional caliber talent, proved too much to sustain. Revenues were strong for the teams in the hunt for the championship, but without a league-instituted revenue-sharing model, teams at the bottom of the league standings had trouble attracting enough fans to pay the bills, and eventually folded.

The Outlaw League ceased operating as an independent league after the 1938 season, as the larger teams were absorbed into the organized minor leagues or returned to semipro status. Although it ultimately ceded its territory to organized minor league baseball, the Outlaw League’s remnants remain throughout the Piedmont. Today, Kannapolis and Hickory enjoy minor league teams with passionate followings, and the Charlotte Knights now play a few hundred feet from where Struttin’ Bud once took the mound. A trip to BB&T Ballpark may involve more craft beer and pulled pork nachos than a fistfight in the stands, but keep your eyes on the field.
A pitch that dodges and weaves on the way to the plate might just have a phonograph needle tucked between the seams.

JOHN SHORT is a freelance writer (among other professions) who loves digging up Charlotte’s past and pondering its future. Email him at jwesleyshort@gmail.com with your favorite Charlotte history trivia, or just say hey when you see him on the streetcar.

This article appears in the April 2017 issue of Charlotte magazine.
Categories: In Print, The Buzz
Contest of the Month