Developer Ray S. Farris—or “Rip” as he’s known—is the kind of guy who responds to a challenge with a certain je ne sais quoi represented by a smile and a shrug. Neighbors angry about a new building? Been there. Homeowners fighting housing density? Done that. Professional peers taking him to task for the way a proposed project looks? All part of a day’s work. 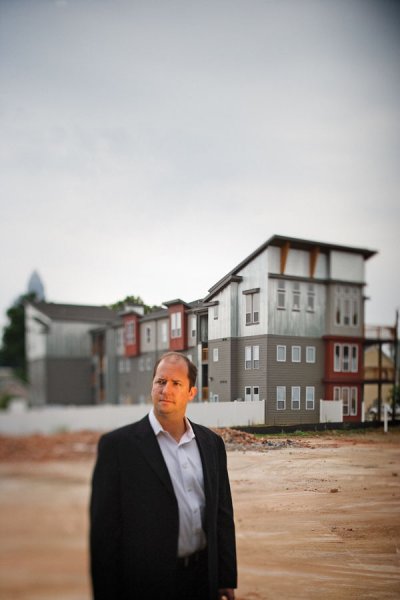 Iconoclastic developer Rip Farris is preparing Charlotte for its future—but not everyone shares his vision.

Developer Ray S. Farris—or “Rip” as he’s known—is the kind of guy who responds to a challenge with a certain je ne sais quoi represented by a smile and a shrug. Neighbors angry about a new building? Been there. Homeowners fighting housing density? Done that. Professional peers taking him to task for the way a proposed project looks? All part of a day’s work.

Tall and lean, Farris even has the ability to joke about his thinning hair—specifically, about how some of the surprise aggravations of any given project often make him feel like pulling it out. Yet if you get him talking about Charlotte’s future with regard to population and housing, you can almost feel the adrenaline rush.

“Charlotte is growing so quickly,” he says, barely pausing for breath. “I’ve seen a statistic that says in twenty-five years, we’re going to have 4.5 million people in the greater metropolitan area. Now’s the time to design these edge-condition areas, the corridors that feed the center city. We have one shot at it.”

This ability to see the future coming at us, and fast, is why noted New Urbanist planner Tom Low, who has publicly bemoaned the direction that a couple of Farris’s recent projects have taken, describes Farris, thirty-nine, as “one of a handful of young and middle-aging developers who are going to lead Charlotte into the twenty-first century.”

“Do you remember the old McDonald’s?” Farris asks as we step onto the terrace of The Watermark—the midtown glass-and-steel office building that architect David Furman calls “one of the coolest buildings in town.” Developed and conceived by Farris, The Watermark stands on a site that within a few years will be right in the middle of the activity along the revitalized Little Sugar Creek greenway. At the moment, the site is bordered with yellow-and-white caution tape and thriving vines of kudzu.

These particulars don’t dampen Farris’s excitement because, earlier on this day, work cranes lifted off the first piece of the cement cap that has covered Little Sugar Creek for nearly fifty years.

“This is going to be Charlotte’s finest open space,” he says, gazing over the spot where the aforementioned McDonald’s restaurant once stood. Later, he’ll pull out an oversize rendering of the city’s plans for the greenway, complete with a bubbling fountain just a coin’s throw from The Watermark. “It’s our Central Park.”

Being in the right place at the right time—or, more accurately, finding the right place before anyone else—might be the knack for which Farris is best known. His company, Tuscan Development, offered townhouses in the Third Ward before Gateway Village emerged from the earth. Tuscan’s Tivoli project was one of the first in the First Ward, when it still was called the First Ward. Tuscan also led the way in humble Optimist Park and the area around Fifteenth and Caldwell streets, which isn’t quite NoDa.

Farris explains that Tuscan seeks possibilities “in between the growth areas,” in so-called “edge condition” neighborhoods. The Tuscan team researches about 150 properties each year before proceeding with development plans for, perhaps, three of them.

“Rip is definitely not afraid to pioneer, to go into neighborhoods that haven’t been ‘hot,’ ” says Furman. “He’s finding these neighborhoods, tapping into their potential, and pushing them along to where they can be better places to live.”

Tarik Abdel-Hameed, a twenty-nine-year-old UNC-Charlotte graduate with a degree in architecture, says that’s one reason he has enjoyed living in Tuscan’s Opt12 project in Optimist Park. “It’s a very diverse place, making connections for different types of people,” he says, adding that “it has sparked my involvement in the community.” He likes that he can get to his Elizabeth Avenue workplace in six minutes by car, or eight by bike—and it doesn’t hurt that Opt12 has an open floor plan and a lot of windows. “It’s a little bit edgy,” Abdel-Hameed says, with an inflection that suggests he likes it that way.

“Edgy” may seem, at first, to be a far cry from Farris’s Eastover address or prep-school roots. He grew up in Charlotte and attended the boarding school of Deerfield Academy, in Massachusetts. After earning his bachelor of fine arts from UNC-Chapel Hill in 1990, Farris received a master’s in architecture from the University of Colorado, and then a master of design studies degree, specializing in real estate development, from Harvard. He later joined the advisory board of the Harvard University Graduate School of Design, and the board of advisers for the MBA program in real estate at UNCC.

Farris is quick to point out that he was trained as an architect, but is not licensed as one. Instead, he likes to find the next great area for potential.

“I’ve realized how powerful perception is,” he says, “and I’m fascinated by what people see [at a certain site]—and what people fail to see.” Clearly unafraid to say, “What if?,” Farris’s team conducts micromarket research on potential buyers—where they have dinner, what kind of car they drive, what magazines they read—and then collaborates with architects “to come up with great concepts.”

Sometimes those concepts can be a little, well, out of the box—such as Tuscan’s Central27 project in Plaza Midwood. With its harvest-gold coloring and metal roll-up garage doors, Central27 might be edgy, and it might be hip, but it doesn’t exactly fit in with the historic bungalows around the corner.

“I like Rip. I have great appreciation for Rip’s willingness to be creative,” sighs Low, “but just giving the people what they want isn’t enough.” Low decries Central27 as “absolutely deplorable,” likening its street-level garage doors to “dead storefronts in a shopping mall.” In early June, Low wrote an e-mail to the editors of The Charlotte Observer—and copied 1,200 of his closest friends—criticizing Tuscan’s latest project, Duo at Central/Briar Creek, for having “no front porches, no front door, no evidence of human habitat, no connections to the surrounding community.”

Farris says the criticism doesn’t get under his skin and that he believes, in fact, that such debate is healthy for a community. “Everything can’t look the same. If you travel to any great city, you see such a range of styles and architecture. Different people react to different styles. If everything looked the same, we’d have a boring city.”

The Watermark, with its modern styling, certainly doesn’t look the same as the seventy-year-old houses nearby.

“They didn’t want this to happen at all,” Farris responds. “They didn’t want anything that would block their view [of the greenway]. We realized they weren’t going to let us do anything, so we just had to press forward.”

Similarly, Tuscan is pressing forward on the Duo project, quickly revising the original design after some internal discussion. Tuscan Development—meaning Farris—apparently won’t accept the status quo for a second more than it has to.

“Charlotte’s a great city,” Farris says. “And whether we’re ready for it or not, we’re going to have the [population] density…. Now is the time that we have to design Charlotte.”

This article appears in the August 2007 issue of Charlotte magazine.
Categories: Buzz > Business
Contest of the Month