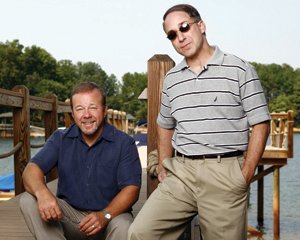 Lou Amico used to start and end every day mired in bumper-to-bumper traffic as he commuted to and from his job in Manhattan. Now he lives in Charlotte—and he doesn’t deal with traffic at all.

Charlotte has its fair share of highway snarls, but Amico found a way around them. He seldom climbs into a car anymore. He fires up a boat.

A few years ago, the marketing exec started traveling to his business partner’s house by way of Lake Norman. And now he’s spending more than commute time on the water. “We’ve been entertaining clients on the boat, holding business meetings,” Amico says. “Turns out this working on the water—it makes really good business sense.”

Amico is president of a multimedia marketing and communications firm called LA Management Co. He started the business here after he and his business partner, Joe Zammit, decided to abandon the rat race in New York City. Coincidentally, they both had family in Charlotte and so they were familiar with the area. When they began to talk about the possibility of moving here, “we sent out this mass kind of e-mail looking to see if we could find work, and we got eight appointments right away,” Amico says.

So Amico moved with his wife, Janet, and their two teenagers in August 2003, and Zammit followed a year later. Amico has a waterfront house in Denver; Zammit lives on the lake in Mooresville. “As soon as Joe moved here, I began using the boat to commute,” Amico says. “I walk out to my dock, start up the boat, and light a cigar.”

“Obviously your clients are going to feel comfortable when you get them relaxed,” adds Zammit. “And then you can get down to business much easier.”

Cornelius resident Patrick Heidrich owns the Charlotte arm of Sandler Sales Institute and he, too, uses Lake Norman to woo clients. “We’ll go wakeboarding instead of golfing,” Heidrich says. “The lake gives you so many options."

This article appears in the September 2007 issue of Charlotte magazine.
Categories: Buzz > Power