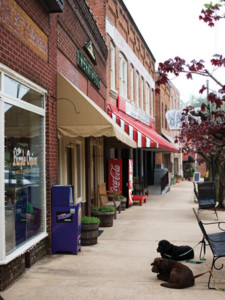 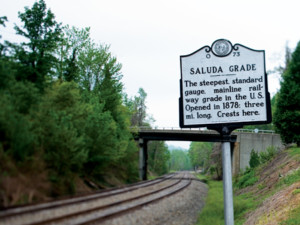 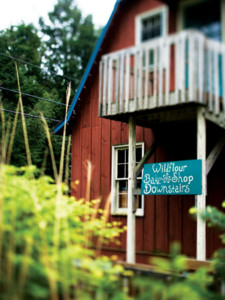 This historic railroad town features tree-lined streets, historical charm, and small town warmth—all with views of the picturesque Blue Ridge mountains. Shady trails, cool rivers, and waterfalls offer a respite from the summer heat while family-owned shops and restaurants are the perfect break from the city.

The Saluda Grade railroad ceased operations in 2001, but the town of Saluda remains focused around its once busy railway

While Saluda's historic district includes several restaurants for taking in Main Street while you dine, if the weather's right, Saluda's nearby mountains and parks are perfect for picnics. Pick up some sandwich supplies and a shake at Thompson's Store & Ward's Grill, a familyowned convenience store and neighboring soda shop that have been selling deli meats and frying up hamburger patties since the 1940s. Or, if you don't feel like making your own, head over the tracks and get a barbecue sandwich from Green River Bar-B-Que, a countywide favorite for pulled pork and brisket. Thompson's Store & Ward's Grill, 24 E. Main St., 828749-2321; Green River Bar-B-Que, 131 West Hwy. 176, 828-749-9892

While Saluda's downtown has plenty of offerings, its surrounding forests and national parks are irresistible for hikers. If you're in the mood to hit the trails, wind down the rugged Pearson Falls Road out of downtown for about ten minutes until you see the sign for Pearson's Falls. It's a tiny park with a mossy, quarter-mile trail that winds to the ninety-foot Pearson's Falls. There are picnic tables all along the trail, but if you get there early, you can snag one right next to the falls. Of course, you can only get so close to the water, so for a more adrenaline-inducing trip, try Green River Adventures, a small outdoor adventure store downtown that offers inflatable kayak trips and guided waterfall hikes down the Green River. pearsonsfalls.com; Green River Adventures, 111 E. Main St., 828-749-2800

This mountain town lies on the Saluda Grade, a stretch of Southern Railroad known at the turn of the century for being the steepest of its kind in the country. There are no trains rolling through Saluda anymore, but vistors still have a chance to experience the railroad culture with a lap or two through the Historic Depot District, the one-time train station turned shopping center, where shops like Salamander sell specialty lotions and candles, cookbooks, and home décor. If you're lucky, your trip will fall on a day when local musicians are playing in the depot's open-air listening room, which was created by the space between the caboose and nearby buildings. Salamander, 7 W. Main St., 828-749-3466

Before you hit the road, grab dinner and a beer at The Purple Onion, a restaurant, bar, coffee shop, and (Thursday through Saturday nights) concert venue that draws people from all over the area. The menu features local produce, meat, and fish, such as locally caught trout with chipotle remoulade and cheddar grits. You'll also find pizzas for sharing, local drafts, and homemade desserts. 16 Main St., 828-749-1179