WHY GO IN JANUARY The beautiful beaches of Puerto Rico are less than a four-hour plane ride from Charlotte-Douglas. You spend that amount of time on I-485 every day. Plus, the third week in January is the Fiestas de la Calle de San Sebastian (see below). 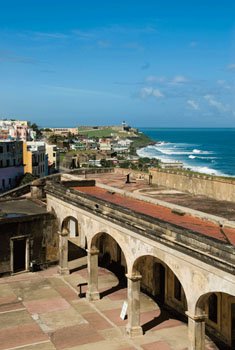 If you’re not into dancing till the morning hours with the locals, trade your beer money for a tour of Castillo de San Felipe del Morro or "El Morro," the striking, 140-foot fort that stood for more than 400 years in defense of San Juan. You can tour it for $2 (787-729-6960)

It’s like South Beach…sort of. The hotels and resorts look and feel like Miami’s hot spot, and the San Juan Marriott (1309 Ashford Ave., San Juan, 800-464-5005, www.marriott.com, rooms start at $179 per night) is no different. In the heart of the country’s capital, the Marriott boasts beachfront views, an accommodating staff, and activities for everyone from newlyweds to families to spring breakers.

Leave the hotel. Puerto Rico’s culture is rich in tradition, and a $12, seven-minute cab ride takes you from the Marriott to Calle de San Sebastian in historic Old San Juan. It’s here, on the third week in January, where you can partake in Fiestas de la Calle de San Sebastian, a party on par with Mardi Gras. For one week culminating January 21, thousands of Puerto Ricans and tourists visit Old San Juan for music, parades, crafts, and, you guessed it, parties, parties, parties.

Don’t overpack. The average year-round temperature here is in the mid-80s, dropping to (maybe) 70 at night, 60s in the winter months. Dress lightly but come prepared with rain gear for the almost daily, but brief, afternoon showers.

Laguna Grande…check. Witness an awe-inspiring natural phenomenon at Laguna Grande in Fajardo, about an hour’s drive from San Juan. Experienced guides lead guests on a nighttime kayak tour into a bioluminescent bay filled with Pyrodinium bahamense, an itsy-bitsy organism that glows when disturbed. It’s romantic and thrilling, and a great workout as you row an hour in and out of the magnificent lake. —Nicole Ewing

This article appears in the March 2008 issue of Charlotte magazine.
Categories: Feature
Contest of the Month