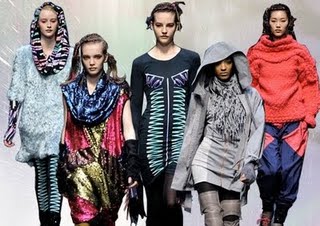 Last week, after leaving Shop Talk in the very able hands of Jenn, I took a lovely little trip to London. In order to make myself feel better after receiving numerous evil glares and my fair share of hate email from Jenn for leaving her behind, I decided to hit the city’s high streets for a bit of shopping. I consider London to be one of the most fashion forward cities in the world so I was thrilled to have the chance to explore its chain boutiques (Next, Oasis, River Island, Miss Selfridge), its top super stores (Topshop, H&M, Selfridges), its markets (Camden Lock, Portobello Road), and of course, the mecca of all shopping, Harrods.

In the past, I’ve come home from London with my suitcase bursting at the seams ready to bring high fashion to where ever I called home. Typically, the fashions have been cutting edge, gorgeous, and just what I wanted to wear. Apparently, I’ve outgrown those days. After a few minutes in Topshop, I felt like a grandma. I can’t wear satin jumpsuits. Or sequined hotpants. Or midriff baring sweat shirts. And I absolutely refuse to wear rolled up denim shorts with embellishments. Or baggy hot pink sequined pants.

And so I’m having a bit of an identity crisis. In the past, I’ve always looked to places like Topshop for my style ideas. I’ve occasionally emulated Mischa Barton or even an Olsen twin or two in my attire choices. But if these are the styles, then I have a feeling that those days are quickly drawing to a close.

I was in a state of despair after leaving Topshop, certain that long days of shopping at Talbots and Ann Taylor were ahead of me. After all, if I couldn’t wear Topshop, certainly my days of style were numbered.

Then I went to Harrods. As it turns out, most of the world isn’t wearing clothing that looks like the love child of MC Hammer circa 1985 and the cast of Cats. In fact, there are some absolutely beautiful and sophisticated clothes out there that are both style savvy and attractive. I fell in love with this shell bead dress by Milly and this botanical print suit by Missoni, among many others.

Of course, Harrods is in a price range I can only dream about, but none the less, I felt much better after my trip there. I suppose that eventually hotpants and sequined pants will make their way to Charlotte. And, as someone who appreciates all attempts at something new in fashion, I’ll applaud those of you who wear them. But I won’t be joining you. I lived through the 80’s once and that was enough for me, thank you very much.