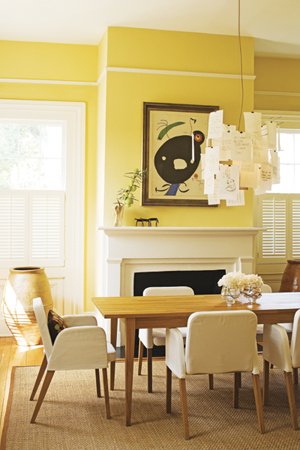 Until early 2002, Trish and Craig Hevey were real estate serial monogamists, jumping from city to city—Philadelphia, Milan, Madrid—to follow Craig’s job in international banking. But that changed when they discovered the historic Chairman Blake house in Davidson.

With Charlotte looking like the next stop on the Hevey world tour, Trish flew in from Spain, where they were living at the time, to scout out a place where they could settle down with their three kids, Gillian, now seventeen, Clay, fourteen, and Justin, eleven, and dog, Guapa. Driving through Davidson, she was struck by the college town’s small, close-knit charm and walkable neighborhoods, features Trish—who had grown up in a subdivision — more than appreciated.

Then she came to the Greek revival cottage that stood on a downtown lot, and she was captivated. The front porch, flanked by a set of architectural columns, looked warm and welcoming. "The columns are so simple and quiet, but really make a statement," she says. And their symmetry appealed to Trish, who has been drawn to mirror images for as long as she can remember. "I am the sister of twins and the daughter of twins, so I’m most comfortable around sets of two. And this house has perfect symmetry." Even inside, four equal-size parlors on the first floor were split down the middle by a hallway leading to a screened porch.

Although vacant at the time, the 3,000-square-foot house was well known around Davidson. It was built in 1861 as the home of John Blake, a faculty member and one-time college chairman of Davidson College, according to a report by the Charlotte-Mecklenburg Historic Landmarks Commission. After Blake’s death, it became college property, and housed countless faculty members until the turn of this century. In 2002, the college sold the property to a developer, knowing that the historic landmark designation the Blake house received in 1979 would save it from the wrecking ball. The entire house was moved several hundred feet to make room for a pharmacy, and it had sat empty since.

Despite her instant connection with the house, Trish flew back to Spain without making an offer on it. The interior was livable, but considerably dated, and there wasn’t enough room for a family of five to live comfortably. Plus, the house’s historic landmark designation meant that any renovation would have to be approved by the commission. It was too much of a logistical nightmare to pull off, especially from thousands of miles away.

But Trish couldn’t get the house out of her mind. Back in Spain, she checked online constantly to see if it had been sold, and even paid for a structural analysis. Finally, in December, she and Craig decided to take a gamble. "It was the biggest leap of faith, but the house just struck us as totally unique and very Southern," says Trish. "We knew we’d never find anything else like it."

Before they could say adios to Madrid, the Heveys needed to update the 141-year-old house to suit their modern family of five. That meant adding a master bedroom and two bathrooms, expanding the galley-size kitchen, and adding a detached garage and screened porch.
Trish recruited Charlotte architect Lindsay Daniel and contractor Andrew Roby to help make the necessary changes. They worked long distance on the yearlong renovation, e-mailing designs and blueprints back and forth and researching sinks and fixtures online. "I had such faith in Andrew and Lindsay," says Trish. "They loved the house as much as I did."

Thanks to clever reuse of space, the Heveys only had to add 500 new square feet to the house. Walk-in attic space on the second floor was converted into a master bedroom, with a new eyebrow dormer to add light. A downstairs closet became a bathroom. The galley kitchen was repurposed as a laundry room, and a more spacious kitchen was installed in one of the four downstairs parlors.

Once the remodeling dust had settled, Trish turned her focus to decorating. "The house is a cottage, not a mansion," she says. "It is classic and stately but not fancy. I wanted it to be kind of humble without being too cutesy or cottagey." To achieve that goal—and balance a rustic feel with her modern aesthetic—she used natural materials: wood and glass, marble and wrought iron, and natural fibers like sisal.

In the revamped kitchen, white-painted cabinets and trim, and glass-fronted doors open up the space. "I wanted it to look like the cabinets had been here forever," Trish says. "They were almost part of the architecture, so I decided to go with a 1920s look."

Most of the furniture, accents, and artwork are pieces the Heveys collected during their years of traveling. In the living room, a wrought iron music stand from a Madrid antiques dealer holds a work of art purchased in Pedraza, Spain. In the kitchen, old duck decoys top the shelves and a painting by an Italian artist spans a wall. In the den, an armoire from Asia holds the television. A modern art lamp from German designer Ingo Maurer and original artwork by Miro hang in the dining room.

As an homage to the Heveys’ previous life in Madrid, the new detached garage houses a wine cellar with Spanish tile on the walls, a round tasting table, and a hand-made Castilian pine door with hand-hammered iron work on the lock and handle.

Thanks to a year of preparations, when the Heveys finally moved into the Chairman Blake house in the fall of 2005, it already felt like home. In the summer, the family enjoys the town’s Concerts on the Green from the front porch that caught Trish’s eye years ago. Clay even made the house the subject of his seventh-grade essay about his most prized family treasure. Finally, they’ve put down roots and are ready to start building a past of their own.

This article appears in the Home & Garden July 2008 issue of Home + Garden.
Categories: Home & GardenFeature, Spaces
Contest of the Month